Florida: Where People Are Weird and Strangely Good at Paying Student Loans

Aside from the alligators and burritos used as weapons and manatee-riding yahoos we have in Florida, the Sunshine State and California have a lot in common.

Both have economies driven by tourism and population growth, and they rank third and first, respectively, on the list of the most populous states.

When it comes to student loan debt, they’re also similar. Each state’s adult population has around $4,500 per capita in student loan balances.

But over the last decade, the rate of severe student loan delinquencies  — defined as loans for which a payment hasn’t been made for 90 or more days —  has climbed 22% in California, while it declined 11% in Florida, according to the Federal Reserve Bank of New York’s consumer credit survey data from the fourth quarter of 2017. In the last year alone, Florida’s rate of severe student loan delinquencies fell 26%.

For some more context, Florida’s severe student loan delinquency rate sits at 9.35% right now, making it the 10th lowest in the U.S. In 2007, Florida had the fifth-worst delinquency rate at 10.52%.

Florida and Wyoming are the only two states that have seen these delinquency rates shrink compared to 10 years ago. Wyoming, the least populous state in the U.S., experienced a more modest 3% decrease in delinquency rates.

Overall, the delinquency rate across the U.S. jumped 46% over the last decade.

So what exactly is Florida seemingly doing so right when it comes to actually paying back student loans? Like most things in Florida, the answer is pretty dang elusive.

The communications department for the Florida Board of Governors, which oversees the State University System in Florida, did not return a call for comment. Neither did the the Federal Reserve Bank of New York.

Likewise, spokeswomen for both the Florida State University and the University of South Florida colleges of education said none of the professors at either school could discuss the topic. 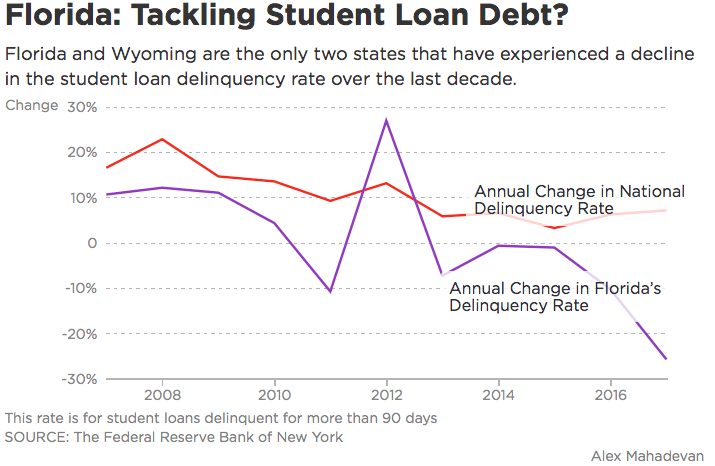 The numbers don’t necessarily say anything about the specific colleges in each state, because someone could easily rack up a load of student debt in one state, then move to another and be counted in this survey.

Goods, services and rents are about 2% cheaper in Florida than the U.S. as a whole, according to regional price parities recorded by the U.S. Bureau of Economic Analysis. But there are massive amounts of serious delinquencies in much cheaper states, such as Kentucky, where student loan delinquency rates have skyrocketed 132% since 2007.

The economy in Florida appears to be on a roll, but with a 3.7% unemployment rate, it sits in the middle of the pack, according to the U.S. Bureau of Labor Statistics.

I could go on and on. But instead of boring you with more numbers, I figured I would just opine on why exactly we crazy Floridians seem to be getting more responsible with our student loan debt.

10 Alternative Theories About Why Floridians Are Paying Their Student Loans

There’s either some interesting reason Florida’s delinquency rate has fallen that we just haven’t figured out (but I will write an update for you if I find it) or it’s just a demographics thing — the kinds of people who pay their loans on time happen to be outnumbering those who don’t in Florida.

Either way, I couldn’t just leave you on the edge of your seat, wondering what makes Floridians so responsible.

So I polled my fellow Penny Hoarders at our headquarters here in St. Petersburg, Florida, to see what they think is going on. Here are 10 reasons we think student loan delinquency rates are falling in Florida.

So to all you non-Floridians saddled with student debt, c’mon down to the Sunshine State. The only thing you have to lose is a few fingers in a gator wrestling match.

(And for anyone who has a legitimate explanation for the decline in the serious student loan delinquency rate in Florida, shoot me an email at [email protected].)

Alex Mahadevan is a data journalist at The Penny Hoarder. He’s a born-and-bred Florida Man, but he couldn’t have come up with this list without the help of his hilarious co-workers.