The Labor Market Just Hit a Milestone. Why Can’t You Find a Job?
see more from Career

The Job Market Is Hot. Here’s What It Means, and How You Can Stand Out

Updated June 12, 2018
From left, Grey Lyons finishes up a virtual job interview as Majesh Antony waits to get a resume critique during the Goodwill Community Job Fair at the EpiCenter at St. Petersburg College in Clearwater, Fla. Tina Russell/The Penny Hoarder

In April, the number of open jobs in the U.S. surpassed the number of folks looking for work for the first time since the U.S. Bureau of Labor Statistics started tracking the numbers in 2007. There were 6,698,000 available jobs but only 5,932,000 job seekers — a difference of more than 766,000. 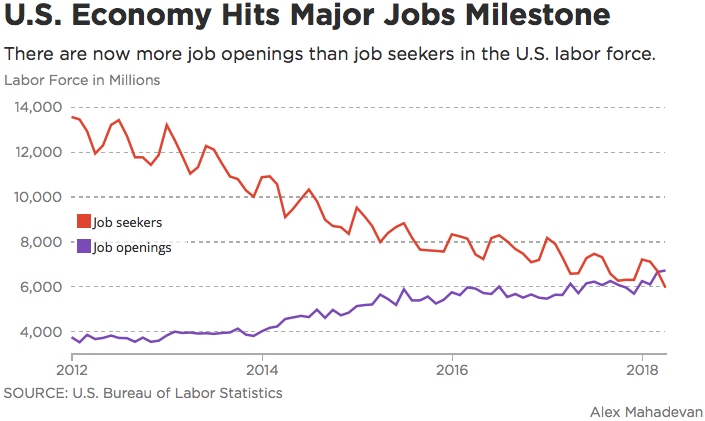 While this does show the strength of the U.S. economy and a tightening labor market, it doesn’t mean you can just walk out in your front yard and proclaim, “One job, please!”

I mean, you could, but it would look pretty funny.

“There’s nothing magical about reaching one job opening per unemployed worker,” said Jed Kolko, chief economist at Indeed. “It doesn’t literally mean that everyone who wants a job can get one.”

Since these are national figures, it could theoretically mean that there are plenty of jobs two towns over, but none in yours. And different jobs require different skills, so the unemployed just might not have the abilities that employers with openings are looking for.

“Also, some people have given up looking for work and therefore aren’t counted as unemployed, even though they might be interested in working,” Kolko explained.

But, don’t despair — we’re always posting open positions on The Penny Hoarder Jobs Page on Facebook. And there are plenty of ways to stand out in the crowded job market.

The ratio of job listings to job seekers may be deceivingly positive. But still, there is a record number of job openings in the U.S. and the unemployment rate continues to fall to post-recession lows.

“Payroll growth has been strong and steady, and well ahead of the level needed to keep up with population growth,” Kolko said.

So, how do you get your hands on one of these open jobs? Invest in yourself. 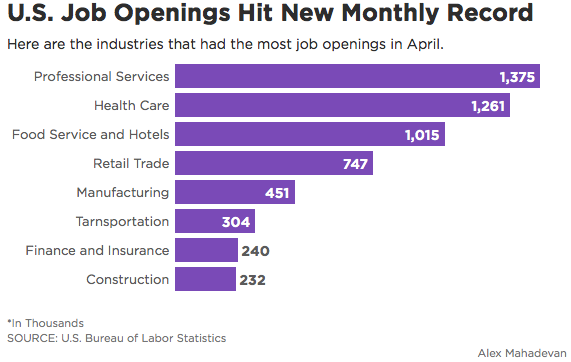 For one, you’ll need to dust off that resume or stop procrastinating and write one already. And while you’re at it, go ahead and write a cover letter to slap on top of it — these are more important than you think.

Next, don’t neglect your LinkedIn page, which can be a crucial networking tool in the search for your dream job. Here are some expert tips for sprucing up your LinkedIn that only take 30 minutes.

If you’re looking for a work-from-home job, you might want to start stocking up on supplies to create a home office.

And finally, when you do land an interview, make sure to prepare for 20 common interview questions you might face.

So don’t be discouraged when you see all the press about the latest job openings figures, even if you’re having a particularly tough time finding a gig. By just taking a few hours to spruce up your professional profile, you can stand out in any job market.