Wondering When to Ask for a Raise? How About Tomorrow?
see more from Career

Who Got the Biggest Wage Hikes in 2017? The Answer Might Surprise You

Now that we’re solidly into 2018, you’ve probably already smashed your fitness goals, saved a ton of money and finally asked your boss for a raise.

No? Well, me neither. But today I’m going to tell you why you need to do one of those things as soon as humanly possible.

It’s time to ask for a raise. Yes, even if you don’t have a college degree that we covet so much here in the U.S. In fact, if you don’t, you’re in a much better position to get a raise.

Last year, weekly wages rose less than 1% for all workers, according to data released by the U.S. Bureau of Labor Statistics this week. But if you take a closer look, you’ll see that pay jumped 2.3% for those without a high school diploma, and the same amount for folks without a college degree. 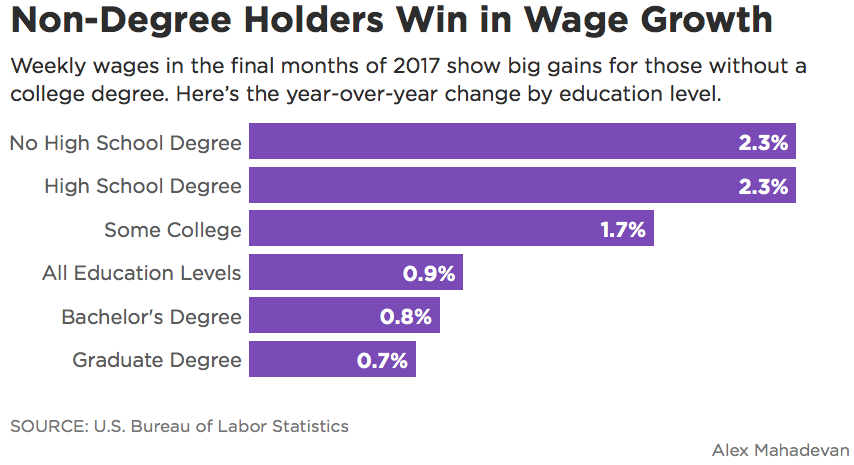 Companies are having a tough time retaining and recruiting so-called low-skill workers (this is just economist-speak for people without a college degree), according to reports from the U.S. Federal Reserve’s Beige Book.

Obviously, those with a degree still make much more than those without, but it’s always encouraging to see those most in need get larger bumps in pay.

We already know you don’t need a college degree for a lucrative career path. And we’ve shown how much you can make in a field like construction. But how do you ask for a raise once you’ve landed a job as a non-degree holder?

No Degree? Here’s How to Ask for a Raise This Year

If you’re reading this and you haven’t received a raise in a while, now is the time to consider asking for one. The economy is booming and the government just passed a new tax bill that has corporations upping U.S. investment and touting pay bumps.

But, asking for raise can be pretty freaking scary, right? Imposter syndrome is something I struggle with on a daily basis.

This guide will walk you through six strategies to nail that raise request.

Make sure you do your research on wages for your job, or comparable gigs, using the Bureau of Labor Statistics or private job-search companies. Then, tie the raise to your performance — find some way to put your work into numbers.

And here’s a weird one: Ask for an odd amount. Research has shown that staying away from round numbers might yield a higher raise. For example, ask for $41,766 instead of $41,500, and you might make out with more money.

So next time someone tries to sass you for not having a college degree, just tell them about that fat raise you just got.