Ipsos Review: Here’s What Happened When We Took Surveys on I-Say

What’s an easier way to make money than survey sites?

Nothing, really. You literally answer questions and give your opinion about any and everything.

But how do you know which sites are legit and worth your time? We’re here to help.

We checked out i-Say from Ipsos, one of the most popular survey sites on the web, to see what it’s really like — and how much money we could make.

Signing up for i-Say is easy, and it seems like they really want to get to know you.

Between introductory multiple choice questions, there are a few opportunities for you to type your own answers. The major focus of this site is making sure your voice is heard, which makes sense considering its name.

The site allows you to say what you think as a consumer about certain products and wants to know why you buy what you buy. 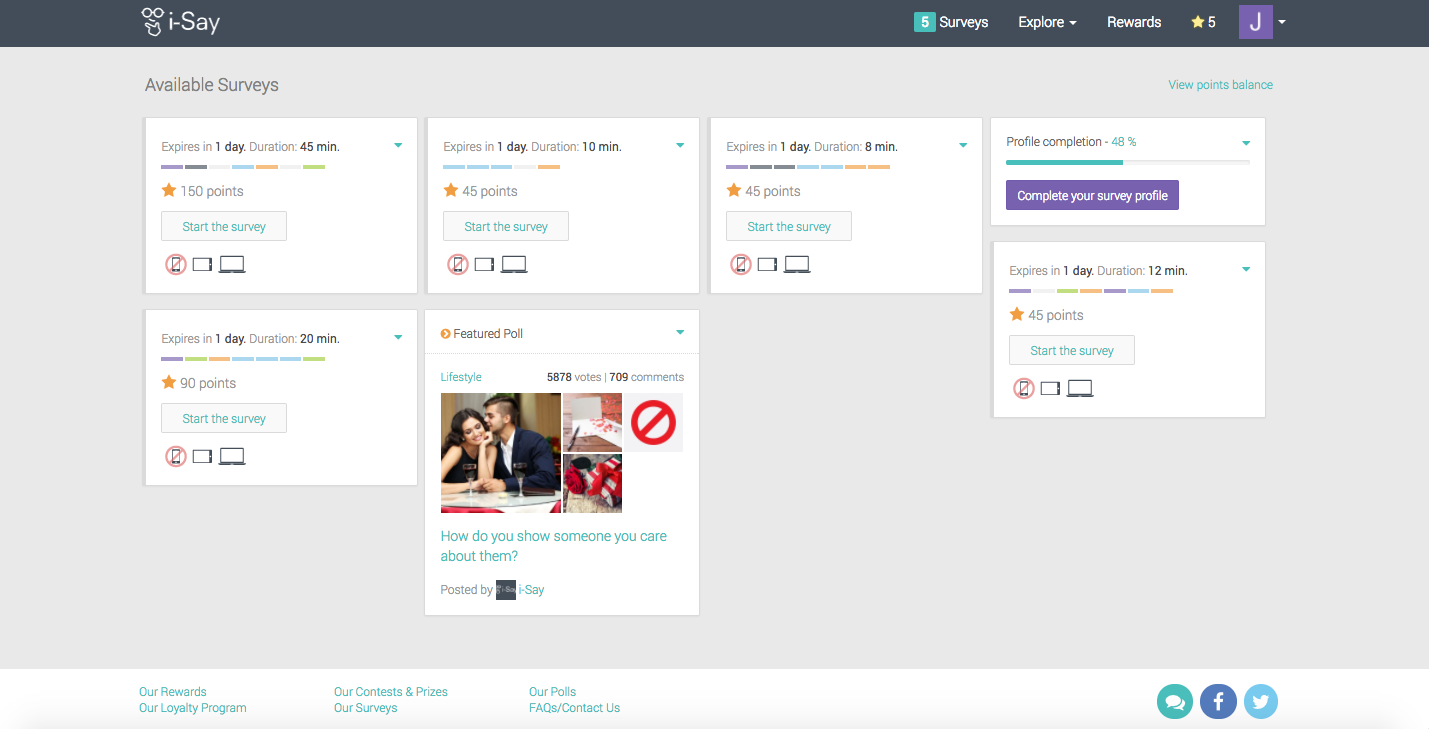 What I really like about this site is it’s not only easy to navigate, but it’s also reassuring. I know it’s just a survey site, but it seems like it wants to make it as painless as possible.

The site knows you hate answering the same questions multiple times, but lets you know upfront that it happens. It’s just the site’s way of making sure you give consistent, quality answers and still qualify for the survey’s demographics. 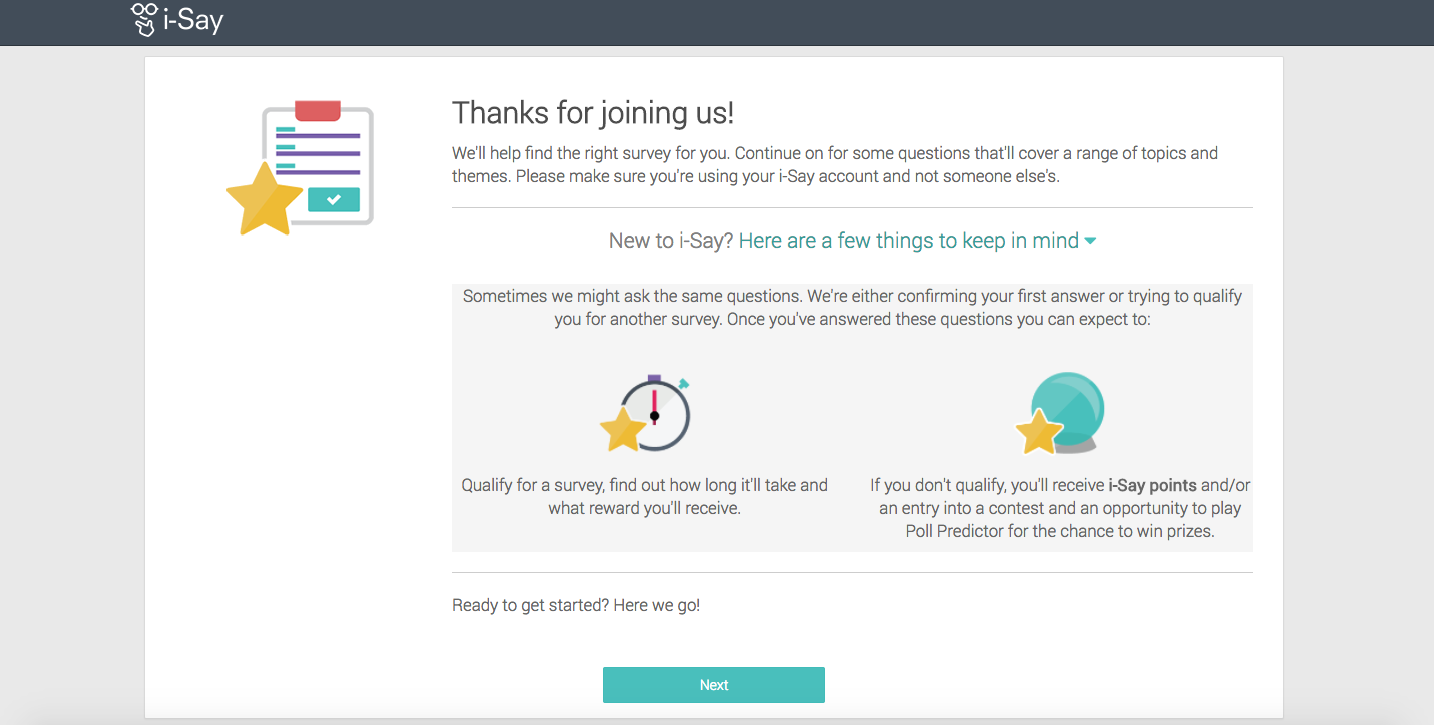 Once I made my account and signed in, I already had five surveys waiting for me.

If you don’t end up qualifying for a survey, you get to play a guessing game called “Poll Predictor.” In this game, i-Say users were polled on a question, and you have to guess what percentage said yes. The closer you are to the actual answer, the more chances you get to enter into drawings for a prize.

This quick game makes being disqualified for a survey a little less frustrating.

For example, my question was “What percentage of women said they have danced the Macarena?” I know, it’s a bit silly. But it was a nice change of pace between clicking from survey to survey. 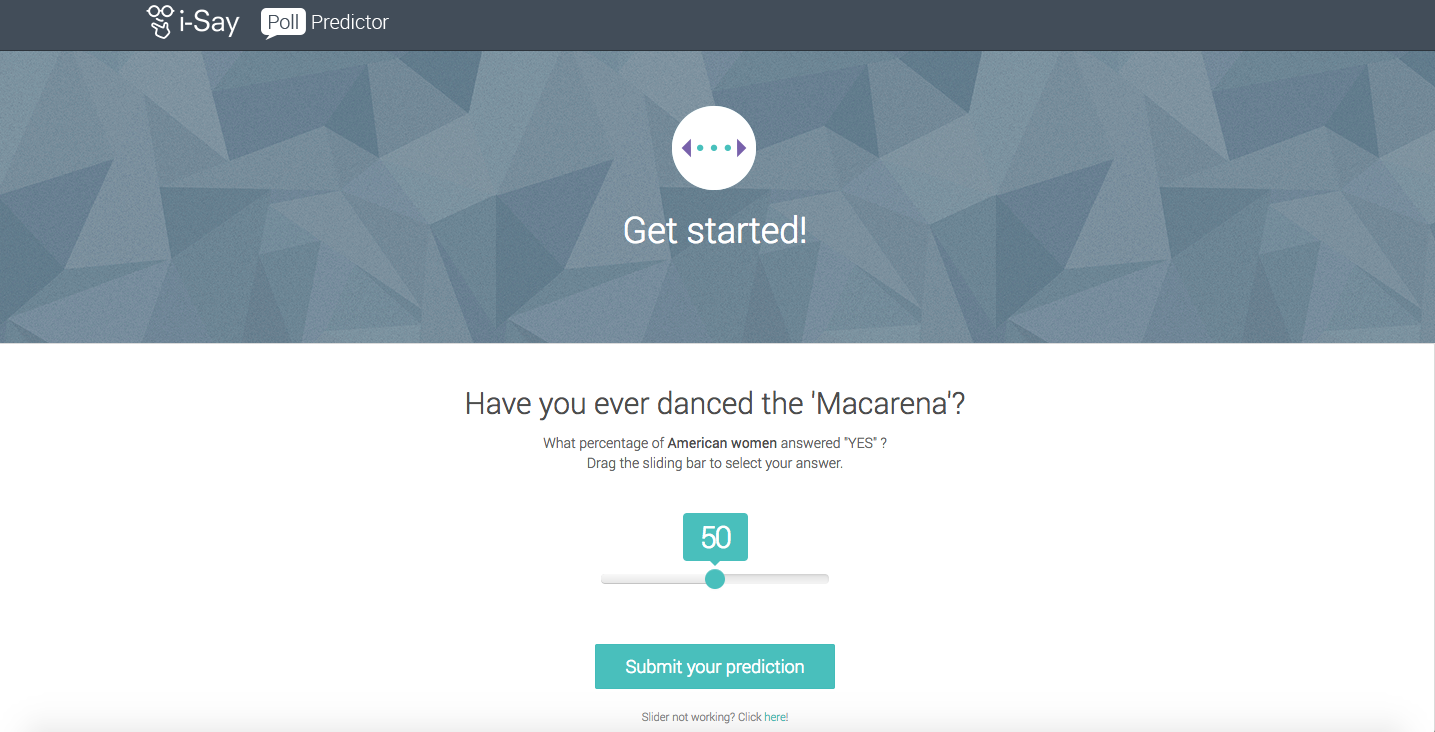 Each survey awards you points that can be redeemed for gift cards. Or, you can cash out with PayPal. The lowest amount of points you can redeem is 500, which is $5. So, one point equals one cent — 100 points equals $1.

Another plus? The site has a solid rewards selection, from eGiftCards to Starbucks, Target, and Amazon, as well as Visa prepaid cards or just cold, hard (PayPal) cash.

I’ve only had my account for a few days, so I haven’t accumulated enough points to cash out yet. Some people had negative things to say about how long it takes to receive your rewards once you cash out, so I looked into it.

The site states it takes 3-4 weeks for PayPal funds to be delivered, and 4-8 weeks for Visa cards or any other card sent by mail.

I’ve been a part of other survey sites that take a few weeks — or even months —  to get your rewards, but I knew ahead of time and didn’t count on them to arrive quickly. This doesn’t chalk up to a negative in my book, and it only counts for a select few of their reward options, so it’s easily avoidable.

If you don’t want to wait a few weeks for your money, opt for the one of the eGiftCards — they’re instantly sent to your email. 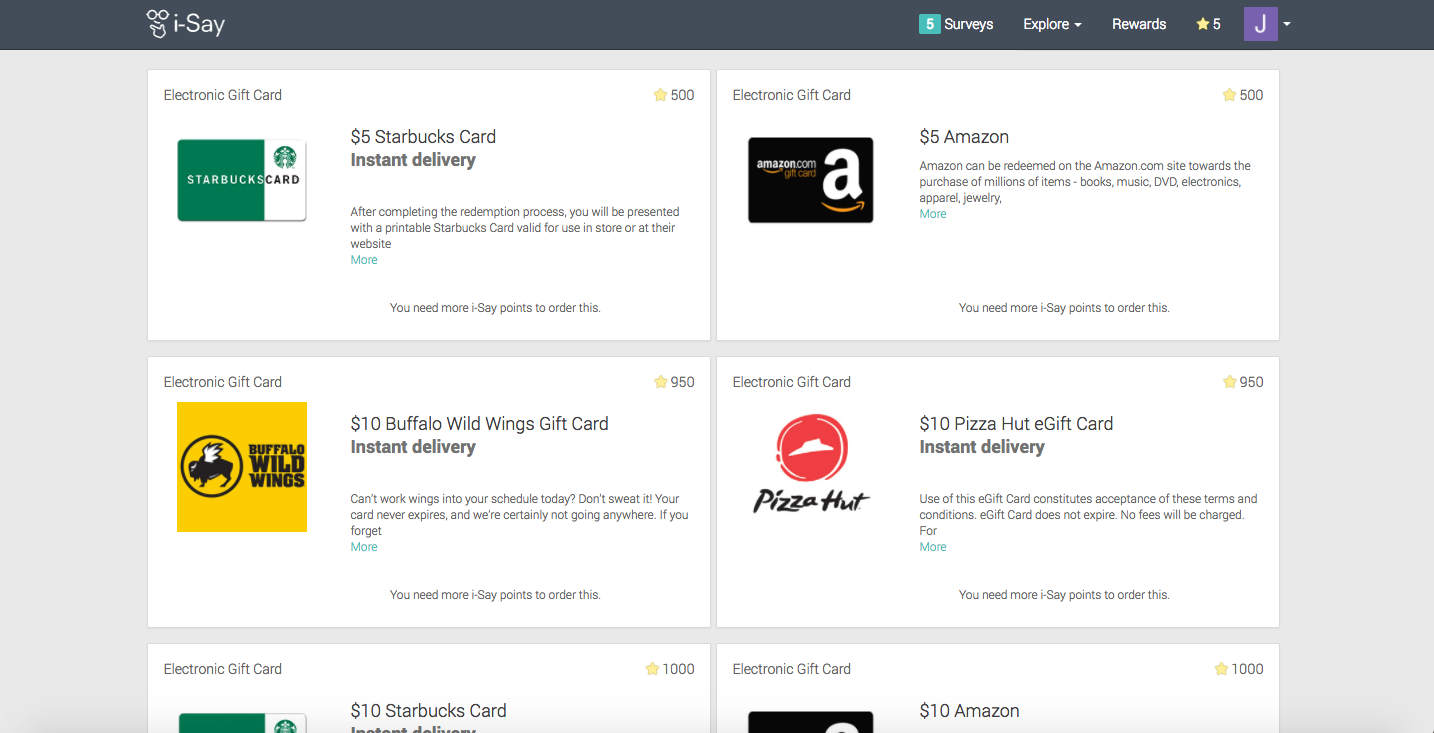 If you don’t want your email inbox blown up by surveys, you could opt for text notifications.

Usually survey sites will send me a ton of annoying emails about available surveys, and reminders to take them if I haven’t yet. Luckily, i-Say is not one of these notorious inbox clutterers.

The site also doesn’t send you as many surveys as typical survey sites. The FAQ page states you’ll receive an average of eight survey invitations per month. This may not seem like a lot, but it should be enough to get you to the $5 minimum needed to cash out. 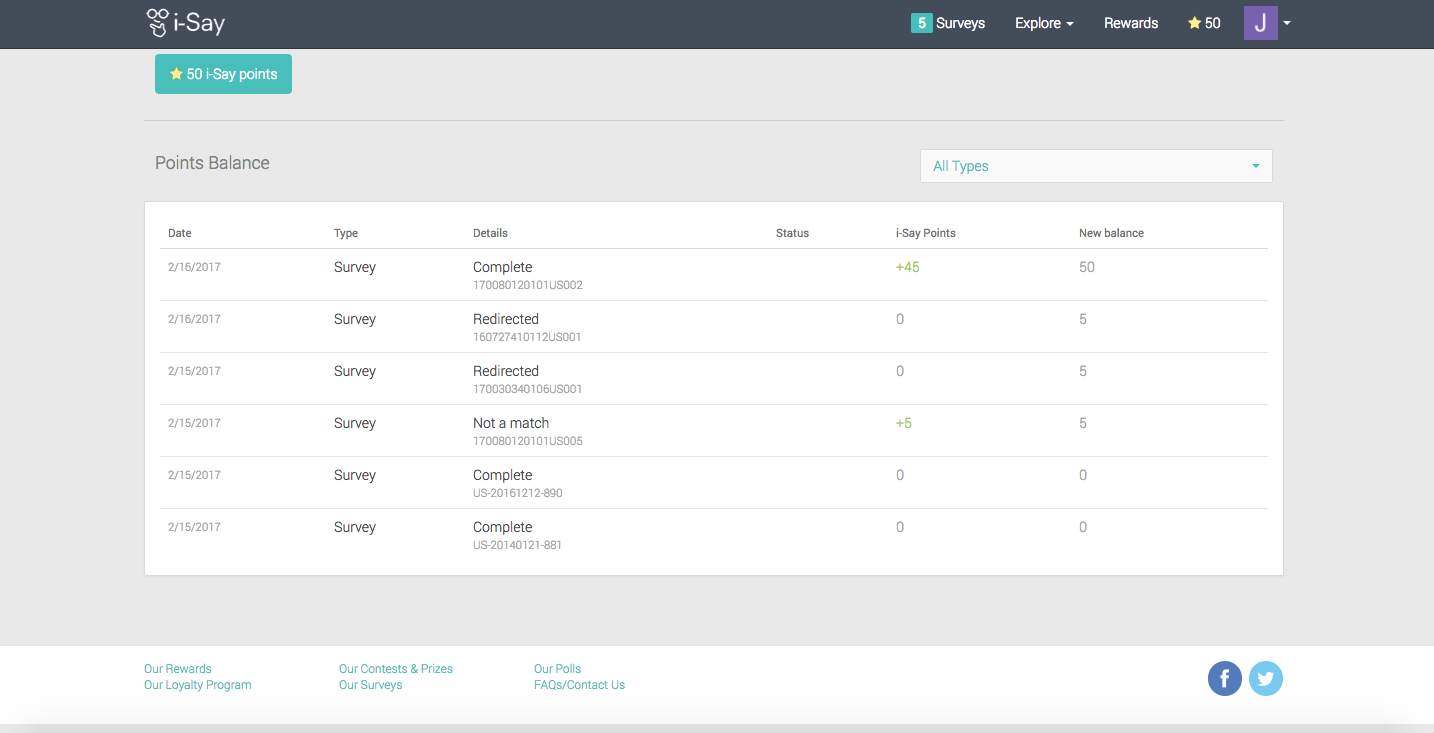 You can see the list of surveys you’ve taken, and even the ones you were disqualified for.

As you can see, I haven’t taken a ton of surveys yet. My first two completed surveys earned me zero points because they were intro surveys asking about my shopping habits, household, and other demographic traits.

The surveys I took were interesting and interactive, mostly about certain products I buy.

To me, i-Say stands out among others because it’s “dedicated to giving you a voice” and taking “your feedback straight to those who have the power to influence change.”

What more could a consumer want?

This site is all about voicing your opinions and rewarding you for your perspective. This survey panel is a good fit for anyone who wants their views to be heard and enjoys instigating change.

And for those who want to make some easy money…

Jacquelyn Pica is an Editorial Intern at The Penny Hoarder.