The Scariest Seasonal Jobs: Get Paid to Become a Zombie
see more from Side Gigs

Wanted: 700 Zombies to Scare the Daylights Out of Theme Park Visitors

You might be able to relate to the humans fleeing the zombies on “The Walking Dead.”

But have you ever thought about being one of the zombies?

Now’s your chance to find out what it’s like to be a flesh-eating, undead creature — and get paid for it.

Busch Gardens Tampa Bay is looking for 700 zombies to staff its popular Howl-O-Scream attraction, just in time for Halloween.

This could be your time to shine. Or grunt and ooze fake blood.

How to Land One of These Busch Gardens Jobs

People flock to the award-winning Howl-O-Scream event for scares and thrills and maybe some pants-wetting.

It was the thing to do when I was in high school, and it scared the shoes off me. Really, that happened one time. I had to tearfully retrieve my abandoned flip flop from a chainsaw zombie clown.

But it was a darn scary clown, and that’s where you come into the scene.

Each night, Busch Gardens’ makeup artists will transform you into a scary, undead creature. You’ll be placed in a dark haunted house to scream at, follow or taunt the visitors who wander through.

You don’t have to have any prior zombie — or acting — experience to snag this seasonal gig.

Costumes are provided, though you need the staples: a pair of black pants and black shoes.

There are some physical requirements — a lot of standing, walking or strenuous activity at times. No matter which outpost you’re assigned to, you should be able to perform your character for up to two hours at a time.

Ready to Become a Zombie? 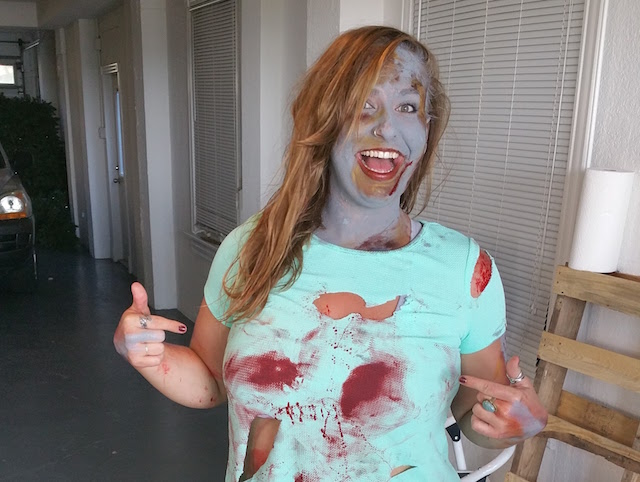 Complete the online application. It only takes about 15-30 minutes.

Then show up to one of the open auditions held now until early September. Arrive in comfy clothes, and hold off on zombie clothes and makeup; you’ll be asked to wash it off.

Step behind “The Gauntlet,” a wall flanked with secret windows that slam open and shut. Your job is to jump in and be that creepy, lingering zombie with perfect timing.

You’ll also participate in some improvisational games. Ben DeWitt, the Howl-O-Scream Entertainment Project Manager, told Bay News 9 it’s not uncommon for would-be zombies to be asked to act like something totally silly, like an octopus that drank too much Red Bull.

If you can pass the fear and fun tests, you’re hired. You’ll go through a series of trainings to become your best possible zombie-self. You also get a backstory, which will inform you how to act, walk and what noises you make.

Your Turn: Do you have the guts to work in a haunted house?

Carson Kohler (@CarsonKohler) is a junior writer at The Penny Hoarder. After recently completing graduate school, she focuses on saving money — and surviving the move back in with her parents. If she can’t, she might become a zombie.

The Penny Hoarder Favorites
February 28, 2021 If You Have More Than $1,000 in Your Checking Account, Make These 5 Moves
by The Penny Hoarder
10 Hours Ago 50 Ways to Make Extra Money This Month
by The Penny Hoarder
March 3, 2021 17 of the Absolute Best Freebies We’ve Ever Found Online
by The Penny Hoarder
April 23, 2020 When Money is Tight, These 7 Resources Will Help Nearly Everyone
by The Penny Hoarder
Trending
January 15, 2021 Receiving Jobless Aid? Don’t Miss This Deadline or You Might Owe Money
by Adam Hardy
February 25, 2021 How to Make Money Online: 31 Simple Ideas to Cash in On
by Dana Sitar
January 27, 2021 $400 Weekly Unemployment Checks Coming for Some ‘Mixed Earners’
by Adam Hardy
January 8, 2021 $300 Weekly Jobless Payments, Extended Programs and More in Second Stimulus
by Adam Hardy
You May Also Like
16 Hours Ago How Much Do You Get Paid to Donate Sperm? All Your Questions Answered
by Dana Sitar
10 Hours Ago Vintage Clothing Business Insider Hints From 3 Entrepreneurs
by Elizabeth Djinis
February 27, 2021 Your Grandma’s Hobbies Are Back In Vogue as Trendy Side Gigs
by Adam Hardy
February 26, 2021 Grocery Deliverers Can Turn Their Gig Into a Business With the Dumpling App
by Adam Hardy
6,878,387 209,770 1,200,000 132,249 6,856,929 4,429,615 8,210,636