Get the Most Bang For Your Airfare Buck: These 10 Routes Are Cheapest

One: I’m sitting here slack-jawed that 2018 is already a quarter of the way over.

And two: It’s just about time to start thinking about a vacation.

You’ve made it through the major holidays and have hopefully paid off that credit card you loaded up with debt to buy all those Christmas gifts  — unless you’re a millennial, that is.

But flying ain’t cheap. The 1,020,408 million people who flew every day last spring paid $233.98 on average for a one-way ticket to wherever they happened to be going in the U.S., excluding Hawaii and Alaska, according to a Penny Hoarder analysis of the latest available data from the U.S. Department of Transportation.

And that doesn’t even include the extra charges for baggage fees, an extra centimeter of leg room or the ability to choose your seat. (I’m an aisle guy, myself.)

But, even last spring, when the average plane ticket increased 1 ½ cents per mile compared with the previous year, we were able to find some promising one-way routes well below that 28-cents-per-mile average. (Check out a more general list of the cheapest travel destinations for 2018.) 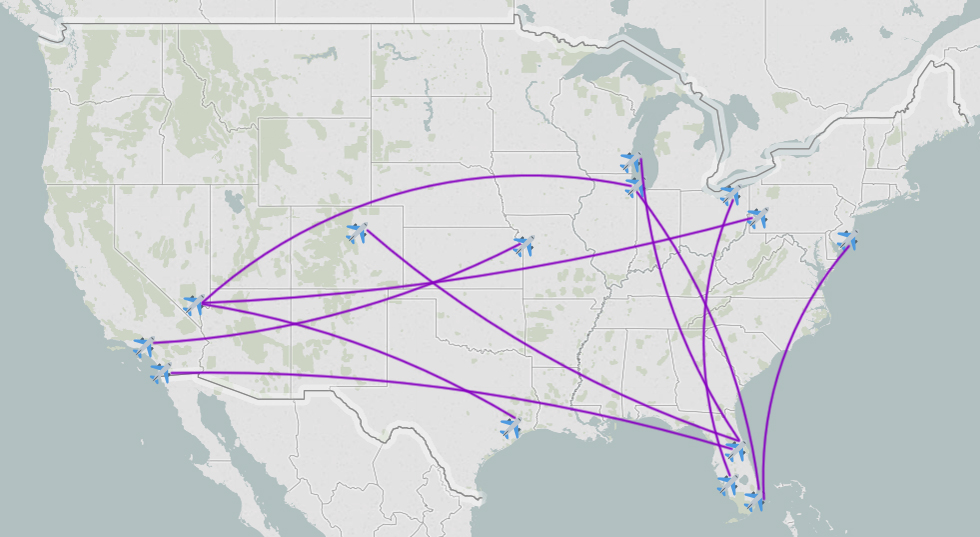 We even highlighted the carriers most likely to have tickets on the cheap end of the spectrum.

The catch: Travel search sites such as KAYAK and Expedia can have big swings in ticket prices resulting in much lower costs for plenty of routes on this list — and ones you you won’t see on this list — but we wanted to go right to the government source to get you the most stable pricing numbers.

And 2017 prices may not necessarily dictate what you’ll see this spring, but it’s a good start. Plus, as we mentioned above, these averages don’t include baggage fees and other nickel-and-diming airlines have gotten so good at.

So, if you haven’t figured out your dream journey to break up the first half of 2018, here’s a start.

When I first dug into all the numbers, one thing stuck out: Las Vegas, Nevada, and Orlando, Florida, offer the cheapest outgoing and incoming flights for tons of cities across the U.S. So, you know, if you’re into blackjack or Mickey Mouse, you’re in luck.

Oh, and if you consider deep dish pizza actual ’za, Chicago should have plenty of low-airfare opportunities.

Either way, there’s a destination for most folks on this list. One note: these are average ticket prices across all airports serving each city.

Here are the 10 flight routes that will give you the best bang for your buck in Spring 2018:

Find a Cheap Spring Flight For Your 2018 Adventure? Here Are Some Travel Tips

So, let’s say you live in Houston … or Orlando, Las Vegas, Miami or Cleveland, and you found a trip destination that works for you. There are plenty of other ways to be a true Penny Hoarder — even on a vacation.

First, once you settle on a destination on this list (or elsewhere, for that matter), here’s one simple way you can save on airfare right away: Don’t buy plane tickets on Friday. Apparently, TGIF doesn’t apply to airfare.

And instead of just settling for a boring old hotel, sign up for Airbnb and you could even stay in something as cool as a tent in someone’s backyard. (If that’s, uh, your sort of thing.) But seriously, I’ve saved hundreds staying in spare rooms in places like Orlando, Savannah, Georgia, and St. Augustine, Florida.

And to get around, (especially if you’re traveling solo), try Uber and Lyft — or even a bike-share service — rather than renting a car.

As for food, make your own if you’re at an Airbnb with a kitchen. But also hit up local happy hours and try to eat where the locals do. Your wallet will thank you.

Now, go forth, Penny Hoarders, and take that last-minute vacation. I could definitely use one.

Methodology: The Penny Hoarder weighed the cost-per-mile, average ticket cost and cheap ticket cost to create an initial list of cheap spring flights based on U.S. Department of Transportation data from the second quarter of 2017. Then we geocoded the data to map the routes and determine the 10 with the best coverage of the contiguous U.S.

Alex Mahadevan is a data journalist at The Penny Hoarder. His next big trip is to St. Augustine, and he totally plans to ball out on a budget.