An Iceland Vacation for Two for Under $2,300 is Totally Possible
see more from Save Money

Two days before I left for Iceland, I pored over a database of all the Americans who have died there since 2002.

I would probably end up an unknown incident — head-butted by an ornery sheep or pecked to death by a colony of puffins. Maybe that 500-year-old shark would swim from Greenland and have me as a snack.

OK, so these are all totally irrational thoughts. But, there is one realistic, super anxiety-inducing aspect of a trip to Iceland: the price.

Food prices are double or even triple that of the United States. The cold weather means packing a lot, which translates into airline fees for extra luggage. And the vast countryside is best explored through renting a car — sometimes an extra $100 for an automatic vehicle.

But my wife, Justine Griffin, a fellow journalist, and I managed to make the whole trip for around $2,300. Hotel. Airfare. Food. Everything.

Here are some general tips for doing it like we did.

For Your Iceland Vacation, Consider a Group Travel Agency

We spent $1,500 to book our jaunt to Reykjavik through Fleetway Travel, a U.K.-based company. That included five days and four nights in a hotel in the heart of the city and free breakfast at the hotel every day.

As of Oct. 3, there was one deal for a round-trip flight to Iceland through WOW Air clocking in at $484. With lodging at Hotel Leifur Eiriksson (where we stayed) currently costing about $150, we’d still spend nearly $1,300.

And that would give you only two nights to explore the country in early November, when the weather starts getting ugly.

We could have probably pieced together a trip for less than $1,500 by buying everything separate and relying on Airbnb or hostels for cheap lodging. For us, it was worth having a company take care of everything in a country we knew nothing about.

Plus, that free breakfast perk ended up saving us as much as $200. I’m still thinking about those waffles.

Here are a few tips for booking your Iceland vacation:

Focus on the Great Outdoors — It’s Free, After All

All of the things I just listed can be found all over the country — and for free.

We rented a car ($200) on our second day and managed to see dozens of these natural wonders across the Snæfellsnes Peninsula, which is about two hours north of Reykjavík. With about a half tank of gas (roughly $47), we drove five hours around the peninsula to see Ytri Tunga, the seal beach, Budir, a beach with a bird colony and charming old church and the iconic Djúpalónssandur, a black lava pearl beach.

We honestly could have split this into two days, but considering our time in Iceland was limited, we hustled through this stretch of the trip.

On our third full day, we drove 45 minutes south ($30 in gas) of Reykjavík to a town called Hveragerði. From there, we hiked an hour into Reykjadalur Valley, where we changed into our Florida togs to bathe in a 100-degree thermal river.

But, we also climbed into a ravine we happened upon on the side of the road, petted wild Icelandic horses and stopped at least five times to simply marvel at the countryside.

In Iceland, everywhere you look you’ll see something that amazes you. We chose to do Snæfellsnes, but you could easily drive an hour north or south of Reykjavík and see dozens of wonders.

And you don’t have to hike an hour — just pull off to the side of the road. As long as you’re far enough from a city, you can see the northern lights from anywhere that has clear skies.

Pack for Rain, Rain and More Rain, but Be Stingy With Outfits

When it was all said and done, I wore one pair of jeans the entire time we spent in Iceland. I wore two flannel shirts, two pairs of socks, one set of long johns, and, my most expensive purchase, a pair of Lands’ End duck boots I got on sale for $50.

Then I just had a jacket and ski pants in case of bad weather. WOW, the airline we flew, charges more than $55 for checked luggage and $45 for an additional carry-on.

As a Florida native used to changing outfits multiple times a day thanks to our never-ending summers, I was hesitant to pack so little at first. But it stays so cold in Iceland that I found myself passing my wife’s rigorous smell test — even after hiking in the same jeans for three days.

Unfortunately, our rainproof gear was too bulky, so we did end up spending the extra $55 to check a bag. One thing you should keep in mind is that WOW in particular is extremely serious about the 44-pound bag limit. So much so, that two hours before our flight I lugged the bag to the nearest Publix to weigh it.

I can only imagine what patrons thought of the guy hauling a suspiciously large piece of luggage into a grocery store.

The boots, jacket and ski pants ended up being lifesavers. We were able to see wildly popular attractions in Iceland, such as the seal beach, practically by ourselves. The weather had scared most tourists away.

Gas Station Hot Dogs Are Your Friend, and Other Food and Drink Hacks 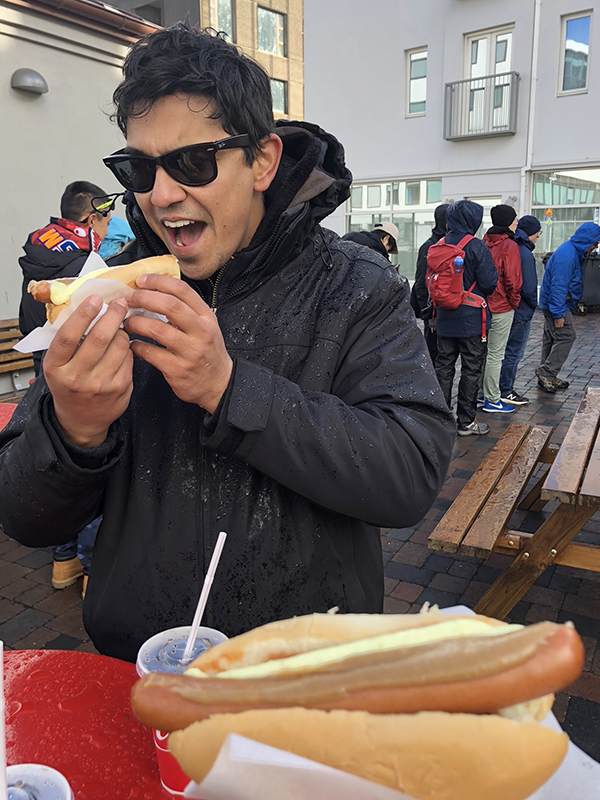 We need to talk about Icelandic hot dogs.

These savory, slightly sweet, culinary creations might as well be the national food of Iceland. Called a pylsur, they are made from organic lamb, beef and pork that you can literally see roaming the countryside when you explore Iceland.

The dogs sit atop two mounds of crispy raw onions. And in my opinion, they reach excellence when they are topped with ketchup, a sweet brown mustard (that almost has a peanut buttery taste) and a remoulade that smacks of mayonnaise and mustard. Say “ane meth alt” and you’ll get the works.

We probably ate a dozen hot dogs in Iceland because they are delicious and cost $3.50 at most N1 gas stations. Even at the world famous Bæjarins Beztu Pylsur. We saved more than $60 a day by forgoing a sit-down lunch every day for a hotdog.

As for drinking — don’t do it out and about. You’ll pay more than $15 for a beer or a shot of the traditional Icelandic schnapps Brennivín.

After you get off your plane at Kelfavik Airport, walk through the terminal and buy and devour your first Icelandic hotdog, you’ll end up in a massive duty-free shop. It’ll look like a supermarket sweep of people loading carts up with beer, wine and liquor.

Despite the long line, this is your best bet for buying booze if you plan to partake while in Iceland.

I do have a confession. It’s a vacation, so we splurged a bit and ate the $100 tasting menu at Fiskmarkaðurinn. And no, we didn’t eat puffin.

So, $2,300 is still a lot of money to save up for what ended up being a five-day vacation. But we learned a lot during the time and could shave hundreds off that.

Skip the Blue Lagoon. It may be the Instagram capital of Iceland and the magical place you’ll see in 99% of travel advertisements.

In reality, it felt like being at a waterpark in the U.S. Tons of people, overpriced drinks, and it’s next to a geothermal power plant. In fact, runoff from the plant is what you’re swimming in.

Head to a public swimming pool or a local geothermal river instead. Those are free!

Next time we go, I plan to lobby my wife to spend a couple days in a camper like this one. That way we can cheaply see large swaths of the country without worrying about a return trip to our hotel.

Remember the big bag we checked? If we had worn our jackets on the plane, we might have been able to either forgo it or use it to pack nonperishable goods for cheap eats in Iceland.

And finally, we wouldn’t have packed so much into single days. Plan one major natural wonder you want to see and spend a few hours taking it in.

Watch the waves crashing into the shining black lava pearls. Listen to the seals shout at each other while the wind howls. And really, truly experience the beauty of Iceland.

Also, if you plan to take a picture in front of the altar-like rock formation at Djúpalónssandur, ask the elves for permission. I didn’t, and I believe it’s the reason I lost my wedding ring in a geothermal river.

Alex Mahadevan is a data journalist at The Penny Hoarder. He briefly considered staying in Iceland to start a black metal band.