July 7, 2017
Sarah and Andrew Roehm's wedding venue was a ranch that featured oak trees, a farmhouse and cows. Photo courtesy of Marcoz & Miranda
Some of the links in this post are from our sponsors. We provide you with accurate, reliable information. Learn more about how we make money and select our advertising partners.

Certain things in life just belong together: peanut butter and jelly, coffee and cream, bread and butter, and Sarah and Andrew Roehm.

After being together for over six years, this is obvious to anyone who knows them. I’ve been friends with them for a few years and was excited to finally attend their wedding.

The ceremony was gorgeous: it was at a nature preserve in Florida, complete with large oak trees swaying in the breeze, cows grazing and mooing in a nearby pasture, a charming farmhouse and large picnic-style wooden tables adorned with handmade woodland decorations.

Attending a wedding you genuinely enjoy is one thing, but once I found out how little they paid, I was shocked.

They accomplished their dream wedding with a total of 130 people in attendance –  for less than $7,000.

And no, they didn’t sacrifice the booze.

Check out the breakdown of their costs, and how they saved thousands on their dream wedding.

They Crafted a Vision

The couple says taking the time to hone in and agree on a wedding day theme is the first step to lowering expenses. It keeps you from buying unnecessary items that probably won’t even be used.

“We like a lot of different things, and that’s where people can spend too much money because they don’t have a conclusive theme,” says Sarah.

They decided on an outdoor wedding with a rustic, woodland feel that was representative of their personalities.

A month after they became engaged, they started purchasing things for the wedding.

“We knew being 30 plus [years old], the majority of the cost was going to be on us,” Andrew says. “After our monthly expenses, we planned to invest X amount of our paychecks into wedding stuff.”

Staying focused on their theme helped the couple narrow down their choices, even on simple purchases like table decor. Before buying anything, they would always ask, “Is this representative of us, and does it fit our theme?”

Andrew credits this focus as their main decision-maker: the item either did or didn’t fit their theme. If it didn’t fit, they wouldn’t buy it. “No, Andrew, having a roulette table doesn’t fit our theme,” Sarah said at one point.

You don’t need to go all out on gifts for the bridal party. Plus, smaller gifts with some thought behind them can go a lot further than one large, expensive thing that might not feel as personal.

For her bridal party gifts, Sarah used Etsy to find customizable pieces at an affordable price: she purchased hand-stitched robes for $17 each. She also made necklaces with supplies she bought from Michael’s.

Instead of buying a large gift for each of his groomsmen, Andrew purchased small, personalized gifts from Amazon and Etsy. For example: a nice tie (on sale, of course), graphic socks “relevant to each guy’s interests,” monogrammed handkerchiefs and Alexander Hamilton’s “Guide to Life.”

They didn’t have a specific budget, but they knew alternative wedding rings would be more cost effective, as well as add a personal touch.

They only spent a total of $500 on wedding bands. Sarah’s ring is an antique Victorian-era opal from a local shop in downtown St. Petersburg for $200. Andrew’s titanium band cost around $300 and was purchased online from Stag Head Design.

Andrew stresses the importance of finding alternatives to the traditional metals and diamonds, saying, “For both rings combined, it was a fraction of the cost of a diamond wedding band.”

Make an Affordable Venue Work for You

The venue they chose was a ranch in Dade City, Florida, that cost $2,400. It was slightly off the beaten path but gorgeous nonetheless. Both the ceremony and reception were held at the ranch, which is completely outdoors.

Although this wasn’t their first choice, every other venue they came across was up to 10 times more expensive — the next cheapest venue they looked into was $18,000.

At first, Sarah and Andrew thought this venue might have been “too country” for the type of wedding they wanted. But instead of paying more for a different spot, they accepted the challenge and made the venue fit their vision.

Their choice made sense “because they come with so much: wedding planners, seats, set up, etc. This one was so inexpensive because the woman who owned the ranch didn’t do anything for us,” Sarah says.

Since they didn’t provide any kind of setup, Sarah and Andrew’s friends and family came early to place everything.

What was included with the venue? Seating, tables and chairs for the reception and linens.

They Focused on the Most Important Pieces

In order to avoid unnecessary costs, Sarah and Andrew considered what was most important to them and cut anything that didn’t make that list, like wedding favors. Anything they decided to spend money on, they did so frugally.

This doesn’t mean the wedding lacked entertainment — they had music, drinks, a fire pit with blankets, a hot chocolate bar and giant lawn-sized board games.

(Note: a fire pit and hot chocolate bar may seem out of place at an outdoor wedding in Florida, but it ended up being 44 degrees that January night.)

The flowers were purchased wholesale and all the decorations and bouquets were handmade, which led to a huge price drop. Sarah’s friends arranged the flowers and table decor based loosely off Pinterest photos.

Sarah said she and her friends went to thrift stores at least once a week to find candlesticks, tablecloths and anything else they needed a lot of.

Sarah used Pinterest as inspiration, but not as an end-all-be-all guide. “It’s important, even with pins, to make it feel like you and not artificial,” she says.

You could easily go crazy trying to make everything look like the photos on Pinterest, so try not to get caught up in that. Remember: nothing ever looks exactly like the photos.

They Reused Their Wedding Decor as Home Decor 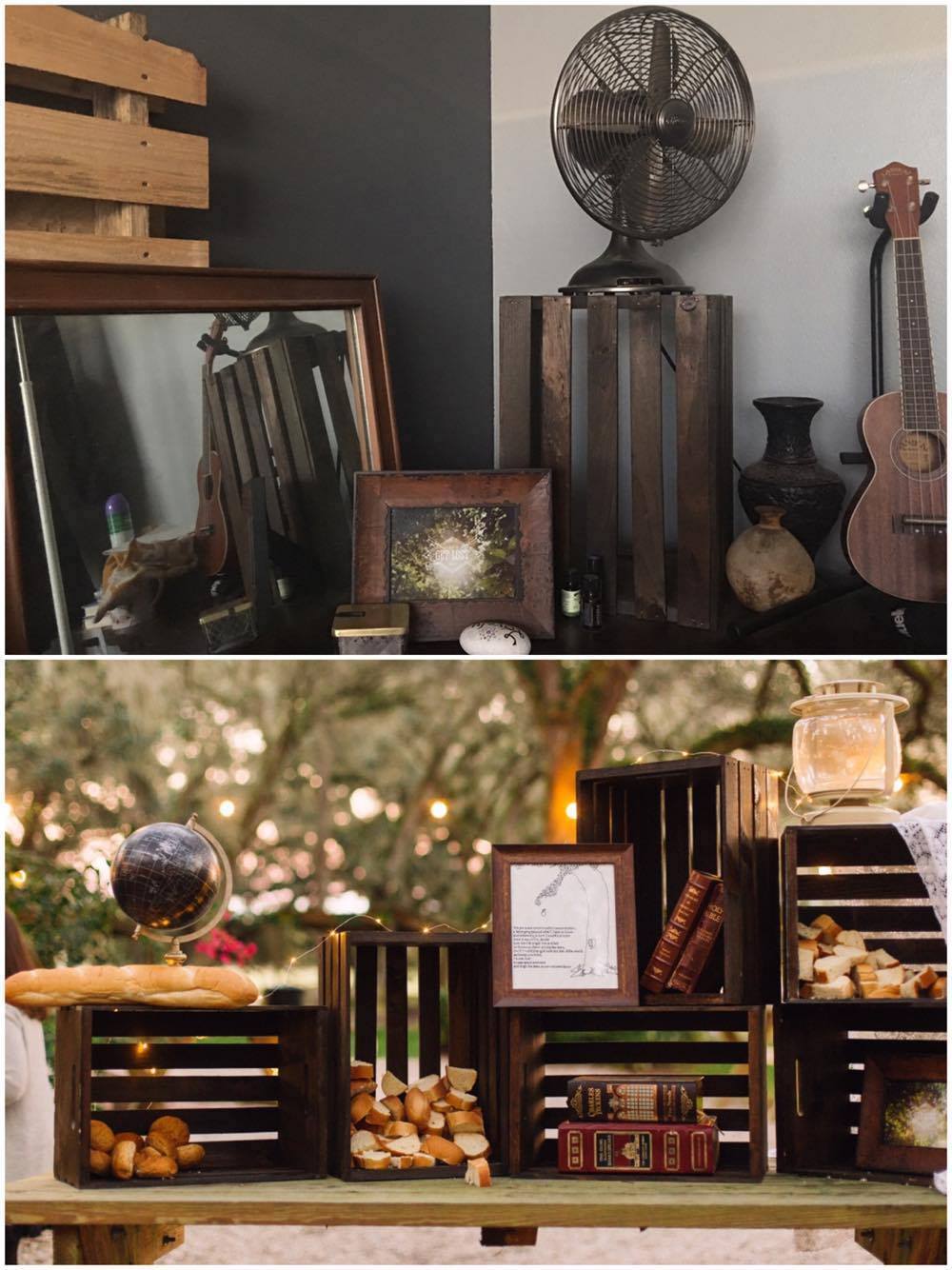 Photos courtesy of Sarah Roehm and Marcoz and Miranda

My personal favorite tip the newlyweds have to offer? Invest in decor you’ll use to decorate your house.

They didn’t mind spending money on items that would double as home decor “because it will make home feel like home after the fact.”

They’ve stuck to this — their new home is adorned with wedding decor and it’s uniquely them. If you’ve chosen a wedding theme that’s representative of your personal style, it should be easy to use to decorate your home.

Without a full kitchen at the venue, it would’ve been difficult to have a full-blown catering service even if they wanted to pay for it. Instead, they hired a burger food truck to come to the ranch.

“It was a neat touch that was obviously us,” Andrew says of their “catering.”

Having an open bar wasn’t important to them, but they didn’t want to completely sacrifice the alcohol.

They wanted champagne and wine so people could toast, as well as a few beer options. Instead of having an open bar, they featured two signature drinks: the groom’s choice of Moscow mules and the bride’s choice of cotton candy champagne cocktails.

They purchased all of the alcohol from Sam’s Club for around $500, and the venue included a bartender in its price. For comparison, the average price for an open bar service ranges from about $1,800 to $3,000 according to Value Penguin’s 2017 Survey.

They Asked for Help

Sarah says an important thing to remember when planning your wedding is not being afraid to ask for help. “If any of my friends had asked me to help out with things during their wedding, I wouldn’t have minded doing it,” she says.

Andrew credits the willingness of their talented friends to help out as the biggest thing that helped them cut costs.

Here are a few ways their friends pitched in:

They Were Honest About Their Budget

Almost every wedding photographer Sarah found quoted her $3,000, which was way over their budget. Finally, she found photographers willing to work with her after being honest and mentioning she couldn’t afford the advertised prices.

With a budget of $1,400, Sarah got two photographers for the entire wedding day plus an engagement shoot.

While this method worked for Sarah, we recommend setting a budget for photography ahead of time and asking prospective photographers what they can offer for your budget.

Just remember photographers need to make a living, too. While your budget is important, make sure it’s still realistic. Don’t expect a full professional photography package for a few hundred bucks and free drinks.

For videographers, Sarah recommends looking for film students at local colleges who would be willing to record your wedding for their portfolio. After posting they were in need of a wedding videographer on Facebook, they ended up with a local film student who only charged them $125.

There seems to be a great debate between buying versus renting wedding clothes.

However, Andrew’s position holds strong: buy it. It’s cheaper than renting, and you’re spending money on something you’ll actually own and can wear again instead of paying to wear it for one night.

But remember, patience is key. He waited for the perfect sale to get the most for his money.

Andrew knows Men’s Warehouse holds quarterly sales. Everything the groom and groomsmen wore was 50% off. What was going to be $300 per person ended up being $150, plus an extra 10% off for buying all five at once.

Sarah’s bridesmaids purchased their dresses from a variety of different places. Some got their dresses on sale from David’s Bridal, one bought her dress from eBay for $80 and another purchased an outfit from H&M.

The bridesmaids each got something of their own, and they didn’t even need to buy the same color dress.

A Major Splurge: The Dress

Sarah’s dress was a sizable portion of their budget. She spent around $1,100 on both her dress and jacket.

If they really needed to, they could have cut wedding dress costs by shopping used or waiting for a good sample sale.

But when you find the right wedding dress, you just know. Sarah found her dress on an unplanned excursion to visit her mom in Tennessee. They went on a spontaneous dress browsing trip, and ended up leaving with one.

Luckily, Sarah was able to save on shoes because she didn’t wear any. Bonus for having a woodland themed wedding? No uncomfortable (and expensive) heels.

Careful planning and patience allowed Sarah and Andrew to have their dream wedding at a price they could actually afford.

“We literally had our hands in every single choice and nothing felt out of place,” says Andrew of the wedding decor. Instead of hiring a wedding planner, Sarah and Andrew did everything themselves. Andrew describes this situation as a toss up between “man hours versus dollars” — he obviously chose to put in the “man hours”.

“The thing that really saved our budget was how much we were willing to do. You can spend a lot of money on a wedding if you want to be catered to and not get your own hands dirty.”

Although planning played a huge role in making their wedding a reality, Andrew says it’s important to keep a good perspective about the day.

“The only thing that needs to go exactly as planned is that we’re still married to each other at the end of the day.”

Jacquelyn Pica is an editorial intern at The Penny Hoarder.