Most Cities Haven’t Seen Wages Grow Since 2009. Here Are 10 That Have

It’s been nearly a decade since the official end of the Great Recession, but if you’re still struggling to stretch that paycheck through the next week, you’re not alone.

We’ve seen the unemployment rate hit near record lows and job openings continue to climb to historic highs. But multiple Penny Hoarder analyses show that in half to nearly 75% of the largest U.S. cities, people are making less per hour than they did in 2009.

Using the U.S. Bureau of Labor Statistics Occupational Employment Statistics database, we tracked changes in median and average hourly pay for more than 300 metropolitan areas through 2017, when the latest annual numbers were available. We factored in inflation to find out how much your paycheck has really grown since the Great Recession “ended.”

Wages just don’t seem to be keeping up with the economy. 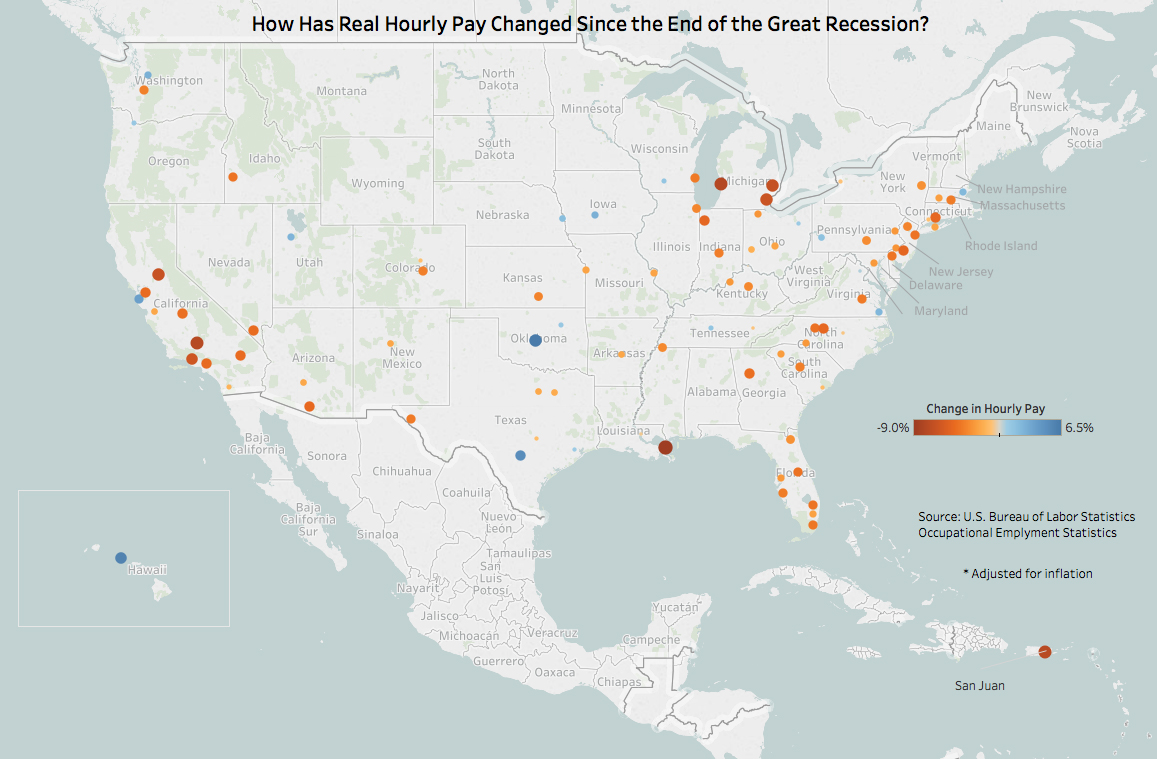 When you look at the change in median hourly pay since 2009, you’ll find that 77 of the largest 100 cities actually saw a decrease in wages. For average hourly pay, which can be swayed by outliers like a CEO making hundreds of dollars an hour, there are still 51 cities that saw a decline in real wage.

The numbers are also pretty depressing when you consider annual salary. Forty-three cities saw a drop in inflation-adjusted median yearly pay between 2009 and last year, and 50 cities lost pay if you look at the overall averages.

For the U.S. as a whole, you do see a modest growth in wages, says Elise Gould, senior economist at the Economic Policy Institute. But when you consider the rising cost of necessities like childcare, workers are not seeing paychecks stretch as far as they had in the past.

“There’s all sorts of ways workers have become more productive, but they’re not seeing that in their paychecks,” she says.

Slow or stagnant pay growth is partly due to rising inequality, Gould explains. The economy is growing, but most of the wage gains are going to a small sliver of the upper-income earners. And a long-term decline in labor union participation isn’t helping, either.

But there are cities bucking the trend. In Oklahoma City, for example, hourly wages have grown more than 6% since 2009. And Des Moines, Iowa, saw paychecks jump 3% since the recession.

If you live in one of the cities with big paycheck losses, like New Orleans, Sacramento or Detroit, there are tons of ways to save money.

Or, you could consider hitting the road and moving to of the cities that have recovered mightily from the Great Recession.

These 10 Cities Are Seeing Major Economic Recovery in Workers’ Paychecks

Twenty-five years ago, while the rest of the country was in a recession, oil prices tanked and more than a hundred banks closed, forcing Oklahoma City into more of a “depression.”

That’s according to Oklahoma City Chamber of Commerce CEO Roy Williams, who put it bluntly: “Every industry sector was in the toilet.”

A monolithic economy, and the immediate failure to land major relocations from big companies with tax incentives, forced the city to rethink its entire character. After a quarter of a decade and more than $4 billion in projects funded through voter referenda, Oklahoma City sits atop our list of the cities where paychecks have recovered the fastest since the Great Recession.

The city’s hourly pay has grown 6.5% since the middle of 2009. The aerospace and aviation industry and the burgeoning bioscience sector are driving the growth by bringing high-paying jobs to the area. In the last nine years, for example, Boeing has relocated 2,500 engineers from around the country.

The key, Williams explains, was making Oklahoma City a desirable place to live — that brings the companies, which in turn bring high-paying jobs.

Since the early 1990s, Oklahoma City has transformed a former warehouse district into a vibrant waterfront entertainment area called the Bricktown Canal and has spent more than $700 million to renovate or redevelop schools. It has also spent millions more on transit improvements, libraries, and of course, luring the NBA’s Oklahoma City Thunder. The payoff: a diverse economy that has spurred the country’s fastest paycheck growth since the Great Recession.

While paychecks in most big U.S. cities haven’t recovered from the Great Recession, there are some pockets of the country that are making it rain like Oklahoma City (in the metaphorical and literal sense, given that summer storms are already rolling in.)

Note: Some cities on this list have faster job growth, but we ranked them solely on hourly pay growth. And we’re not saying every place on this list is perfect (San Francisco and Honolulu are quite expensive and both have high rates of homelessness). The data is all from 2017.

Here are 10 cities where paychecks have grown the most since 2009: