Paper Money Value by Serial Numbers: What Are Your Dollars Worth?

Pull any bill out of your wallet. See the dark green numbers on the top-left and top-right corners? They could mean your bill is worth much more than its face value.

If a serial number’s digits are unique or interesting, collectors might be willing to pay big bucks — hundreds or even thousands of dollars — for your bill. You’ll make the most profit off a $1 bill with a fancy serial number, since its face value is lower than, say, a $20 bill, but it’s worth scrutinizing all your cash. Who knows what your $100 bill could actually be worth?

Knowing what your paper money might be worth is all in the serial number. 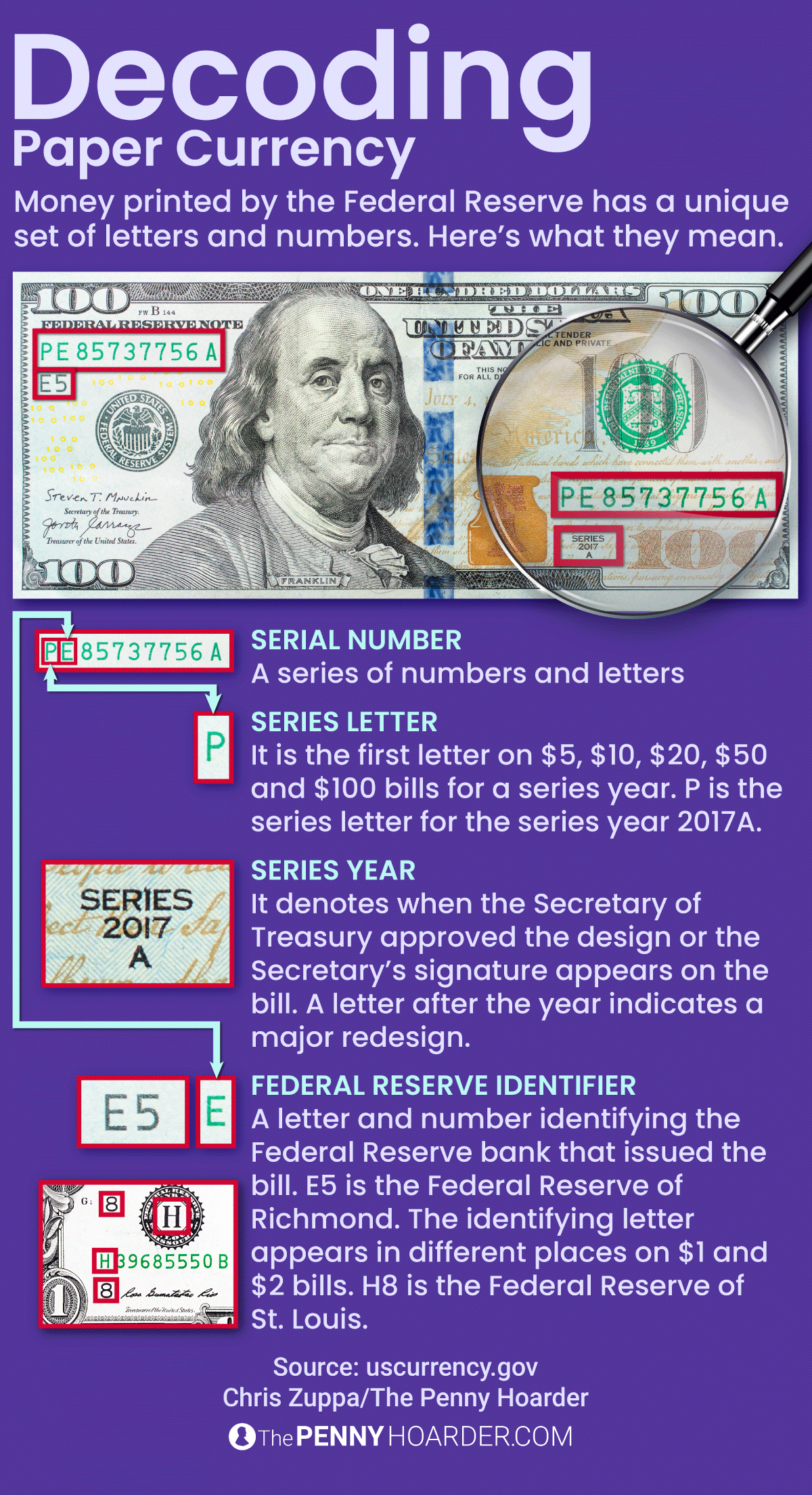 What Are Serial Numbers?

Serial numbers are eight-digit-long codes that are unique to each bill. They are accompanied by other identifying letters and numbers that tell us which series year the bill is from and where it was printed. They are found on the front of U.S. currency and are always printed twice.

On bills worth $5 and up, each serial number begins with a letter, which tells us the series year of the bill. The years are represented by letters A-P as follows:

The series year is also printed separately on the currency, in between the portrait of the historical figure (such as Lincoln on the $5 bill) and the Secretary of the Treasury’s signature in the bottom right part of the bill. You can check on a bill you have at home to see how these match up.

On dollar bills (and $2 bills), the series year only appears in the bottom right quadrant.

Hey, not every dollar bill is going to be a winner. Looking for other ways to make easy money? Here are 12 ways to make money — without a real job.

On $5 bills and up, the bank identifier appears separately from the serial number, though the letter also appears next to the series year letter before the actual serial number.

On $1 and $2 bills, the letter preceding the serial number will match the bank where the bill was printed (such as K for Dallas) and the number portion of this identifier appears separately on the currency.

There are several different categories of paper currency in the U.S., and some are more collectable than others.

Confederate Issues are bills issued during the Civil War (1861-1865). They are typically not sought by collectors.

Federal Reserve Notes are bills issued between 1914 and the present in denominations ranging from $1 to $10,000. The worth of a modern bill depends on its serial number and how unusual it is. Collectors look for several different types of fancy serial numbers that stand out from the crowd.

Want to see if your paper currency is worth way more than $1 or $5? Here’s what to look for.

People also enjoy collecting currency with high numbers, and these can be even more valuable than lower numbers since there are fewer in circulation. Bills marked with 99999900 and higher are especially prized.

A flipper is a note whose number can be read right side up or upside down. Such as, 0069000. On eBay, flippers cost a few bucks up to several hundred dollars.

Some bills have a star instead of a letter at the end of their serial number. Known as star notes, these bills are replacements issued when the original bill had a printing error. Because it’s against policy to produce a dollar’s serial number more than once, the mint simply adds a star to the end.

These printing errors aren’t common, so there aren’t many star notes in circulation. You’ll see $1 star notes on eBay for $5 and up.

A two-digit repeating number, like 45454545, is called a super repeater and is even more valuable. Some eBay listings start at a few hundred dollars.

6. Solids and Near Solids

Only about one out of every 11 million notes is a solid, and they can be worth $500 or more.

Since these notes are so rare, people also collect near-solids, where only one digit differs, like 55555575. These will usually bring in less money than a solid, but you’re more likely to find one.

Binary bills have serial numbers with only two numbers, such as 29299299. A near solid would count as one of these binary notes, since it only includes two numbers. On eBay, some binary notes can go for more than $800.

Because of the rarity of binary bills, some collectors even ask for trinary notes, which contain three unique digits in various combinations (e.g. 29329939).

Some collectors want notes with a specific year or date in the serial number, perhaps a famous date or one meaningful to them. For example, 02162006 might be valuable to a collector whose child was born Feb. 16, 2006.

A radar serial number reads the same backwards and forwards, like a palindrome. For example, 06288260. A good condition, uncirculated $1 radar could sell for about $25.

If only the end two digits are different (like 27777772), you’ve got a super radar, which is much more rare and valuable. Even a $1 bill with this type of serial number can sell for $70 and up on eBay.

When you have two or more separate notes with consecutive serial numbers, like 25348793 and 25348794, you have one of these series. They’re not uncommon, since you can get consecutive bills at any bank, but can be valuable if they also fit into another category on this list.

While technically they’re a version of a quad double, notes whose serial numbers consist of two sets of four of the same number are called double quads. (Confusing, isn’t it?)

For example, 77776666 is a double quad. These bills are rarer and more valuable.

When the serial number has the same two or three digits on both ends, it’s called a bookend. Three-number bookends, like 36584365, are more valuable than two-digit bookends, like 36829736. Prices start around $8 for a $1 bookend on eBay.

How to Look Up Serial Numbers

If you think you might have possession of a bill that’s worth more than its face value, you can go online to look up the serial number.

To test it out, I looked up the number on a $5 bill I had in my wallet at MyCurrencyCollection.com. Once you type in the bill’s eight-digit number, it’ll assign it a percentage on the “Coolness Index.” This index is created by CoolNumbers.com using a formula that evaluates numbers according to its “interesting properties.”

Our $5 bill was 89.9% cool, or “almost cool,” according to the website. Here are some facts we found out about the note that made it almost (but not quite) cool:

Unfortunately, “almost cool” is not enough to push the value of the $5 up, so we won’t be making any extra money on this one. And sadly, the dollar bill was ranked as solidly “uncool” with just 18.5% on the Coolness Index.

However, checking online to see if your money is cool (or uncool) doesn’t guarantee that you’ll be able to sell it for more than face value. While you can list your paper money for as much or as little as you want, it’s worth depends on what people are willing to pay for it.

Where to Sell Your Paper Money

If you do find yourself the owner of a unique bank note, there are several places you can cash it in.

The easiest option is to list your note on eBay. Do a search to see what similar notes are listed for, and list yours in the same ballpark. You don’t want to list too low and wonder if you could have made more; nor do you want to list it too high and risk it not selling at all.

If you don’t want to deal with eBay, you can search locally to see if there are any paper money dealers in your area. If there are, you can take your bank notes to them for an appraisal and they will either offer to purchase the note from you or direct you to someone who may be interested.

Still have questions about your paper money and what it might be worth? These frequently asked questions should help.

Which Dollar Bill Serial Numbers Are Worth Money?

Generally, the more unique the serial number on your dollar bill, the more likely it is to be worth more than face value. Some examples of uniqueness include repeating numbers, numbers with a star after them and sequences (such as 12345678). You can see a full list of potentially valuable serial number types in the “15 Types of Valuable Serial Numbers” section above.

How Do I Know if My Dollar Bill Is Worth Money?

To know whether your dollar bill could be worth more than just $1, you need to examine the serial number. This is an eight-digit number that is printed twice on all paper money, and it has one or two letters as a prefix, depending on the denomination. If the number is unique or has a star after it, it could be valuable. See “15 Types of Valuable Serial Numbers” and “How to Look Up Serial Numbers” above.

How Do You Check Serial Numbers on Money?

You can check your serial numbers online to get an idea of whether they might be worth more than face value. See the “How to Look Up Serial Numbers” section above.

What Is the Value of Paper Money?

Paper money is usually worth the exact amount listed on the face (for example, $1, $5 or $10). However, some bills have unique serial numbers that make them desirable to collectors, and therefore sell for more than their face value. See “15 Types of Valuable Serial Numbers” to learn more about the types of unique numbers that are valuable to collectors.