Maggot Farming: This Guy Raises and Sells Insects
see more from Side Gigs

This Guy Has 100,000 Maggots in His Backyard. And It’s Making Him Money

What would you do if your husband told you he was going to start breeding maggots?

Probably be grossed out, right? Or at least skeptical?

Paul Rabaut’s wife sure was.

But now she’s totally on board with his hobby — because she’s realized A) It’s really not gross or dirty, B) It’s good for the environment and C) It earns them some extra money.

Seriously? He earns money with MAGGOTS? As soon as I heard that, I had to learn more.

So, along with our video producer and photographer, I drove out to the suburbs of Central Florida, where Rabaut lives with his wife… and 100,000 maggots.

Keep reading to learn their unique story — and how you could start a maggot farm that brings in an extra $100 per week.

Though Rabaut now earns a small side income with maggots, that wasn’t what motivated him to start breeding them.

As a biology professor, his main goal was to reduce food waste.

In his verdant ecosystem of a backyard — filled with chickens, tilapia-farming tanks and more than 50 edible plants — he explained his outlook.

“With our current model (in the U.S.), we take all this waste, and we throw it into a landfill,” he explained. “It just sits there and rots and creates methane gas. It’s highly toxic to the environment.”

Maggots, however, change all that.

“These guys take all those food scraps and turn them back into food for other plants or animals,” Rabaut said.

He told me that’s also why his compost bin doesn’t smell.

“They eat it so fast that it doesn’t really have a chance to rot,” he explained. “They also mix it, which adds oxygen, so it doesn’t break down aromatically.”

And, before you get grossed out, know this: When maggots turn into flies (called soldier flies), they don’t spread disease.

“A normal house fly lands on some poop, eats some of that poop, then lands on your sandwich,” Rabaut explained. “By doing that, they transfer things like E. coli and salmonella. But since soldier flies don’t have a mouth, they don’t do anything to you.”

Even better, they actually reduce the numbers of disease-ridden flies in your backyard.

“These guys eat so much stuff so quickly, they outcompete all the other bad flies,” Rabaut said. “Their pheromones also ward off other flies, so they act like a giant fly repellent.”

Who on Earth Would Pay for Maggots?

Fine, so maggots are a lot cooler and cleaner than I initially thought.

But still, who would PAY for them?

Lizards. Or, more specifically, their owners.

Because maggots are chock full of protein and calories and pretty much the filet mignon of lizard food.

Charging $10 for a container of 200 maggots, Rabaut has no problem finding customers among owners of ornamental lizards, like geckos, chameleons and bearded dragons.

Want to Become a Maggot Farmer?

I don’t know about you, but becoming a maggot farmer is sounding more and more appealing — especially because it’s easy to do on the side of a full-time job.

If you’re interested, it’s imperative to first understand the life cycle of a maggot/soldier fly.

Note the pupae stage is when you’ll sell the maggots, as this is when they’re most calorie-dense.

Got all that? Time to don your farming cap!

Here’s how to start your maggot-breeding biz:

What the heck is a maggot bin? I’m so glad you asked!

Here’s a photo of Rabaut’s maggot bin, which cost him about $100 in supplies. 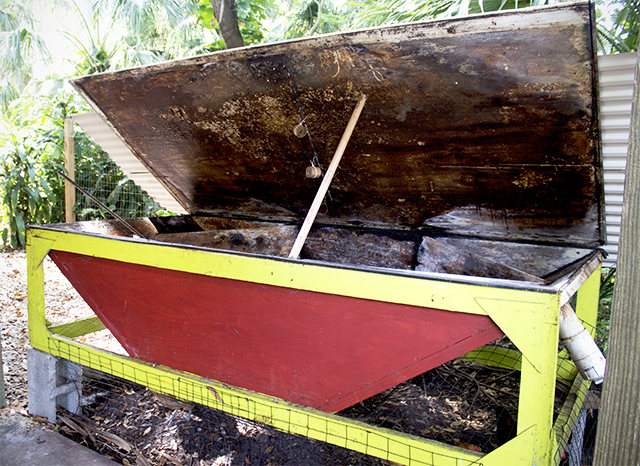 When maggots are ready to pupate, they seek dryer surfaces (ie: not the pile of food waste); the sloping sides facilitate their climb.

“These angled sides kind of push them into these holes,” Rabaut explained.

“When they want to form into a cocoon, they walk up the plank and fall into those cups — and then I collect them. That way, I never have to fish for them in the bin.”

2. Fill it With Food Scraps 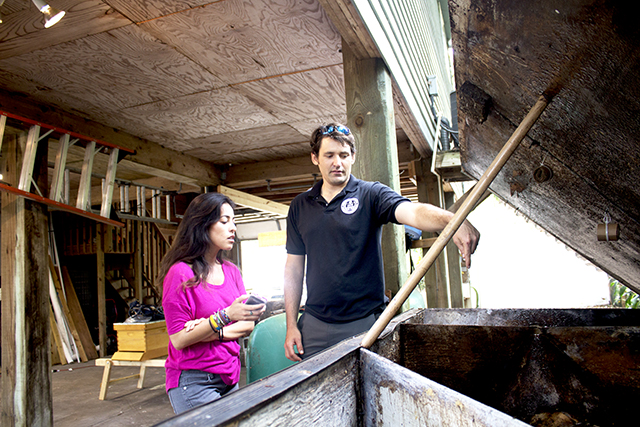 Now, where does one find maggots? Is there a maggot catalog you can order from?

Nope, for better or worse, maggots are free.

Fill the bin with food scraps, and “they’ll find you,” Rabaut said.

You may have “Flymageddon” for a while. But as explained earlier, the maggots will soon take over. 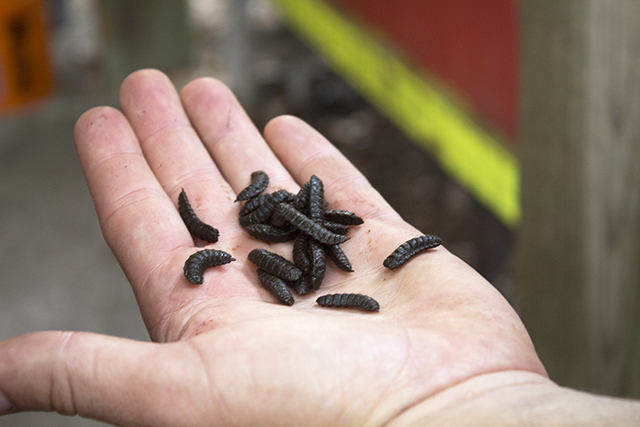 If you’ve built your bin like Rabaut, it’ll be a cinch to collect your money-makin’ maggots.

You can then put them into a plastic container and cover them with wood chips. As long as they’re not exposed to light, they won’t turn into flies — and you can keep them in your house until you’re ready to sell them.

Bonus? “They don’t eat, so you don’t have to provide them with any food or water,” Rabaut said. 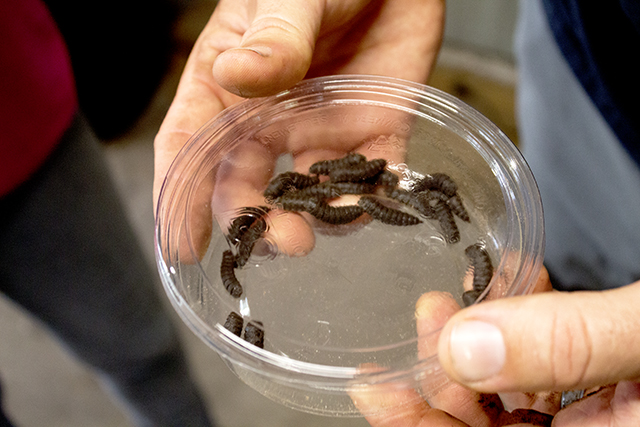 So far, Rabaut has only used Craigslist to sell his maggots.

“Every time I put up an ad, I get a bunch of hits,” he said. But, he warned this process is “very effort-intensive.”

He’s stuck with it because he doesn’t sell his maggots very frequently, choosing instead to feed them to his chickens and tilapia.

If you want to scale your business, he recommended finding regular customers — like lizard breeders or pet stores.

You’d probably also want to create a relationship with a local source of food scraps, since the amount you and your family create is probably not enough to feed 100,000 maggots.

You could ask local restaurants or businesses. Rabaut, for example, takes food waste from the college he works at.

Though his maggots could eat about 80 pounds of food waste per day, “they’ll survive on whatever I give them.”

On average, he feeds them about 100 pounds of scraps per week.

How Much Money Can You Earn With Maggots?

With that amount of food, Rabaut harvests around 10 pounds of maggot pupae per week.

For not a lot of work, either. If you lined up a regular customer and source of food waste, Rabaut said the ongoing maintenance required would be “super little.”