How to Get Fired on Your First Day at a New Job: 9 Hilarious, Dangerous or Just Plain Stupid Things People ACTUALLY Did

I couldn’t imagine getting fired on the first day at a new job. Who can screw up that badly?

But apparently, it happens.

About a month ago, a Reddit user posed this question in AskReddit: “People who got fired on the first day of the job, what happened?”

Some of the thousands of responses are educational, some good warnings about what to watch out for in a company… and some are just plain hilarious.

We combed through and found our favorite stories — take note!

(Some quotes have been edited for clarity, grammar and punctuation.)

The most striking story came up again and again: The new employees were fired for not showing up on their first day.

Why would anyone do that?

Most say they were never informed they’d been hired.

“They called me and told me I was let go for not showing up on my first day. Which was a surprise for me, since at no point after the interview had I been told that I’d been hired.” – deftss

“It was really weird when I [finally] showed up and everyone was [skeptical], like, ‘Hey, why didn’t you show up last week…’” – Emsjunki3

Somehow, it’s possible to be hired for a job — and be completely unqualified.

Maybe someone didn’t check your resume closely enough, or maybe you’re just good at lying your way through interviews.

Either way, the truth usually comes out when you’re faced with real work.

“I had NO clue what I was doing and had a mini-meltdown talking to my supervisor. She asked me how I could possibly not know what I was doing when I had clearly passed the test to get the job. My response was ‘Test???? WHAT TEST????’” – JobaccaWookiee

User Ladnil witnessed a co-worker fired on Day One:

“When the end of his shift comes, his drawer is short $20, and the manager starts [explaining] how to handle money correctly. His response [was], ‘Oh I didn’t think you were going to count that.’”

3. Do the Wrong Work While You’re on the Clock

Even when you think — or know — you can do something better than how you were trained, you could get in trouble for your so-called initiative.

User hi_from_brian was working in data entry through a temp agency early in a “tech” career. When the user discovered the work they were doing could be done much more efficiently with a simple script, the user set out to create the script.

hi_from_brian spent their first four hours of Day One creating a script that would likely cut a five-day job to less than two.

“The lady in charge of watching me asked me right after lunch on that first day how many records I had completed so far,” they explained, “and I answered her honestly. I had done four records (the ones I had tested my script against), but was going to blast through hundreds before that business day was done…”

But shortly after returning to work “a security type showed up, and escorted me out while muttering something about non-performance.”

In some cases, the problems don’t end with the job. Maybe you’re just not, er, a people person.

“I got into a fist fight with the owner’s son. In my defense, he started it.” – mankiller27

User oograh found himself working alongside a new hire he knew from high school. Late in the day, the co-worker was fired.

“Come to find out,” oograh explains, “[he] thought it would be cool to brag to my supervisor that he used to [beat me up] in high school all the time,” which didn’t actually happen!

“They were protecting me from my high school bully that I didn’t even know existed.”

“A guy showed up on his first day, went through orientation, then out for beers with his boss and a few others. His boss was talking about his 16-year-old girl and the new guy said ‘Is she hot?’” – stratospaly

“I was a hostess at Applebee’s for a day once. I was busing a table and dropped a cup and whispered ‘shit’” in front of customers. – Intergalactic_Feta

Whether it’s an unfortunate false positive or bad timing on your part, a failed drug test is automatic grounds for dismissal in many jobs.

“Just started a new job and a guy on my training group on the first day started offering people LSD. He didn’t have a second day.” – RedBullRyan

If you’re certain the test results are wrong, it’s worth following up, as user cyrilspaceman explains:

“I followed up with the company that did the drug tests and found out that they hadn’t done the test yet. (My company asked for a list of everyone that passed and my name wasn’t on it)…”

“I failed my military entrance drug testing the first time due to a couple poppyseed muffins and a gallon of ice cream. No regrets; they were delicious.” – Militant_Monk 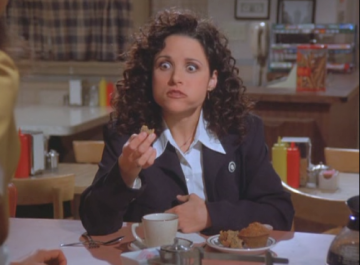 “I used to work in the kitchen at a burrito place, and we hired a new dish guy who got fired on day one for coming in on acid. He said he thought his trip should have been over by the time his shift started.” – lectrikyle

“A kid where I used to work was chosen the day he started for a random drug test (They did these once every few months.) He said, “No problem,” clocked out and never returned.” – autumanempire

6. Do Something Really Dangerous (and Stupid)

“My friend’s grandfather got fired the first day as a NYC Subway conductor…opened the doors on the wrong side.” – troublesmoker

“I work in an oil field. New guy comes in on night shift. I tell him to go check the giant oil tank to see how full it is …  He looks down inside it, and uses HIS LIGHTER to get light.” – SirChoGath

User blank_mind saw someone else fired on their first day:

“I got a job working in a grocery warehouse, driving a forklift in the freezer section. This freezer was kept at least -20°F. …  Day one …  we see a group emerge from the freezer, one guy in the middle clutching his mouth, tears in his eyes.

“Y’know when kids dare each other to stick their tongues onto poles during winter? This guy did that of his own volition, in this incredibly cold room and had to wait until someone stumbled upon him for rescue. He was fired on the spot.”

“Lost balance of the serving tray and spilled hot soup all over the owner. It didn’t help that it was a Greek restaurant and I screamed ‘opa!’” – malgoya

8. Just Do Everything Wrong at Once

User moby323’s post is worth sharing almost in its entirety, it’s so laden with laughable on-the-job offenses. Please take note!

Here’s what they witnessed one young woman do on her first day working in a deli (edited for length):

After enduring a “rigorous hiring process,” they joined a group of new hires for training for an “entry level MIS position”. After the first 12-hour day, one new hire sent an email to the group:

“Y’all motherf***ers are crazy and this place will kill you all in a month, I’m out.”

Your Turn: Have you or anyone you know been fired on the first day of a new job? What happened?