Thomas Frank’s “blogging adventure” started after he was rejected as a writer for another blog.

Since he’d already written a post, then-19-year-old Frank decided to start his own blog and go from there.

If you’re a college student, you’re probably wondering about his secret. How did he pay off all his student debt before leaving campus?

A part-time job, an internship, a scholarship and a bit of freelancing helped Frank finished college debt-free. But much of his income came from his website.

Here’s how he started his blog and built it into a business — and how you can learn from his success.

Frank’s site, College Info Geek, focuses on getting the most out of college. From tips on paying off student loans to studying to getting the job you want, he helps readers “be awesome at college.”

At first, it was mostly for fun, sharing his own experience. After a couple of years, though, Frank started making money.

His first earnings were from Amazon affiliate links, where he would post a link to a product page and if someone bought it, he would get a small percentage of the sale. He didn’t make much at first, but as he built up traffic to his site, he started seeing bigger earnings.

He started by being active on social media, commenting and liking people’s work, trying to get his name out there.

Then one day he came up with the “really weird dumb idea” to build a hanging desk under his loft bed to save floor space. He took pictures of the entire process and share them on his blog.

It went viral. Two other blogs, including the one that had originally rejected him, wrote about his DIY project, and sent him a ton of traffic. Frank noticed a continued increase in his readership, and he began writing more frequently.

For the most part, Frank earns money through affiliate links. When someone makes a purchase through one of his links, he gets a portion of the sale. You have to get a lot of traffic to your website to earn money this way; Frank sees about 300,000 pageviews each month.

Though a lot of companies want to advertise on his blog, Frank focuses on featuring products and companies that benefit students. He said he tends to be pretty selective and usually seeks out companies he’s had previous experience with, such as Chegg, a textbook rental company.

When Frank wanted to build his readership even further, he knew he had to branch out. In 2013, he started a podcast to share his advice in a different format, and he releases new episodes every Monday.

Then, in 2014, Frank starting posting videos on a YouTube channel. He had wanted to do videos for a while, but was too intimidated by other bloggers with fancy equipment. After seeing a video by someone else who didn’t have any special gear, he thought to himself, “Why can’t I do this?”

Plus, he self-published an ebook about smart study habits, which he gives away to people who sign up for his email list.

Between his book, videos and podcasts, Frank describes it as “basically flipping a switch.” Two years ago, he was getting about seven to 10 new email subscribers a day. Today, he sees about 130 signups each day.

Frank also now speaks to groups and at conferences, some as a volunteer and a few paid gigs. His next plan is to write a book and publish it traditionally. 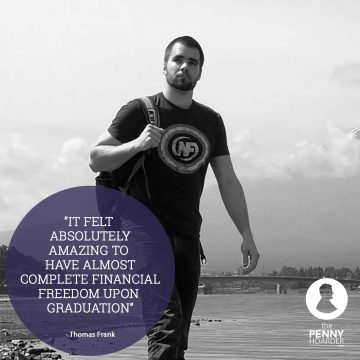 How He Paid Off His Student Loans

First, Frank made sure his monthly expenses were as low as possible.

Then, he set aside enough money to cover those costs, and put the rest of his income each money — from the blog, his part-time job and a college scholarship — straight toward his loans.

Frank’s loans were all federal Stafford loans, with about half subsidized and half unsubsidized, with an interest rate around 3.8%. He focused on paying off the unsubsidized ones first to reduce how much he’d spend in interest.

In March 2013, two months before graduation, he made his final payment.

“It felt absolutely amazing to have almost complete freedom upon graduation,” Frank said. “With my debt gone, I knew that all I needed to cover were my living expenses.”

What’s Next for Frank?

At first, Frank simply thought it’d be fun to start a blog in college.

Now, he’s paid off his student loans and his blog is his full-time job. He can work from anywhere, and he doesn’t have any debt hanging over his head.

We asked him how he feels about debt, two-plus years after making that last payment and becoming debt-free.

“After paying [off my loans], I had a pretty staunch debt-free mindset for a while,” he said. “Now, though, my view is a bit more nuanced.”

“I realized that taking on some debt enabled me to go to college. While I could have worked for a few years and then probably gone without taking loans, the debt didn’t end up being a burden, and college opened up a lot of opportunities.”

For example, it gave him the experience he shares on his website, which has become a lucrative business.

If you want to start and monetize a blog, check out our step-by-step guide.

Keen to make money from a podcast? We’ve got a post about that, too.

And for ideas on paying off your student loans quickly, check out these two posts. Good luck!