How to Make Money Playing in Scrabble Tournaments

I fancy myself a bit of a Words with Friends junkie.

It’s terribly unproductive, but there’s nothing quite like the thrill of being able to unload your otherwise useless knowledge of small words on a Triple Word Score. (Fellow nerds: Don’t pretend like you don’t know what I’m talking about…)

For those of you who have managed to escape the addiction, Words with Friends is the smartphone version of Scrabble and it allows you to literally have dozens of games going at once with your friends all over the world.

Anyhow, I’ve previously written about my embarrassing hobby of attending Monopoly tournaments as a teenager, but it turns out that Scrabble tournaments are even more popular (and maybe slightly less embarrassing…lol).

If you’ve got a knack for the game, we’ve got a few tips on how to make some extra money playing the game professionally…

Hundreds of local Scrabble tournaments are held over the world each year and most of them award prize money to the winner.

One of the best resources for finding tournament information is the North America Scrabble Players Association’s website (link). They’ve got a calendar of upcoming events along with entry fee and prize details for each tournament.

However, most tournaments require that you first register as a member of the NASPA before you can play. It costs $30 a year (although, new tournament players can request a 6-month trial membership for $15).

The NASPA also recommends that you join a local Scrabble club for practice play (link to full list).

The 2012 National Scrabble tournament is being held in Orlando, Florida this year. If it’s anything like last year, more than 350 competitors will show up in August to fight for the crown and the cash. 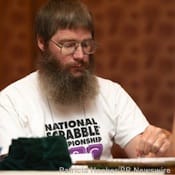 I must foreworn you though – if you decide to compete, you’ll be up against this guy (left). That’s Nigel Richards, the defending champion and 3-time winner of the National U.S. Scrabble Championship. Some of his winning words last year included “ALEVIN”, “TZIGANE” and “JAUP.” Good luck. 😉

If you think you’ve got what it takes to play with the big leagues, there are a few hoops you’ll have to jump through first:

– In order to be eligible for the National Tournament, you will need to first participate in a local, sanctioned Scrabble tournament. That will establish your player rating and ensure you’re placed in the right division at Nationals.

– Be prepared to cough up a steep entry fee. Entry fees start at $50 for minors and go up to $175 for Division I players.

– You’ll need to book a hotel. Last year’s tournament went on for 4 days and the winner played 31 games before knocking out his last opponent.

Why the tournament might be tough, it’s definitely worth it to the winner. First place takes home ten thousand greenbacks.

The Penny Hoarder Favorites
23 Hours Ago If You Have More Than $1,000 in Your Checking Account, Make These 6 Moves
by The Penny Hoarder
January 24, 2023 How to Make an Extra $1,300 This Year — Without a Job
by Quinten Plummer
January 25, 2023 The 6 Biggest Money Secrets Most Rich People Won’t Tell You
by The Penny Hoarder
January 25, 2023 This 6-Day Savings Challenge Is Going Viral By Making People Richer
by The Penny Hoarder
Trending
8 Hours Ago Here’s How Blood Donors Can Score Free Gift Cards and Other Perks
by Katherine Snow Smith
10 Hours Ago February Class Action Settlements Involve the Tampa Bay Buccaneers, American Airlines, Avis
by Top Class Actions
24 Hours Ago Chipotle Hiring Alert: 15,000 New Employees Needed Ahead of Burrito Season
by Robert Bruce
January 30, 2023 Get Paid to Write — Top 17 Sites Plus Proven Freelance Strategies
by Matt Matasci
You May Also Like
January 30, 2023 Best Mileage Tracker Apps of 2023
by Lisa McGreevy
January 30, 2023 6 Ways to Land a Job With Little-to-No Experience
by Larissa Runkle
January 26, 2023 Experts Explain How Creating an LLC Is the Smartest First Business Move
by Larissa Runkle
January 25, 2023 Netflix and Earn: 10 Easy Ways to Get Paid to Watch TV
by Robert Bruce
6,878,387 245,248 1,200,000 171,689 2,895,843 1,587,621 8,250,076