Tyler Hooff was working in a restaurant in New York City 10 years ago, when he found out his friend bought a Siberian husky.

Hooff grew up with other Arctic dog breeds and was excited to meet the husky — but was shocked to see the dog was overweight and out of shape.

Huskies need hours of exercise, and with a relatively sedentary owner and typical cozy New York apartment, the dog was forced to be a couch potato.

Hooff stepped in and offered to get the dog some exercise. Now, it’s turned into a business that earns him $36,000 for nine months worth of work.

It started out simply with long walks, but Hooff quickly found the dog wanted to do what he was bred to do — run. Fast.

So Hooff hooked the dog up to a harness and had the pup pull him along on his skateboard.

Hooff began mushing the dog —  a sport where lone dogs or teams of them pull a person on a bike, scooter or specially made dry-sled rig — along bike paths and wide sidewalks through New York City parks.

The dog ended up slimming down and gaining muscle tone and the 36-year old managed to make a rapidly growing business out of a little-known sport.

Building a Following of Dog Owners

Other dog owners saw Hooff and the very happy husky and approached him about working with their dogs, too. He realized there was a real demand for intense exercise for high-energy dogs in the city.

So he became an accidental entrepreneur.

“I did a lot of research,” Hooff says. “No one else was doing anything like this, so I was doing everything from scratch.”

He read a series of books on dog sledding and urban mushing. He learned how to train dogs of all breeds to mush safely; the driver has no control other than voice command and potentially a handbrake, so it takes a good deal of work.

From there, Hooff invested in a dog scooter, his most expensive purchase.

The dog scooter, or kick bikes, are created for urban mushing, so they have tall, rugged wheels to handle rough terrain, as well as sturdy necks to connect to the harness and can hold the weight of an adult.

They can range in price, starting at $250 for a barebones version all the way up to $1,000 for a top of the line model. He purchased several X-back harnesses at $30 a piece in various sizes to fit different dogs.

In November 2014, he launched NYC Dog Mushers as an LLC.

He began to get a steady stream of clients. Many he visited on a one-on-one basis while the owners were at work, to give the dog a mid-day break from being cooped up and to get some exercise.

Individual sessions are $120 per day for one dog and include the use of equipment, dog boots for bad weather and a log book. Sessions vary in time, depending on the dog; many can only do a few minutes at a time, while others can run for a full hour.

Hooff recommends owners sign up for just one to two workouts a week to give their dogs time to get used to the new exercise regimen and build muscle.

Owners were thrilled with the results; their dogs were happily tuckered out and content, and formerly destructive dogs now laid quietly at their owners’ feet.

Pictures of Hooff mushing through Central Park began popping up on Instagram and word of mouth grew the business quickly. 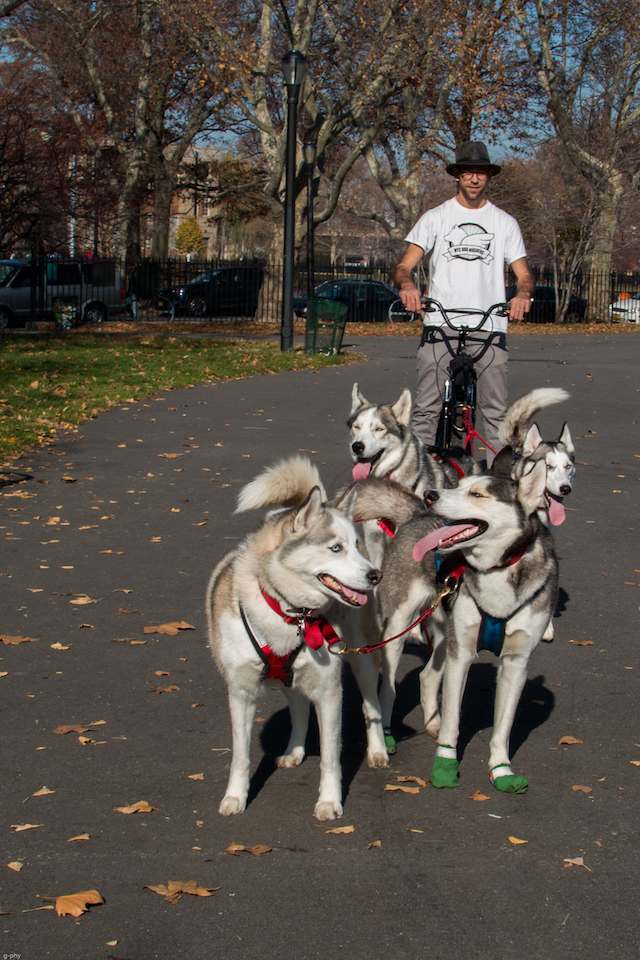 Soon Hooff began hosting one-day workshops on Saturdays, where people interested in mushing could come by and watch or have their dogs try it out for $35.

Hooff partners new dogs with his established canine veterans, who show the others the ropes. He watches each dog carefully — many are out of shape and can’t mush for more than a few minutes.

“I call this canine CrossFit because most dogs don’t get this level of exercise anymore,” Hooff said. “Mushing for fun and exercise isn’t a new idea; it’s just novel in the city.”

Although he’s taking a brief hiatus for family reasons, Hooff usually works about four hours per day on weekdays and eight hours on Saturdays, September through May.

So, for 30 hours each week, he averages $1,000, completely replacing the income from his restaurant job.

Hooff works with different breeds, from classic sled dogs like samoyeds and huskies to pit bulls and golden retrievers.

He requires dogs be at least 30 pounds and in good health. He recommends owners consult with their veterinarians before they put their dog in front of a scooter.

Some owners aren’t thrilled with his restrictions, however.

“I had one owner bring her Shih Tzu, barely 10 lbs,” Hooff explains. “She was outraged when I wouldn’t put him in the harness next to the malamutes and huskies.”

Hooff is careful with all of the dogs, no matter how fit they are.

He refuses to work with aggressive dogs, as it puts him and other dogs at risk. He applies balm to the dogs’ feet to keep them protected and never runs dogs in the summer months, to prevent overheating. Instead, he sticks to general walking.

He also had to get a special insurance policy to cover his LLC.

“This isn’t a business someone can just pick up and start making money,” Hooff cautions. “You need to understand dog behavior and health, or you’re putting your clients’ pets at risk.”

But with Hooff’s specialized knowledge, he has tapped into an unmet need most people didn’t realize they had. What started as a simple hobby has now turned into a flourishing business.

“I didn’t expect this to turn into a money-making project,” Hooff explains. “But teaching dogs to do what they were meant to do helps them realize their full potential.”

The takeaway? Helping people with busy schedules make their lives simpler could be the way to launch a successful business.

Your Turn: Would you try dog mushing? Have you started a creative business?

Kat Tretina is a freelance writer located in Orlando specializing in personal finance. She is also an urban musher with her Samoyed, Anya.