Fill ‘Er Up: How This Family Business Delivers Water to Homes in Alaska

Updated October 31, 2018
Robert Tubbs Sr. pumps water into a tanker on his eighth consecutive 10-hour day of deliveries to customers in Fairbanks, Alaska. He delivers for Water Wagon to homes that don't have access to city water. Tina Russell/The Penny Hoarder

Everyone knows you’re not supposed to leave the faucet running while you brush your teeth.

But how long do you take to rinse off a dish with baked-on lasagna? How much water does your prize-winning vegetable garden need? Does your shower end up running longer than necessary because you got caught up in your “American Idol” audition fantasy?

A lot of us don’t really think about how much water we use on a daily basis. Sure, your bill might go up a little bit next month, but it’s not like you’re going to run out of water or anything.

But for some people in Alaska, using up their water supply is a very legitimate concern.

That’s where a business like Water Wagon comes in.

Water Wagon is a family business that has been delivering water to the residents in and around Fairbanks, Alaska, for a quarter of a century.

And we’re not talking about a jug or two — it’s more like delivering thousands of gallons of water a day to homes that rely on holding tanks.

As the population in the area surrounding Fairbanks has grown, more homes are built beyond the city water system’s reach. Piping through the hilly terrain is not only expensive — sometimes it’s just impractical.

The ground constantly shifts and buckles due to the amount of permafrost, according to Water Wagon co-owner Marita Bunch. That makes piping a logistical nightmare.

Another option for homeowners is to drill a private well — but the cost of that can easily get out of hand. Most wells are 100 to 400 feet deep, and the average price for drilling ranges from $15 to $50 per foot, depending on the terrain. Seeing as how a lot of Alaska’s terrain would be considered difficult, Fairbanks residents can end up paying the high end.

Say you have to pay $50 per foot and dig 400 feet: You’re looking at $20,000 in drilling costs alone. Then you have to add on the extra costs, such as the well pump, piping, permits, water testing, a control panel and wiring, which can run you upwards of $8,000.

And after all that effort and money spent, you could be stuck with water that isn’t quite up to par. Well water in Alaska is mineral-heavy, with high levels of iron and manganese.

The solution? Residents can instead invest in a  holding tank for the property and have it filled up as needed. Depending on the size, holding tanks for residential, potable water use can run anywhere from $100 to $4,000 — which is significantly less than the price of piping in city water or drilling a well.

“It’s necessary for the community in that it’s cost prohibitive to drill wells and you may not get good water,” says Bunch. “It’s a means of getting safe, economical water out of your tap.”

A Day Behind the Wheel

Water Wagon purchases its supply from College Utilities, Fairbanks’ water provider, and then distributes it to customers via trucks that can hold up to 3,800 gallons.

With more than 3,000 people counting on Water Wagon for delivery services, the standard work day is basically a lot of driving back and forth.

The company currently has 10 drivers and one full-time mechanic. They usually send out five to seven drivers a day, seven days a week, and go as far as 40 miles out.

One of those employees is Robert Tubbs, Sr., who is the operations manager in addition to lead driver. He’s been working at Water Wagon on and off for about six years now and uses the service himself.

Tubbs and the other drivers kick off a day of deliveries around 7 a.m. and can work as late as 10 p.m. during busy months. The drivers start with a list of destinations — which Tubbs puts together — fill up the 3,800-gallon trucks, make their stops, then head back to the office to do it all over again.

For some of us, being constantly stuck behind the wheel is a nightmare. But not for Tubbs.

“I like the independence of it,” he says. “I get to go out and work on my own and it’s a secure job… Everybody needs water.”

While the drivers work 10- to 12-hour days, their schedule offers a bit of a reprieve that most jobs don’t: They work eight days in a row, then get the next six off.

Bunch says it’s the ideal schedule for anyone living in Alaska, because it gives them more freedom to go out and really enjoy what the state has to offer.

And as for Bunch’s day-to-day, her favorite part is the customer service. And her least favorite?

Understandably, people can get a bit grumpy if they run out of water.

Unique Conditions in the Last Frontier 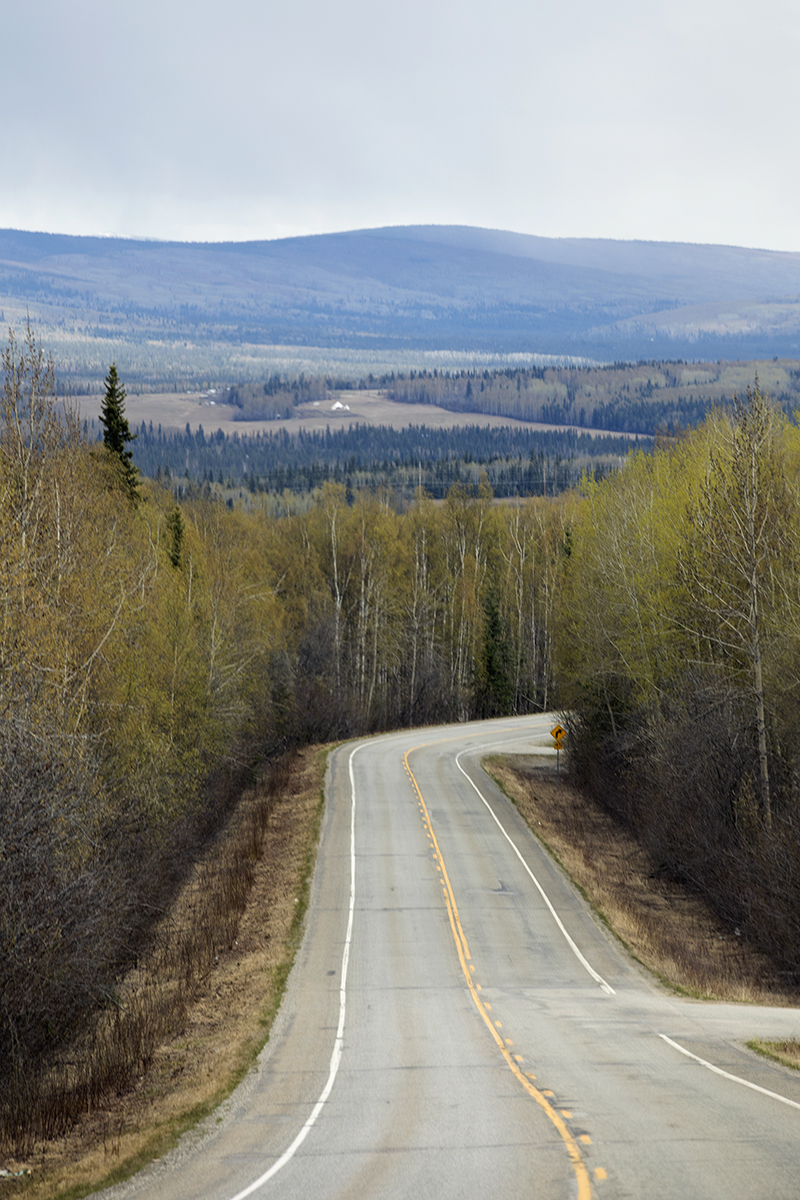 The view of Fairbanks, Alaska from Tubbs' truck as he delivers water to the homes of Water Wagon customers. Tina Russell/The Penny Hoarder

When you live somewhere that has extreme weather, you would expect it to affect operations from time to time, right?

While Fairbanks saw temps as low as minus 35 in January 2018, Water Wagon rarely lets the cold get in the way.

Bunch says the snow is manageable — unless customers forget to shovel their driveways — but rain in winter basically turns the roads into a skating rink.

Water Wagon only had to shut down once or twice in the past few years due to icy conditions, she says, but each time led to a major backlog in deliveries. People still need water even when the roads are frozen over — arguably more so.

Residents are less willing to haul their own water in the winter, partly due to road conditions and also because, unlike the company trucks, their equipment just isn’t built to get the water from point A to point B without freezing.

The customer base ebbs and flows based on the seasons, according to Bunch. While some people stop calling once the snow melts, warm weather brings its own unique group.

“Summertime we have a lot more customers that need garden tanks filled or need their pools filled,” she says. “In the hunting season, we get all the wives calling because their husbands left with the truck.”

Here is a breakdown of the company’s services and what customers pay for their water.

Charging 9 cents per gallon, the auto fill delivery is their most used service, according to Bunch.  They currently have around 2,700 active customers.

They use a computer algorithm to determine when they need to send a truck out to a property. The program analyzes the customer’s last four water deliveries to determine how much is used a day on average, and will typically send a truck to refill the tank when it’s around 20% full.

Their average delivery customer gets two visits a month, according to Bunch. So if a customer is getting a 900-gallon delivery twice a month at 9 cents per gallon, that’s about $2,000 a year in water costs.

For customers who want a little more control of how much they’re getting and when, there’s the special delivery service. Customers can set their own schedule and determine what days Water Wagon will come out.

The price for special delivery is still 9 cents per gallon but requires an $81 minimum — which totals 900 gallons. So if Water Wagon shows up on the date you specified but you only need 400 gallons, you’ll be charged the $81 regardless.

Customers who have a small tank or need to be home for water deliveries can use this service.

Bunch says the company gets anywhere from 50 to 90 calls a day, some for same-day delivery. If a customer calls by 10 a.m., Water Wagon can typically get water to them by the end of the day.

Call-in has the same fees as special delivery: 9 cents a gallon with an $81 minimum.

The Fill, a DIY Filling Station

For those who want to save a little money or just don’t want to deal with setting up deliveries, there’s The Fill, Water Wagon’s filling station. It’s hard to keep track of how many people use the self-filling service regularly, but Bunch estimates it’s around 2,000.

Whether users just need a few jugs or they’re hauling hundred-gallon tanks to stock up their homes, the cost is 2 cents per gallon. The station is open 24 hours a day, perfect for anyone needing water in a pinch.

So if you ever find yourself in Alaska and wonder why so many pickup trucks are loaded down with large tanks, now you know the answer: They’re full of water.

Kaitlyn Blount is a staff writer at The Penny Hoarder.