Sometimes, you just really want something from the drive-thru.

But have you ever driven past a Wendy’s, perhaps late at night, and suddenly become obsessed with the thought of delicious, hot sea-salted fries?

You make the turn. You’re goin’ in.

The Healthiest Fast Food Under $5 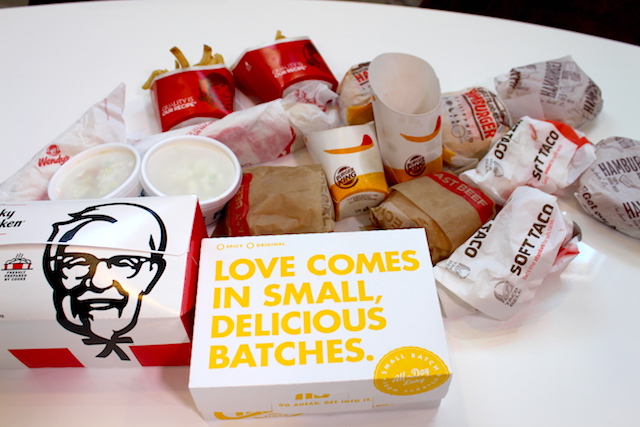 If you’re heading to the drive-thru, health and cost might be the last thing on your mind.

But if you happen to have an arsenal of the items least damaging to your wallet and waistline at your disposal, you might make choices you won’t totally regret an hour from now.

(And hey — even if you don’t, you’ll at least be more informed. Knowledge is power, and fries are awesome.)

So we teamed up with registered dietitian Rebecca Lewis, who works in-house at HelloFresh, to bring you the lightest, healthiest items at 10 of our favorite guilty pleasure fast-food joints — all for less than $5.

You’ll notice that some of our really, really favorite fast-casual restaurants (think: burritos) don’t show up on this list.

That’s because it’s relatively easy to order healthily at Chipotle, Panera and the like — and way harder to spend less than $5 (unless, of course, you’re getting it for free!).

So instead, we picked the greasiest, most unabashedly fast fast-food restaurants — the kind whose lights stay on into the wee hours of the night.

Here’s what to get if you want a cheap but healthy-ish fix next time you make that fateful fast-food stop.

A quick note: Most of these restaurants don’t list their price information online, so we sourced the prices from websites like this one.

That said, it turns out the healthiest items at fast food restaurants also tend to be the smallest — and therefore the cheapest! So you shouldn’t have to worry about spending more than $5 for any of these choices. 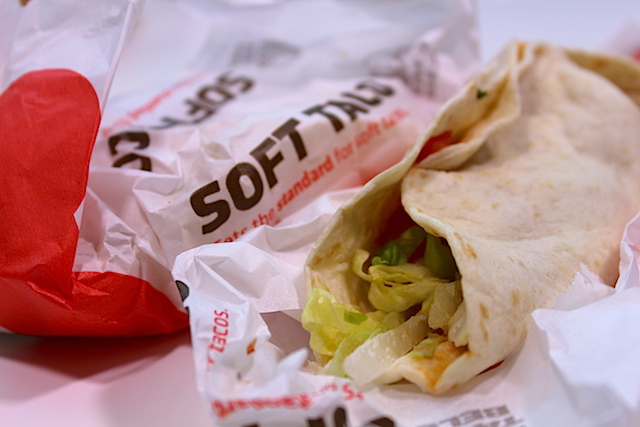 This one had to come first, since it’s our founder’s favorite (love you, Kyle!).

And luckily, it’s one of the easiest fast-food joints to order fairly healthfully at.

“Always opt to order anything on the Taco Bell Menu ‘Fresco-Style’ to reduce calories and fat,” says Lewis.

According to the Taco Bell website, “Fresco-Style means our freshly prepared pico de gallo is substituted for any mayo based sauces, guacamole, reduced-fat sour cream and cheese. This provides about a 25% reduction in fat.”

Lewis’s favorite pick from the multi-item Fresco menu? A shredded chicken soft taco, which comes in at 140 calories, 3.5 grams of fat, 1 gram of saturated fat and 470 mg of sodium.

Plus, a taco’s just $1.19, which means you could make a meal of three of them and still not spend a whole fiver. 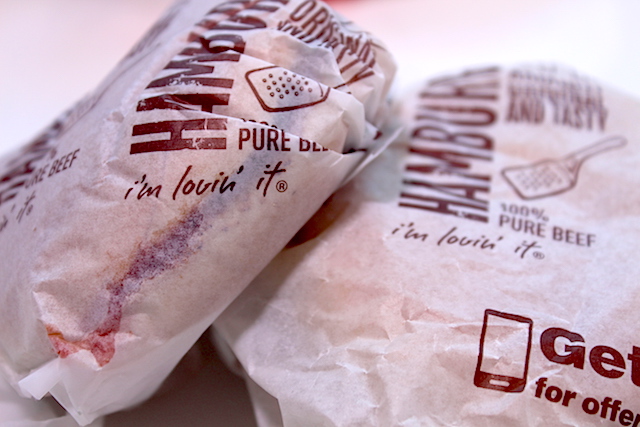 You may think the problem with McDonald’s is all to do with the greasy meat and oh-so-melty cheese on your burger.

But as it turns out, your problem may be more peripheral. Lewis says, “A large source of calories, fat, and sodium in any McDonalds burger or sandwich is the bread!”

Compare a classic hamburger with pickles, ketchup, onions, and mustard — but no bun — and its carb-wrapped cousin.

How do you even pack that much fat into bread? (OK, the answer is butter, but still.) 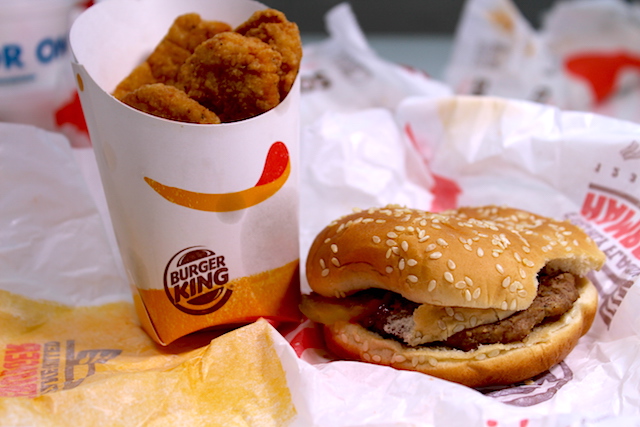 Turns out having it “your way” can significantly increase the amount of fat and calories you consume.

Both of these dishes have fewer than 250 calories and 12 grams of fat — but only if you avoid tempting add-ons.

Lewis suggests skipping the cheese on your next BK burger (and downsizing from its king-sized options). And if you’re more of a chicken nugget kind of person, beware of the dangers of dip.

“The trick here is in the dipping sauces,” Lewis says. “Skip the BBQ sauce, which packs a whopping 310 mg of sodium and 10 grams of sugar!”

“Instead,” she suggests, “keep it classic with the ketchup, which has 125 mg of sodium and 2 grams of sugar.” 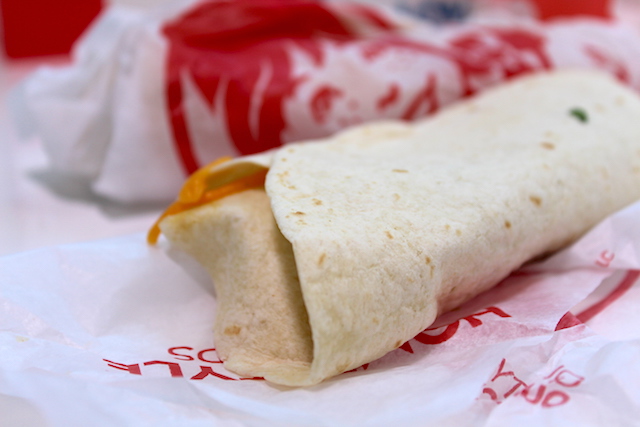 Wendy’s has some surprisingly healthy options, but unfortunately, those crave-inducing sea salt fries are not on the list.

The grilled chicken wrap clocks in at 270 calories and 11 grams of fat, with 3.5 grams of that being saturated — but it still packs 620 mg of sodium.

And if you get the BBQ ranch dressing, you’ll be adding 190 calories, 14 grams of fat and an additional 510 mg of sodium… so maybe take it home and dress it there.

The half-size chicken salad with light balsamic is a great option, although it’s one of the pricier ones on this list: 240 calories, 9 grams of fat, 2.5 of which are saturated, and 520 mg of sodium. 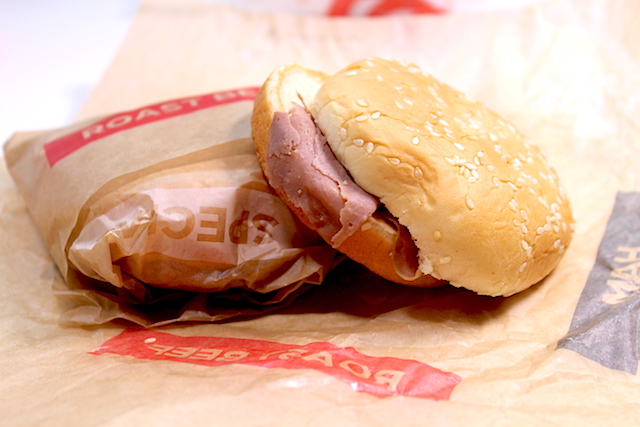 I, for one, have never liked Arby’s — though I have friends who swear by it.

My beef (see what I did there?) with this place: Everything tastes like I’m licking a salt rock. And as it turns out, I was right.

“This one was HARD!” Lewis says. “Everything on the menu is ridiculously high in sodium!”

I don’t want to say I told you so…

If you’re one of the folks who can’t get enough Arby’s, Lewis recommends you stick to the kids’ menu. Its junior roast beef sandwich comes in at 210 calories, 7 grams of fat, 2.5 grams of saturated fat and 530 mg of sodium. 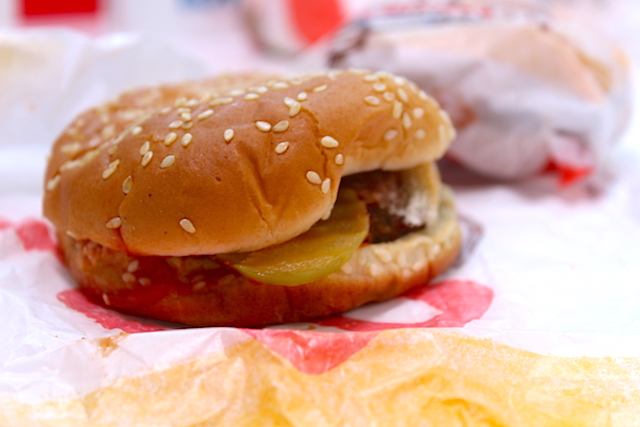 If you’re jumping on the low-carb bandwagon, Hardee’s and its west-coast cousin Carl’s Jr. have some good options — but you still need to think about portion size, Lewis warns.

“Burger buns often are loaded with calories, fat and sodium. Maybe it isn’t the worst thing to leave them off the burger altogether,” Lewis says.

Buns alone can add up to 200 calories, 9 grams of fat and 800 mg (?!) of sodium, so foregoing the bread can be beneficial no matter your dietary preferences.

“Opt for a smaller portion size,” she suggests, “and leave off the cheese to bring the sodium down.”

“Drop the pickles,” Lewis advises, “and you’ll shave another 100 mg of sodium off.” 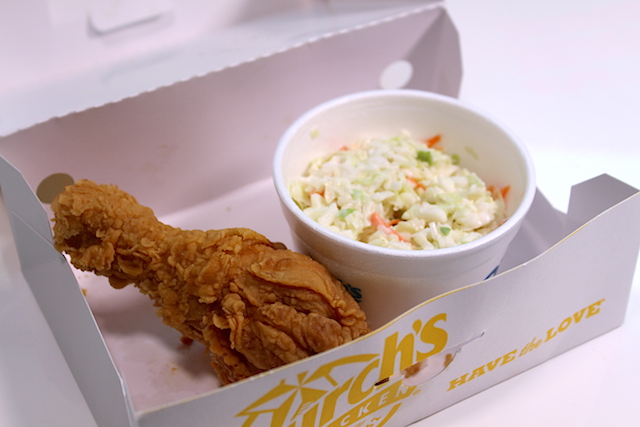 “With reasonable portion sizes, this fast-food joint makes it easy for the menu to work for you,” says Lewis.

Grab an original-style chicken leg off the value menu for less than $2, and you’ll get a healthy meal with 110 calories, 6 grams of fat, 1.5 grams of saturated fat and 280 mg of sodium.

The original breast is another good option, though it’s not generally available a la carte. It’s got 200 calories, 11 grams of fat, 3 grams of saturated fat and 440 mg of sodium.

“Even better — there are veggies on the menu!”

Pick between the small corn and coleslaw to round out your meal with a satisfying, hearty side that’s still under 200 calories.

But again, beware of sauces.

Church’s ranch has 140 calories and 15 grams of fat per serving — and we’re only talking two tablespoons. It’s super easy to eat more than that.

Steer clear of the honey sauce, too, which packs 17 grams of sugar into its 80 calories.

“Instead, keep it classic and opt for the ketchup, which only has 10 calories, 65 mg of sodium and 2 grams of sugar,” Lewis says. 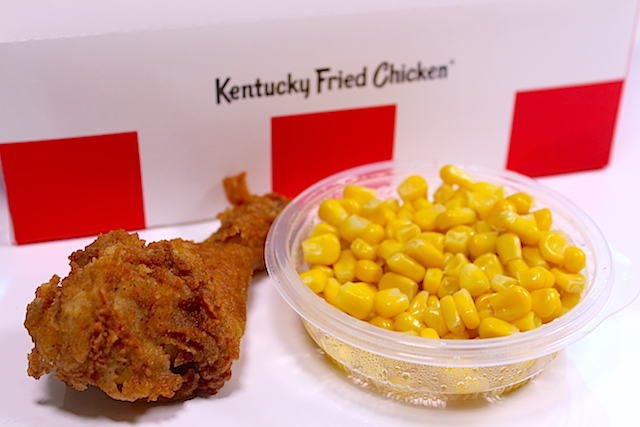 If you try to stay healthy at the Colonel’s, you might end up hungry.

“While a quick glance at the menu may give the appearance of surprisingly good options,” says Lewis, “the portion sizes matching the nutrition are pretty skimpy!”

“That said, you’ll do best… ordering off the ‘grilled’ menu,” advises Lewis — and that’s probably true no matter where you’re eating.

“Bulk out your meal with the veggie options,” says Lewis.

The corn’s got 70 calories, 0.5 grams of fat and no sodium (although you’ll probably want to add some — corn needs salt!).

The green beans have only 25 calories and no fat, but are apparently pre-salted at 260 mg of sodium.

If you’re like me, Sonic is all about the drinks.

And unfortunately, its plethora of drink options are tempting mostly because they pack a whole heck of a lot of sugar.

“Simply stated, we all eat too much sugar on a regular basis,” Lewis says.

“The recommendation is for us to consume no more than 48 grams (which equals about 12 teaspoons) of sugar in a whole day. So special ice cream occasions should be treated as SPECIAL!”

So once again, portion sizes are key — and Sonic’s are supersized. Even the mini is 10 ounces! “Always opt for the mini size,” suggests Lewis. “You’ll still be getting a very generous portion!”

The mini-sized buttered toffee shake has 430 calories, 24 grams of fat and 17 grams of saturated fat, 43 grams of sugar and 320 mg of sodium.

If your sweet tooth is classic, you can keep it simple and go with a dish of vanilla ice cream. The 4.6-ounce serving has just 240 calories, 13 grams of fat, 25 grams of sugar and 140 mg of sodium.

Let’s be real: You’re not getting food food at Dairy Queen. It’s all about the Blizzard, am I right?

“Lower in sugar and fat, these options fulfill a sweet tooth without breaking the sugar bank,” says Lewis.

The banana split Blizzard will run you 280 calories, 8 grams of fat, 5 grams of saturated fat, 39 grams of sugar and 105 mg of sodium.

A small strawberry or pineapple sundae comes in at 230 calories, 7 grams of fat, 4.5 grams of saturated fat, 31 grams of sugar and 90 mg of sodium.

And finally, a classic small cone in chocolate or vanilla has just 230 calories, 7 grams of fat, 4.5 grams of saturated fat, 26 grams of sugar and 95 mg of sodium.

See? Satisfying your sweet tooth and staying healthy don’t have to be mutually exclusive.

Jamie Cattanach is a freelance writer whose writing has also been featured at Word Riot, DMQ Review, Hinchas de Poesia and elsewhere. Find @JamieCattanach on Twitter to wave hello.