How to Save Money on Food: Eating Out vs. Grocery Shopping
see more from Save Money

Eat In or Go Out? Americans Spend More at Restaurants Than on Groceries

If you spent more on restaurants or takeout, don’t sweat it too much. Apparently, we’re all doing it.

Last year, for the first time since the U.S. Census Bureau started tracking the cash spent in each category in 1992, Americans spent more at restaurants and bars than at grocery stores.

The Way We Buy Food is Changing

Restaurants aren’t new. But our reliance on them is growing.

“In 1992 when the Census Bureau started tracking consumer spending on food as part of its monthly report on Retail Trade and Food Services, Americans spent about $162 on food from grocery stores for every $100 spent at restaurants,” said American Enterprise Institute (AEI) scholar Mark Perry.

Last month, we spent $52.5 billion at grocery stores — and $54.8 billion at restaurants and bars. AEI noticed the shift in spending in 2015.

“Food away from home” amounted to about 26% of a household’s food budget in 1970, according to USDA data shared by Quartz. By 2012, that share had leaped to 43% of a family’s food budget. 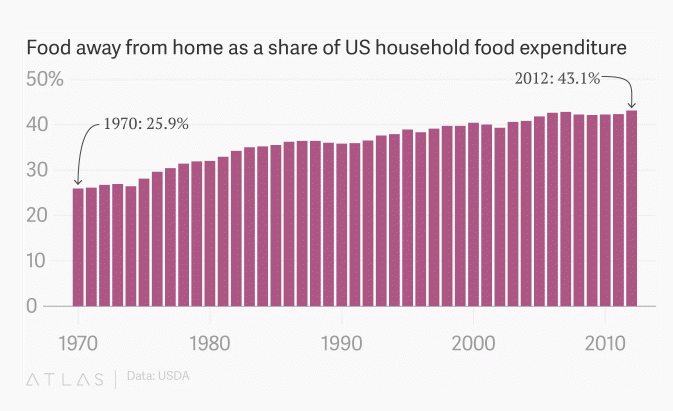 Do You Eat Out More Than You Cook?

If you’re a regular at restaurants and takeout counters, you should be saving as much money as possible.

Have you joined loyalty programs at your favorite spots to dine? Have you found all the nearby places that offer free kids’ meals?

Paying with the right credit card can help you maximize the rewards of enjoying someone else’s cooking. You could even buy discounted gift cards to use for restaurant outings.

If you’re feeling guilty about how much you spend on takeout and restaurants, it’s still possible to change your ways.

Before reaching for the takeout menu, think of the reasons why you keep ordering out instead of cooking. Are you bad at planning a grocery list? Are you too tired to cook?

Once you figure out why you aren’t inspired to prepare meals at home, you can start to work around your food-prep challenges.

If you’re ready to get cozy in your kitchen, there are plenty of ways to cook inexpensive meals without spending hours leaning over a hot stove.

Try using a slow cooker or preparing batches of protein or veggies you can munch on for a few days.

Once you’re comfortable with cooking, you might even find yourself making a month’s worth of meals at a time. All you need to get started, really, is an empty freezer and a meal plan.

Lisa Rowan is a writer, editor and podcaster living in Washington, D.C.