Katherine Lavacca doesn’t have any savings and will have to start paying off student loans this summer.

The 24-year-old journalist works two jobs, doesn’t have a TV and will soon add a third roommate when she moves into a three-bedroom apartment. Still, Lavacca said, she’s living the dream.

In Brooklyn, a borough in one of the most expensive cities in the the U.S., this obviously isn’t an aberration.

“You learn to do without things,” said Lavacca, who works for the New York Post and at Blackbarn, a farm-to-table restaurant that’s roughly a 30-minute train ride to Manhattan from her apartment in Bushwick.

But, according to a Penny Hoarder analysis of the latest local price data from the U.S. Bureau of Economic Analysis, the most expensive metropolitan areas — like New York — are only getting pricier. And at a much faster rate than the rest of the country. 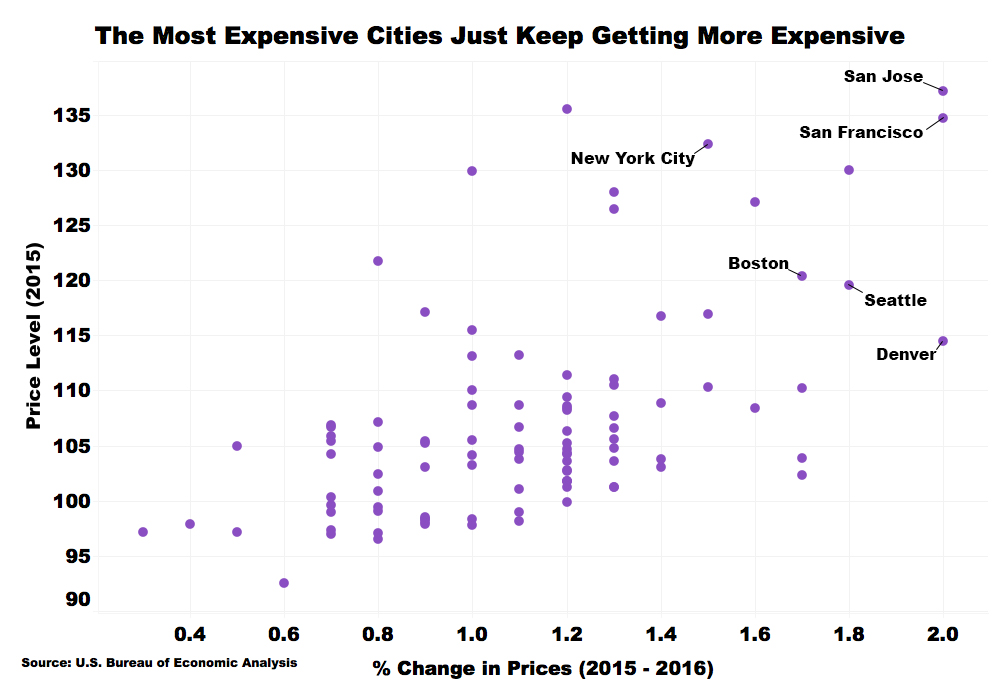 The San Francisco Bay Area has some of the most expensive large cities in the country, and it’s also a region where prices are increasing the fastest, according to the analysis.

Susie Orr, who works for a game developer in Palo Alto, recently moved from that city to Oakland — mainly because of housing prices. It means a 1 1/2-hour commute most mornings for the 32-year-old.

“I think I would describe Oakland as being almost like Brooklyn,” she said. “It’s a little bit cheaper to live there, and there’s a lot of public transportation and a lot of culture.”

San Francisco, San Jose, Boston, Seattle and Denver are among the most expensive cities, with prices rising rapidly. They’re all grappling with a looming housing crisis driven by a lack of affordable homes and apartments, said Urban Institute Senior Economist Laurie Goodman.

For Lynne Williams, who relocated to the Bay Area in 2011, that’s meant moving two dozen times in less than seven years. The 36-year-old, who works for Tesla, has taken advantage of hostels and also split single rooms in apartments and houses, sometimes not knowing whether she’d have a place to sleep on a given night.

“It takes a special kind of person to have that kind of faith that you can bounce around and know you’ll find a place to stay,” said Williams, who is staying north of San Francisco in Concord in a coworker’s spare room for $500.

Goodman said she doesn’t see the cost of living reaching a plateau anytime soon. But she concedes there will eventually be a breaking point for these cities.

In fact, those between the ages of 20 and 34 are actually flocking away from pricy coastal cities toward cheaper metro areas in the South and Midwest, according to an analysis by Indeed Chief Economist Jed Kolko.

“At some point, the day of reckoning becomes when Google realizes they can’t attract new workers because no one wants to work there,” Goodman said. “Despite how much they pay, it’s just too expensive to live there.”

According to recently released data from the Department of Commerce, several of the most expensive U.S. cities are getting pricier at a much faster clip than the rest of the country.

Here are the 10 cities where prices are rising the quickest, and their rank on the most expensive cities list, based on data from 2016. To rank these cities, we used a statistical method to weight the price increase and overall cost of rent, goods and services. So, for example, the the No. 1 city, San Jose, had the highest combination of cost of living and rate of cost-of-living growth in 2016.

The most recent data on local prices shows that the cost of living is being driven up largely by real estate prices. 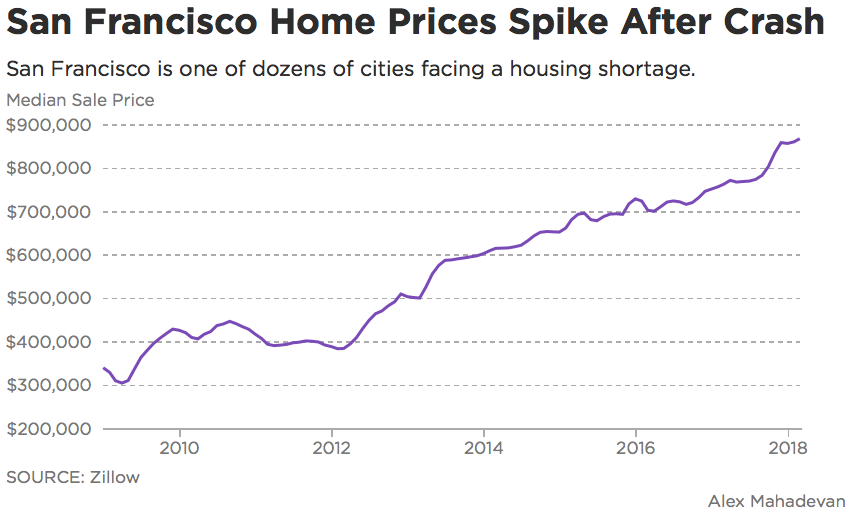 It’s not much better when you look at one-bedroom apartments, which are ostensibly the cheapest option for millennials struggling to thrive in expensive regions. Over the past eight years, the median monthly cost of a single-bedroom rental jumped 47% to more than $2,300.

By contrast, the median household income within the city of San Francisco rose 7.5% to $55,322 between 2009 and 2016, according to the latest available data from the U.S. Census Bureau’s American Community Survey.

But it’s a problem you’re also seeing in dozens of U.S. cities. Zoning laws and building codes are making it tough to create more housing at all, let alone apartments young folks can actually afford.

In fact, in Boston, it’s difficult even for those of means to move near the city center.

And high rental costs mean retailers and other businesses either have to charge more for their goods and services or relocate outside of expensive cities altogether — and that’ll increase shipping costs, Goodman said.

Making it Work Despite a High Cost of Living

While housing economists remain stumped by the looming crisis, those already planted in expensive cities are finding ways to cope with the rising costs.

Orr, who lives in Oakland, said she learned to shop around for the cheapest groceries, which sometimes may be at the farmers market. Lavacca, however, misses her beloved hometown grocery store.

“Living in Florida, you can just go to Publix and do BOGO and eat for a week,” she said. “In New York, it’s almost impossible to do that.”

Lavacca suggests getting a part-time job at a restaurant, since most let you eat for free or half off. Local gardens or agricultural co-ops also provide free, healthy food if you put in a few hours of work, said Williams. Even as a vegan, she can skate by buying in bulk and doing meal prep for the week.

Taking a two-week trial period and staying with friends or at an Airbnb can help you learn the commuting options and give you a good idea whether you can make it on a budget. Oh, and make sure to lowball that budget, because these cities will surprise you with prices, Lavacca said.

Finally, learn to do cheap stuff by yourself. It can bust your budget if you spend a ton of time trying to keep up with your friends’ bar hopping.

Go to do-it-yourself live music shows, which can cost $5 at the door. Enjoy nature for free. Or instead of taking a cruise around San Francisco Bay for $150, spend $14 to take the Golden Gate Ferry.

“Just go see that matinee by yourself,” Lavacca said. “Don’t coop yourself up in your apartment just because you can’t go on extravagant drinking binges.”