I Tried Kim Kardashian’s Shopping App. It Tried to Dress Me Like a Banana

Anyone with at least a modicum of interest in fashion knows the feeling: You see an item of clothing on a celebrity, social media influencer or TV character, and you know in an instant you have to have it.

But finding the look — or something similar at a less-cringey price — can be challenging and time-consuming.

What’s a busy, budding fashionista to do?

Well, there’s an app that wants to help.

Kim Kardashian West is an adviser for a new Apple and Android app called ScreenShop, which invites you to upload screenshots of outfits for convenient fashion matchmaking. Choose to sort results by similarity, price or brand to find a version of the celebrity’s look that works for you.

It’s free to use, with partner brands sharing revenue with the app.

“I’ve never seen an app where you can screenshot something and within seconds bring up a whole digital fashion store to be able to pick out from all range prices and sizes of similar things to what you’re wearing,” Kardashian West told Buzzfeed News.

The idea of being able to find a budget-friendly version of stars’ looks turned this Penny Hoarder’s head. With a database of 10 million products from about 460 stores, it’s got to be foolproof, right?

My Initial ScreenShop Test: Not Even a Little Insta-Worthy

I initially uploaded photos I screenshoted from Instagram: a look from a favorite indie designer and a picture of a yoga teacher posing in chic pair of leggings.

ScreenShop had issues with both of them, showing me only tank tops instead of yoga pants and presenting nary a blouse matching my favorite designer’s offering.

I got a little creative and uploaded a photo of Taylor Swift in a light blue romper at the 2014 MTV Video Music awards. While ScreenShop spit out plenty of rompers, none of them with the red carpet cachet I was hoping for.

Next I tried Rihanna at the 2015 Met Gala, where she had donned an elaborate, luxurious fur-trimmed gown. I expected ScreenShop to offer yellow ball gowns, but all the results were slinky slip dresses that would make me look like a swollen banana if I wore them to the club.

OK, maybe I had taken the experiment too far.

I uploaded an Instagram photo of three news show hosts standing together, hoping I’d get something close to at least one of their dresses. ScreenShop latched onto a black dress with white, vertical, dotted lines that pooled into a wide hem of white dots.

The app generated rows of horizontally striped dresses, but as I kept scrolling, there popped up one dress that was pretty close to one of the dresses. The hem was different, but the silhouette was the same. I considered it a match, and the dupe, which was from NY Collection and available at Macy’s, had a reasonable $60 price tag.

What Happened When I Uploaded Pictures of Myself 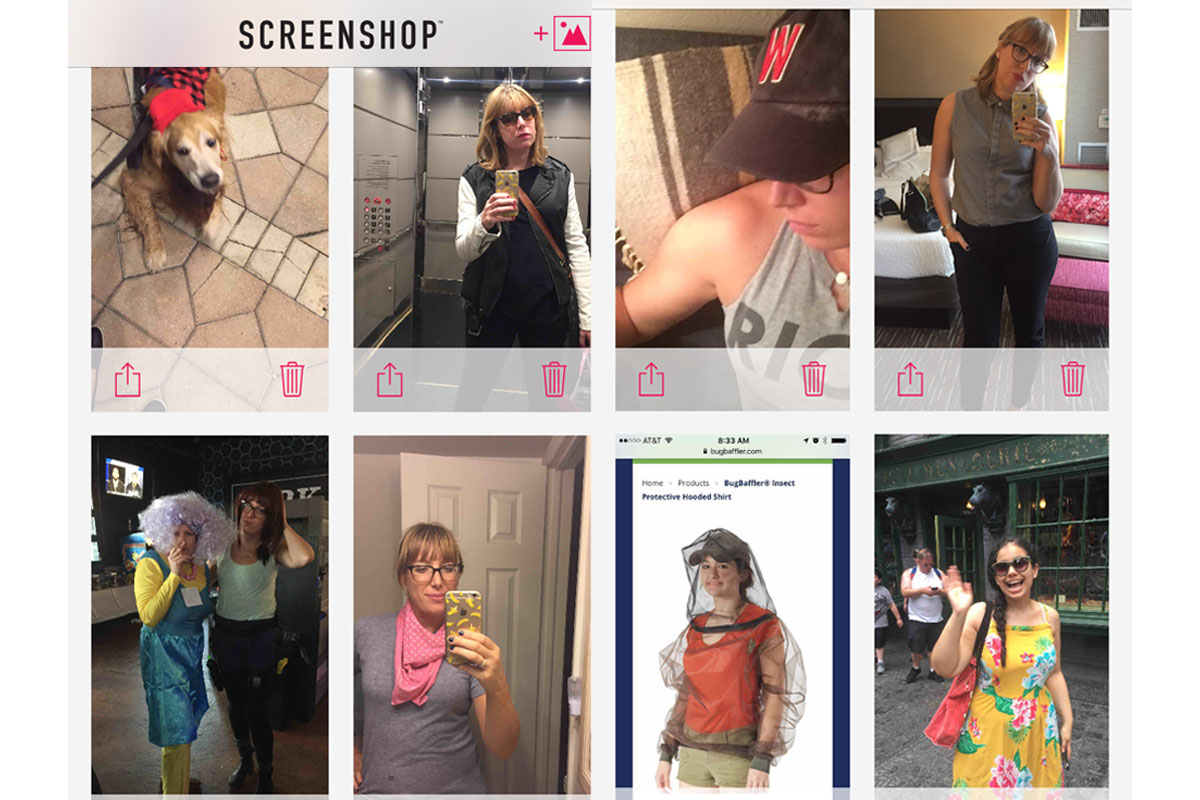 Then this experiment went completely off the rails.

I know where I bought all my clothing and how much I spent, so I started uploading photos of myself and random images from the depths of my phone.

My best friend in an Old Navy sundress got uploaded, as did a random screenshot I had taken of a protective mesh hoodie to keep mosquitos away (#FloridaProblems). Up went my high-school graduation photo, a random workday ensemble, an ‘80s party getup, a leather jacket selfie in the office elevator and my boss’s dog dressed up like a lumberjack.

It couldn’t match my friend’s sundress, although it provided a few alternatives ranging between $10.99 (Forever 21) and $1,495 (Dolce & Gabbana). A gray sleeveless button-up generated green, long-sleeved shirts to browse. My leather jacket photo pulled up lots of leather jackets, but none of them in the two-tone style I had worn. A selfie of me wearing a gray T-shirt and a pink bandanna around my neck resulted in options for maroon men’s V-neck tees. For my ‘80s night portrait, ScreenShop offered bracelets to match the crease in my wrist.

The dog, however, produced plenty of winter beanies to choose from.

Verdict: ScreenShop seems like a magical, glamorous unicorn here to help picky shoppers, but its science isn’t perfect yet. If you like browsing the ShopStyle app, stick with it. If you curate fashion looks on Pinterest, keep pinning. But don’t expect ScreenShop to simplify your shopping life any time soon.

Lisa Rowan is a senior writer and producer at The Penny Hoarder.