Updated September 18, 2018
Kristine Dowhan made over $35,000 in one year, netting $1,200 after expenses, by renting out her St. Petersburg, Fla., home on Airbnb. Tina Russell/The Penny Hoarder

When Kristine Dowhan got a new job opportunity in St. Petersburg, Florida, with her company, she didn’t hesitate.

It didn’t take her long to sell her home in Detroit. She quickly found a foreclosure selling for $30 less per square foot than the rest of the neighborhood in St. Petersburg. It was in one of the safest and best school zones in the county, and it had everything she wanted in the long term: four bedrooms, three bathrooms, and it sat on an easily accessible street and needed little fixing up.

But her list of wants didn’t include a price tag of $455,000. But that’s what her dream house was listed for. She knew this house was too good to pass up, so she decided to go for it.

Why Moving Up Made Sense

But she viewed real estate as an investment.

When she bought her first home in Detroit in 2011, the local real estate market was crazy-cheap.

Dowhan moved back in with her parents after college. She’d used scholarships to pay for most of her degree, so she graduated with no student debt. She saved $30,000 in seven months, and instead of putting a solid down payment on a house in an up-and-coming neighborhood, she paid cash for a fixer-upper.

Dowhan spent two and a half years fixing up her 1,100-square-foot home while also living in it. She washed her dishes in the laundry room, found dust everywhere and lived within half-finished walls.

Much to the chagrin of her family and ex-boyfriends, Dowhan patiently saved up and paid cash for every improvement.

“[I lived] with no countertops for a year and a half because I wanted granite, and I was saving,” she said.

When she became interested in moving to Florida, she looked at real estate for around nine months.

She knew she wanted a house she could grow in; she didn’t want to move again in a few years.

“I [didn’t] want to have to move and give up 6% equity every time, plus the effort of moving and all the things that go into it,” she said.

She sold her Detroit home in three days for her asking price of $90,000. The sale left her with a sizable down payment. Still, she didn’t make enough to qualify for her home loan.

So she paid off every bit of debt she had. She negotiated the price down to $425,000, and she added cash to the down payment beyond what she made from the sale of her Detroit house.

But her debt-to-income ratio was still over the 50% limit set by the bank. Still, she believed she could make it work.

Dowhan knew that first you sign the papers, then comes the mortgage bill. She had more than enough room for roommates. Plus, she had tenure in her company, and if all else failed, she would fall back on her retirement savings.

“The answer at first was roommates,” she said. “The answer was not roommates after I got them.”

Two months after she closed on the house, a young couple moved into one of the rooms. But the roommates weren’t a good fit. She gave them their 30 days’ notice after one month.

Not wanting to take a chance on roommates again, she decided to become an Airbnb host. But there was one small issue: Airbnb guests don’t bring their own beds with them.

She couldn’t afford to furnish three extra bedrooms and two bathrooms so soon after closing.

“With $100 left in my checking account, I made a game for myself,” she said. “Every single piece of furniture I brought in had to be free on Craigslist.”

She got to work and found a free queen-size bed and two twin beds on Craigslist, and that’s what she started her listing with.

The week Dowhan posted the first bedroom on Airbnb, she was continuously booked. Her first guests actually arrived before her roommates were finished moving out.

“They came and I was like, ‘Oh, it’s just my friends. [They’re] just some friends,’” she joked. “They were so confused.”

In addition to scoring furniture on Craigslist, she found that people in her neighborhood were frequently giving away nice stuff. Within six months, she’d switched the queen out for a king. She got another king-size bed and a crib for the second room, plus two day beds and a bunk bed for the third. 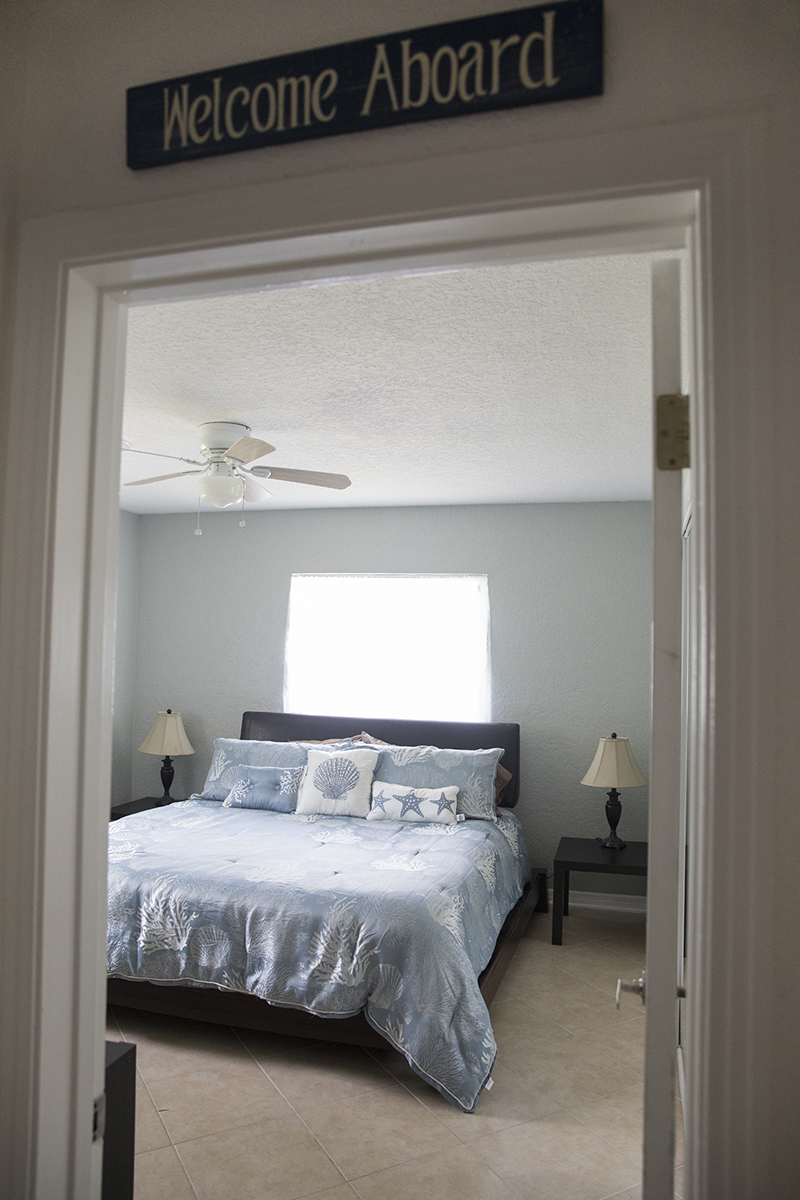 When Dowhan couldn’t afford to furnish her large new home, she turned to Craigslist. I made a game for myself,” she said. “Every single piece of furniture I brought in had to be free on Craigslist.” Tina Russell/The Penny Hoarder

Dowhan knew listing her house as an entire residence, rather than private rooms in a shared space, would get her more money, so she set up her master bedroom to be like a separate residence.

Her bedroom had its own entrance at the back of the house, but she spent a lot of weekends at friends’ houses or traveling. She set up a makeshift pantry in the corner, put in a mini fridge, and had a drawer for all her puppy’s food and leashes for the weekends she was in town.

“It really was like a glorified dorm room,” she said. “But I knew if I put up with this on the weekends, then during the week, I’m living in a half-million dollar house for free.”

To keep this lifestyle sustainable, she limited bookings to a minimum of four nights and maximum of nine. She blocked off weekdays unless weekend guests were staying longer.

Fast forward a year, and her Airbnb business wasn’t just helping her afford her house — it was paying her to live there.

In the first year of being fully operational, she made over $35,000 from Airbnb, netting her $1,200 after expenses.

Dowhan also continued to apply for higher positions at work. When she got them, she kept negotiating her salary. She rented the three spare rooms on Airbnb for 18 months until she got married and finally got that second income to help with the mortgage.

Now she and her husband, Michael, continue to live in and enjoy the house, which is currently valued at over $580,000. They even throw pool parties on the weekend.

Asked if she’d do it again, she said: “The time to take these risks is when you’re young. I would never take this risk if [I was] married. And if we had kids, I definitely wouldn’t have taken the risk.”

Jen Smith is a staff writer at The Penny Hoarder. She gives money saving and debt payoff tips on Instagram at @savingwithspunk.

February 6, 2020 10 Budgeting Apps for Couples That Make it Easy to Share Finances
by Nicole Dow
January 28, 2020 This 7-Day Savings Challenge Is the Perfect New Year’s Resolution
by Mike Brassfield
January 19, 2020 5 Shrewd Secrets from Women Who’ve Fixed Credit, Paid Debt and Made Fortunes
by The Penny Hoarder
December 16, 2019 6 Things You Should Do Now So You Can Crush Your Money Goals in 2020
by Caitlin Constantine