Weight-Loss Motivation: Would You Put Money on the Line?
see more from Make Money Advertiser Disclosure

This Mom Bet on Her Weight-Loss Goals. Here’s How She Could Win $1,300

Updated May 25, 2021
Marcie Hagner is using HealthyWage as motivation to lose weight and possibly make money while she does it. Tina Russell/The Penny Hoarder
Some of the links in this post are from our sponsors. We provide you with accurate, reliable information. Learn more about how we make money and select our advertising partners.

Somewhere between starting a sedentary desk job, taking classes toward her bachelor’s degree, raising her now 8-year-old son and facing a contentious divorce, Marcie Hagner lost track of herself — and her weight.

In October 2012, she remembers stepping on the scale and seeing the number 195.

“It was still 25 pounds more than where I wanted to be,” Hagner says. “But I didn’t feel super bad.”

“It’s been difficult to see pictures of myself,” she says. “And I’m just mortified because of how I look.”

In October 2017, at age 44, she resolved to focus on herself and to get healthy again. For an extra boost of motivation, she joined HealthyWage, a wellness company that pays participants for meeting their weight-loss goals.

Hagner says she’s tried to lose weight before, and had a little success with Weight Watchers and intermittent fasting plans.

“But there was no accountability,” she explains.

Without anything holding her to her goals, she found it easy to fall behind. She stumbled across HealthyWage on The Penny Hoarder and thought perhaps money could motivate her.

Here were the numbers she settled in with:

Three Months Into Her HealthyWage Challenge… 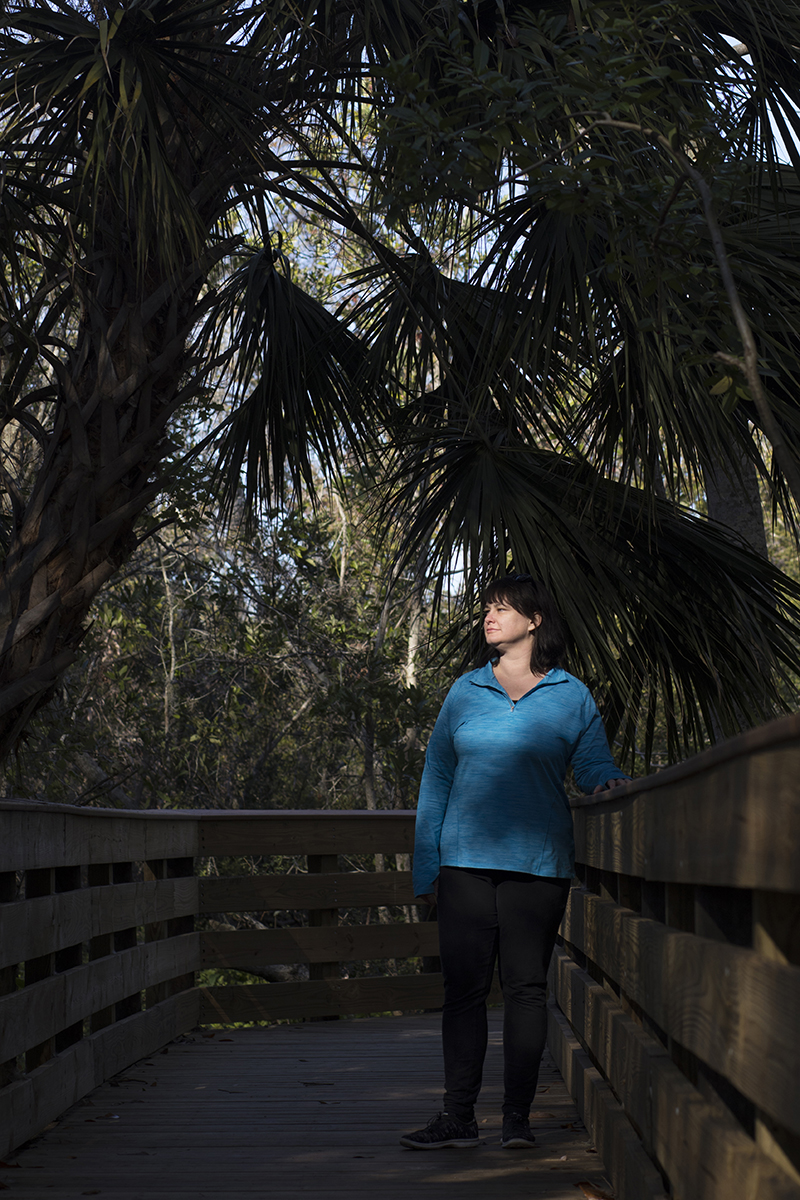 Hagner poses for a portrait at Boyd Nature Preserve. She walks the trails with her son multiple times a week. Tina Russell/The Penny Hoarder

On Jan. 4, I met up with Hagner at Boyd Nature Preserve, tucked alongside Lake Maggiore in St. Petersburg, Florida.

She was three months into her weight-loss journey and admitted it hadn’t been easy. As we meandered through the park’s trails, she explained.

Immediately after she started the challenge in October, she faced a series of unexpected events.

First, she was rear-ended in a car accident. She hurt her shoulder and hip.

Then, one night when she was up late studying for a final, she sneezed.

“It separated my rib,” she says. “It was such a fluke thing.”

And it was super painful.

Shortly thereafter, she was pretend kickboxing with her son Sam. The two accidentally clashed, and she jammed her toe into the door.

“It went snap like a little chicken bone,” she says. She’d broken her toe.

Despite her hardships, Hagner persevered. She found ways to get workouts in — even when she didn’t have time to make it to the gym.

At South Pasadena’s City Hall where she’s an accounting specialist, she parks in a spot as far as possible from the front door. When she gets into her office, she drops a green tea pod into the Keurig. While her tea brews, she does 10 push-ups against the countertop, 10 squats and 10 dips. She’ll do the routine about five more times throughout the day.

She then strolls back to her adjustable standing desk (an item she thanks her employer for), where she spends most of the day on her feet. If she isn’t standing, she’s sitting on her exercise-ball chair. She has also unplugged the printer at her desk and uses the one that’s across the office to get some steps in.

“I just try to incorporate a few more steps each day,” she says. She cites her source of inspiration, a book titled “Small Move, Big Change: Using Microresolutions to Transform Your Life Permanently” by Caroline L. Arnold. It’s encouraged her to think about all her little habits and to practice mindfulness.

This goes for her eating habits, too.

She’s learned to say no to her workplace’s Taco Tuesday tradition at Tijuana Flats and to take-out orders from Chipotle and Chick-fil-A — not to mention all those breakroom treats. She recalls securing the lid to a box of doughnuts to avoid the temptation.

After work, about three times a week, Hagner walks Boyd Hill’s familiar trails with her son in tow.

“He’s a good sport,” she says. “I look at him and tell him I need motivation and that he can help me and come with me.”

Despite these lifestyle changes, Hagner wasn’t seeing the scale budge. She was also feeling more tired and bloated than ever.

She checked with her doctor and learned she has an autoimmune disease, which her doctor is still trying to diagnose more specifically.

She immediately started the autoimmune protocol (AIP) diet. It’s like the paleo diet, but stricter. No eggs, no nuts, no beans, no tomatoes, no peppers…

This, she says, has spawned big changes. She’s feeling healthier, sleeping better and is finally seeing her hard work pay off.

“Especially now, because I’ve seen results,” she says. “And I know what the issue is and how to address it.”

She says the money she’s placed on the line helps her stay on track.

“Money is a huge motivator for me,” she says. “Especially because I don’t have a lot. I don’t want to give somebody $500, especially for something I can control and do.”

Hagner says if she wins the HealthyWage prize, she plans to take a well-earned vacation to Niagara Falls with her son.

With her eye on the prize, she continues to move forward — and counts her blessings that her mom, son and friends are all supportive.

“Now my son hugs me and makes the point of interlocking his fingers,” she says. “I think he’s gauging my progress.”

If you want to see how much money you could make by placing a bet on yourself and your health, enter your goals into the HealthyWage calculator.

Want to learn more? See how three women made a ton of money in our HealthyWage review.

Carson Kohler (@CarsonKohler) is a staff writer at The Penny Hoarder. Marcie has inspired her to take a closer look at her everyday (not-so-healthy) habits.