Hitting the Road? See the Best & Worst Gas Prices by State
see more from Save Money

Hitting the Road This Holiday? These Are the Cheapest States to Buy Gas

Filling up your tank costs less than it did this time last year, but fuel prices remain stubbornly high in some states this holiday travel season.

The national average for a gallon of gas was $3.18 on Dec. 16, down about 14 cents from a year ago, according to data from AAA.

Lower gas prices are being fueled by a decline in worldwide energy demand, which is driving oil prices down.

“If this trend continues, many states could see their average prices fall below $3 a gallon by early next year,” said Andrew Gross, an AAA spokesperson.

Several states have already plunged below $3 on average, including Texas, Oklahoma, Arkansas and Missouri.

Cheaper gas is a welcome holiday gift after a roller coaster year of price flux. Gasoline prices were just over $5 a gallon at their peak in mid-June.

But lower prices aren’t universal. The cost of a gallon of gas remains high in several states. 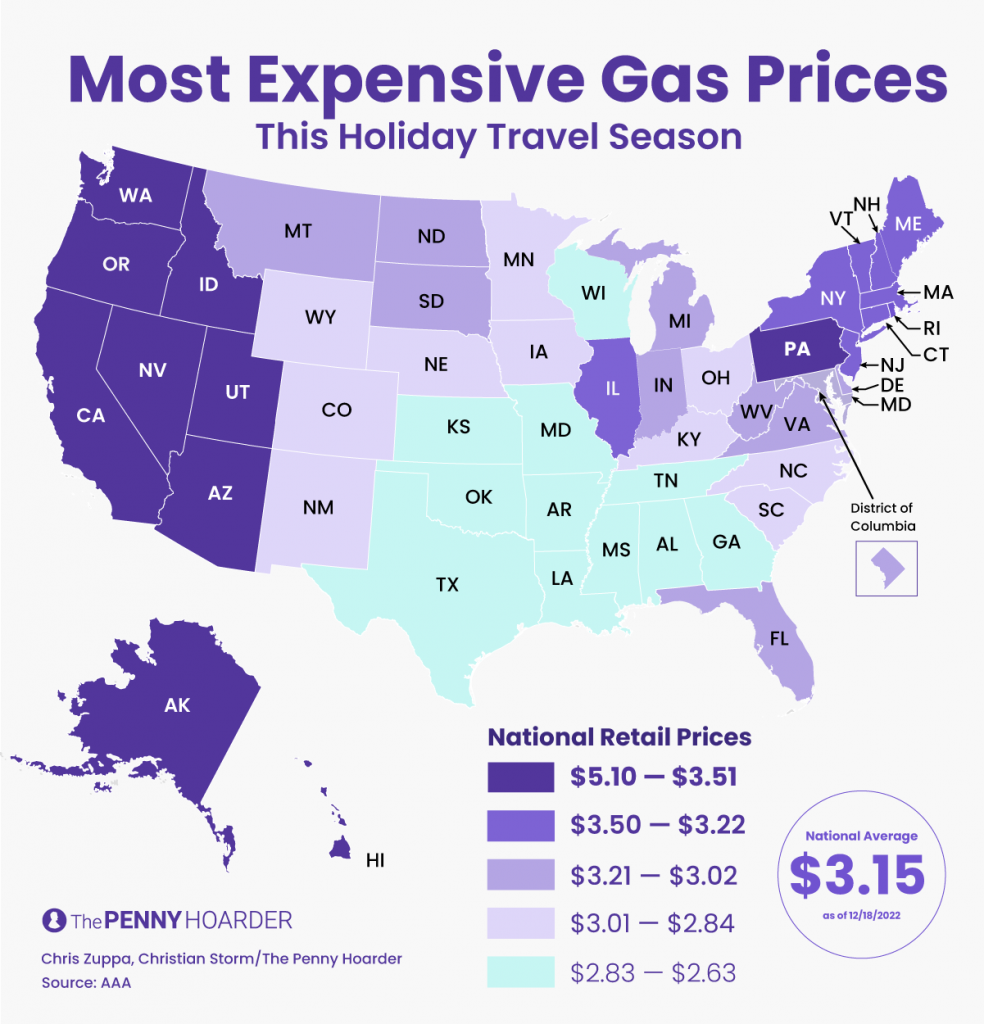 Cheaper gas is a welcomed early Christmas present for the nearly 102 million Americans expected to drive to their holiday destinations this season.

Taking a road trip is less expensive than it was just a few months ago.

Justin Limbach, an engineer from central Nevada, is moving his family of four across the country the week between Christmas and New Year’s.

He says saving money on gas is one of his top priorities.

“We plan on finding Raley’s fuel stations so we can earn gas rewards points,” Limbach explained.

He’s also putting all the moving expenses — including gas — on a credit card that earns 1.5% cash back on all purchases.

“I took it out specifically for the move this month,” he said. “This way it’ll be interest free for 18 months, which gives us some time to pay it off.”

With more people on the roads this holiday season, experts are warning drivers to expect congestion and delays.

INRIX, a provider of transportation analytics and insights, expects the most congested days on the road to be Dec. 23, 27 and 28, as well as Jan. 2.

Nationwide, drivers could see travel times up to 25% longer, according to AAA.

To avoid delays, try to hit the road in the early morning or after evening commute times.

4 Ways to Save Money on Gas

Pain at the pump may be easing but there’s still plenty of ways to save money on gas during the holidays.

1. Use Apps to Find the Cheapest Gas

Gas prices might be trending lower, but if you’re planning a big trip, it’s important to know how to find the cheapest gas along your route.

Several websites and apps, like GasBuddy, show you the cheapest gasoline at nearby gas stations.

Remember: The price of gas can vary significantly across state lines. If you’re trying to save money, avoid getting gas at stations just off the highway or in the middle of a major city.

Stations in those locations tend to charge more than ones a little more out of the way.

Many gas station chains and grocery stores across the country offer discounts on fuel.

GasBuddy also offers its own fuel savings program called Pay with GasBuddy. Join for free, and you’ll save up to 25 cents per gallon when you fill up at most national gas station chains.

Upside is another free app that offers you cash back on each gallon of gas you buy at participating gas stations.

3. Use a Rewards Credit Card

When you fuel up, choose a credit card that pays you cash back or one that allows you to earn rewards points when you purchase gas.

Cruise control can be a lifesaver on long road trips. Staying at a steady speed with cruise control has been shown to save on fuel usage, which saves money on gas.

But here’s a pro tip: When it’s hilly, you might get better mileage without cruise control. The system will tend to downshift too much and waste gas — and no one wants that.

Rachel Christian is a Certified Educator in Personal Finance and a senior writer for The Penny Hoarder.