Digit Review: How This Guy Saved $4,300 Without Trying (2021)
see more from Save Money Advertiser Disclosure

Updated December 17, 2020
Matt Wiley and his wife, Vanessa, have been thankful for the automated savings stash Digit created for them. It’s helped pay for vet bills, their wedding and a big move to New York. Photo courtesy of Grant Gunderson
Some of the links in this post are from our sponsors. We provide you with accurate, reliable information. Learn more about how we make money and select our advertising partners.

“It feels weird saying ‘I saved,’ because I really didn’t do anything,” he says.

Despite his time as an editor at The Penny Hoarder, Wiley admits he’s never been good at putting money away.

“I don’t have a good reason for why it has been difficult, other than I’ve never been good at forcing myself to put money aside to not touch.”

In early 2015, Wiley heard about an automated savings platform called Digit from one of his wife’s friends, who was already using it.

Digit uses an algorithm to calculate how much money its users can afford to set aside each day, then puts the money into a digital savings account. The amount automatically adjusts based on your income and spending habits.

“I was intrigued by the idea of an algorithm pulling money out of my account in ways I wouldn’t notice,” Wiley says. “I was working my first job out of college and basically living paycheck to paycheck, so I definitely hadn’t been putting anything aside. It seemed worth a try.”

So he set out to form his own Digit review.

Wiley set up his account, and he remembers it being straightforward and simple. All he had to do was connect his checking account. Plus, it’s all safe — 128-bit security, what most banks use.

Then Digit started doing its thing, analyzing his income and spending habits and sneaking bits of money from his account every few days.

If Digit ever recognized he couldn’t afford to save one day, it wouldn’t touch his money. This is part of its no-overdraft guarantee, so he’d never be left under water.

“One day could be 75 cents; another, it could pull $30,” Wiley says. It just depended on how much he could afford.

At first, Wiley just wanted to see if he’d notice the money leaving his checking account and if it’d actually stack up in his Digit account.

He felt comfortable signing up because he knew he could cancel Digit at any time and his money would funnel back into his checking account. Plus, he knew he could forgo automatic withdrawals if certain months proved tighter than others.

But, because of the calculated savings plan tailored to his account, the money quietly stacked up. He signed up in May 2015, and by the end of that year, he’d already set aside $607.

And that’s not unusual. Since its inception, Digit users have saved $1 billion on the platform, its CEO told Tech Crunch.

Although you have the option to, Wiley never set a specific goal. He just wanted to have some sort of emergency fund for those inevitable, just-in-case life events.

And of course those happened — in the form of unexpected vet bills, wedding expenses, travel and, most recently, a move from Florida to New York City.

“If I’d never touched it, I’d have an extra $4,300 right now,” he says. “It sucks that I don’t, but Digit helped me have money for whatever life events came up.”

So yeah, Wiley the Bad Saver did withdraw money from his Digit account, which you can do whenever you need to — like if your next paycheck is just too far away. He’s fortunate he actually had that money to withdraw. Otherwise, he would have been forced to rack up credit card debt.

For him, the $2.99 monthly fee was worth having that money saved when he needed it most. That fee was nothing compared to credit card interest or overdraft fees. And it’s a lot less than Netflix, he noted.

Here’s How to Save Automatically With The Digit App

Before you sign up, note the $5 per month service fee (though your first 30 days will be free). For Wiley, this fee — totaling less than $100 over the years — was worth the $4,300 he saved without thinking about it — or ever panicking about his bank balance.

“Way less than Netflix,” he says.

OK, now to sign up, enter basic information and verify your identity with a special code Digit texts you.

Select the bank you have your primary checking account with, then enter your log-in information. (Digit won’t store it.)

It’ll then take Digit a couple of days to analyze your cash-flow patterns.

In the meantime, set some specific goals. For example, start with a rainy-day fund. Then perhaps create a travel stash. You can even set up how much you need and by what date, and Digit will hustle to make it happen for you — without breaking your bank. 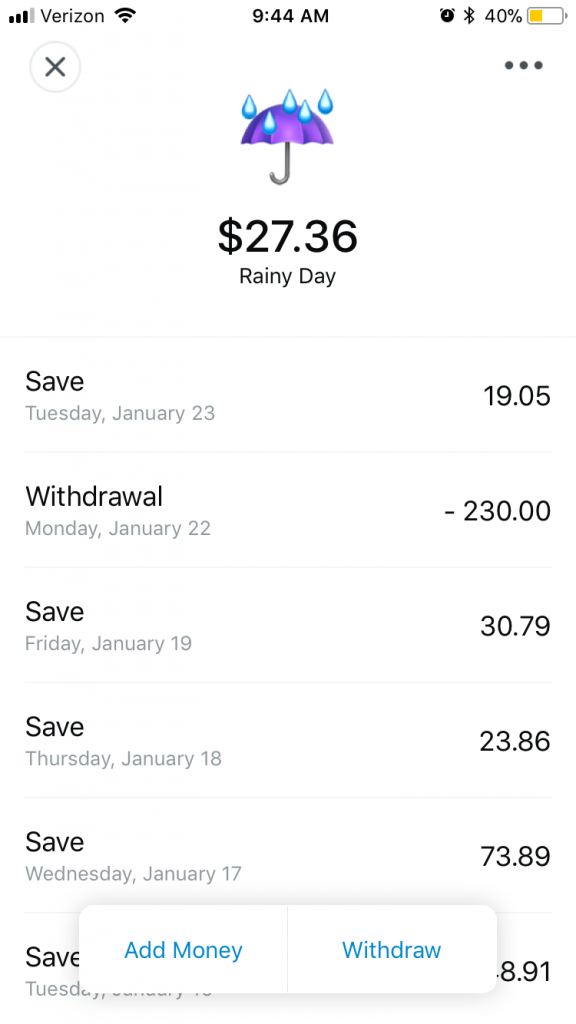 At any time, you can pause saving for up to 30 days. You can even switch out your checking accounts.

And you might have noticed you have some text messages from the service’s textbot waiting on your phone. You can access your Digit account from SMS messages, making it super easy to send commands (like Transfer and Withdraw) and to check your balance. 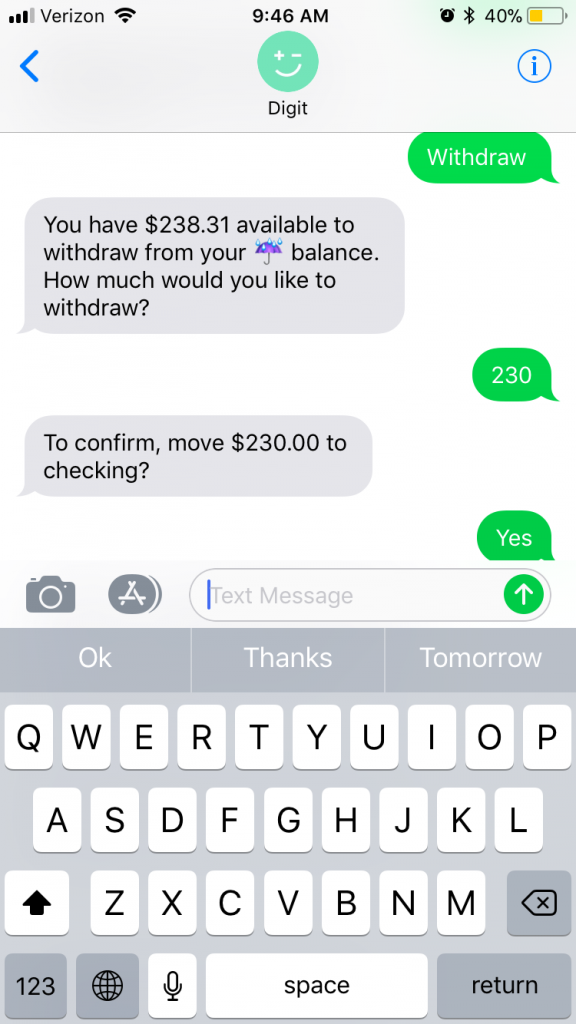 After three years of use, Wiley’s a big proponent of the Digit app.

“I’m definitely a fan of passive saving,” he says. “For people like me [he’s talking about all the Bad Savers out there], not having to think about it is the best way to save.”

If Wiley’s experience in this Digit review sounds like the right fit for your needs, signing up here is super painless.

Carson Kohler (@CarsonKohler) is a staff writer at The Penny Hoarder. She’s a big proponent of sneaky savings. Otherwise, she’d be a Bad Saver, too.