As the U.S. and China trade tariff threats, one thing is certain: Washington, D.C., will likely feel the smallest effects of Chinese tariffs on products we make.

Washington state, however, isn’t so lucky.

The northwestern state is particularly vulnerable to potential taxes on aerospace parts the U.S. ships to China, according to a new report from the Brookings Institution. In total, roughly 150,000 jobs in Washington are within industries threatened by potential tariffs — that’s compared to 216 in D.C.

And other Midwest states, such as Nebraska and Indiana, are vulnerable as well.

“Trade diplomacy can often seem an international and faraway activity,” the report states. “However, when it comes down to specific lists of proposed tariffs on particular products that Americans produce, from ginseng to airplanes, the high-level posturing of Washington and Beijing suddenly gets more real.”

About These Chinese Tariffs … Wait … What the Heck Is a Tariff?

So you may be wondering: What the heck is a tariff? We’ll do our best to explain:

At its core, a tariff is a tax. A tax that countries tack on goods they import from or export to other countries, thereby causing the price of goods coming from that country to rise. At least it’s supposed to do that.

Countries most often impose tariffs for two primary reasons: to protect companies that produce the same product as another country or to retaliate for what they deem unfair trade practices (for example, selling a bunch of steel for super cheap to undercut foreign producers).

So a Chinese tariff on something like soybeans, for instance, makes it harder for U.S. soybean producers to compete with Chinese soybean firms. That could ultimately lead to layoffs in the American soybean industry.

Of course, this is all just speculation for now, since China hasn’t officially launched the new tariffs. But if you live in a state with industries that could be affected, you should definitely keep an eye on this policy situation.

Chinese Tariffs Could Have the Largest Effect on These States

The Brookings Institution looked at the 40 U.S. industries responsible for producing the 234 products China has threatened to slap tariffs on. By determining which states had the highest concentrations of jobs in these sectors, we can see the areas of the country that are most vulnerable to the proposed Chinese tariffs.

The most at-risk industries include aircraft manufacturing, plastics manufacturing and fruit and nut tree farming, among others.

“Our top line estimates suggest while the total number of jobs potentially disrupted by an all-out trade war remains modest, the count encompasses a diverse and shrewdly chosen ‘hit list’ of hallmark American industries — one that appears well-calculated to scare both red and blue America,” the report states.

Here are the five states most exposed if China follows through with its proposed tariffs: 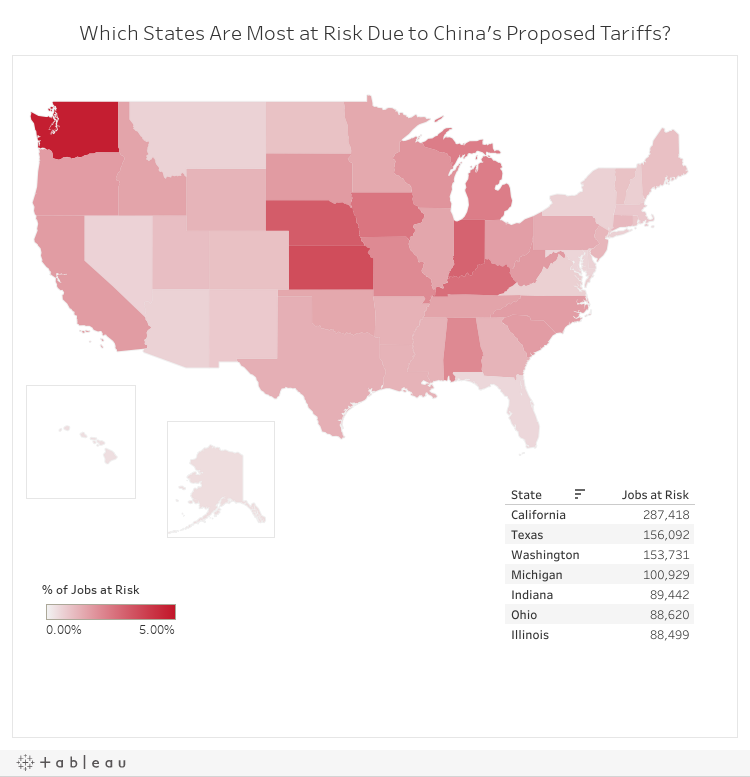 Again, China  has only proposed tariffs so far, but as you can see, they could affect a wide swath of the U.S.

Alex Mahadevan is a data journalist at The Penny Hoarder. It took him every ounce of strength to avoid using the phrase “tariff-ic” in this article.