From Banned to Bru: How This Couple Runs a Growler Bar in Florida

Along Gunn Highway in the small town of Odessa, Florida, nestled among subdivisions and colorful strip malls, there’s an A-frame sign with two magical words: Beer Inside.

From the outside, it looks like your everyday local watering hole, but the interior reveals that it’s far from it.

When Christian and Jillian Brugal decided to open their own bar, they wanted it to be unique. That’s why at Bru Florida Growler Bar, you won’t find any “King of Beers” or cans with blue mountains.

What you will find is an assortment of craft beer, cider, mead, kombucha and nitro coffee, all made exclusively in the Sunshine State. And while you can enjoy your drink in a standard pint or flight, the real selling point for Bru Florida is the growler.

Available in 32 or 64 ounces, growlers allow customers to take away their favorite beer to enjoy later.

Bru Florida’s growler system ensures that you get the freshest brew for your buck — and it will last up to three weeks unopened.

The best part? You don’t even have to buy the growler — Bru has a rental program.

Pay a deposit, fill your growler, enjoy your drink, then return it and get your deposit back. Or swap it out for a sanitized growler and fill it with a new brew. That way you don’t have to devote an entire kitchen cabinet to your growler collection.

Christian Brugal always wanted to own a bar.

While the Miami native was a long-time craft beer fan, his wife Jillian was slow to get on board — with both the craft beer and the bar.

But in 2015, Florida passed legislation that made the idea more enticing: Bars and breweries could now legally fill 64-ounce growlers.

With the legalization of half-gallon growlers — widely considered to be the industry standard — the Brugals could open more than just your standard bar.

So when Christian pitched the growler bar idea to Jillian, she actually considered it. After some reflection, she decided they would do it, and even drew up the rough version of their current logo.

“I realized we’re not getting any younger, and if we’re not getting what we want to out of life now, we’ve got to just take charge,” says Jillian. “[I] grabbed a piece of paper off one of those magnetic notepads from the fridge and drew a circle on it, and wrote BRU.”

When she showed that early version of their logo to Christian and declared they were opening a bar, he had a pretty simple response:

The Trials of Trailblazing

Christian was still working as a full-time financial analyst when they started the process, so as soon as he clocked out from his day job, his work with Bru began. Meanwhile, Jillian was working a couple of different gigs to supplement their income, like copywriting and massage therapy, on top of homeschooling their children.

They’ve both been operating at full-speed for the past two years to make this dream a reality. By the end of their grand opening day, they were dead on their feet — or as Jillian likes to say, they were “like road pizza.”

It turns out that there’s a lot that goes into opening a growler bar. And not just any growler bar, but one in Odessa, population 7,859.

“The biggest difficulty we encountered was [reviewers] didn’t know what we were,” says Jillian. “They’d say ‘Well, what’s another business like you that we’ve reviewed before?’ and I’d say,

With so many different types of bars and licensing, just figuring out what Bru was, and then explaining it, was a whole process in itself. Being unique is great for business, but it’s tough on licensing applications when “none of the above” isn’t an option.

On top of the identity crisis, finding a location was difficult because a lot of commercial realtors were reluctant to work with them: They were, after all, first time entrepreneurs with no previous experience in the beer industry.

But Christian and Jillian feel like they really struck gold with their current location. After deciding on it, they had to send letters to every single home within a certain radius for approval because it wasn’t in a wet zone.

“Fortunately, they all seem to love beer, so nobody contested that,” says Jillian, laughing.

Despite the fact that Odessa had never seen the likes of a growler bar before, the Brugals weren’t worried.

Bru is surrounded by neighborhoods, so it draws in a lot of regulars who don’t want to make the trek into Tampa to get a good beer. There are also a lot of schools nearby, which has been great for business — on Fridays when 3 p.m. rolls around, every seat in the house is filled with teachers, kicking off the weekend.

One of the first things the Brugals did after deciding to open Bru Florida was reach out to craft breweries in the state.

They wanted to feature small- and medium-sized breweries and sell products that you can’t get in cans or bottles or that are notoriously hard to find. They received an overwhelming amount of replies and support, but there was a bit of a hiccup.

“We got quite a few responses that were like ‘Great idea,’” says Jillian. “But usually, the second line that followed was, ‘But we can’t sell in Hillsborough County.”

Navigating the distribution laws was a learning process. Bru can’t feature all of the breweries its owners would  like, but there are enough around the state that it doesn’t pose too much of a problem.

Florida’s craft beer industry has been growing year after year, according to the Brewers Association. Top that off with the fact that more than 1.4 million barrels of craft beer are produced in Florida annually, and it certainly looks as if the Brugals’ hoppy offerings will continue to expand. 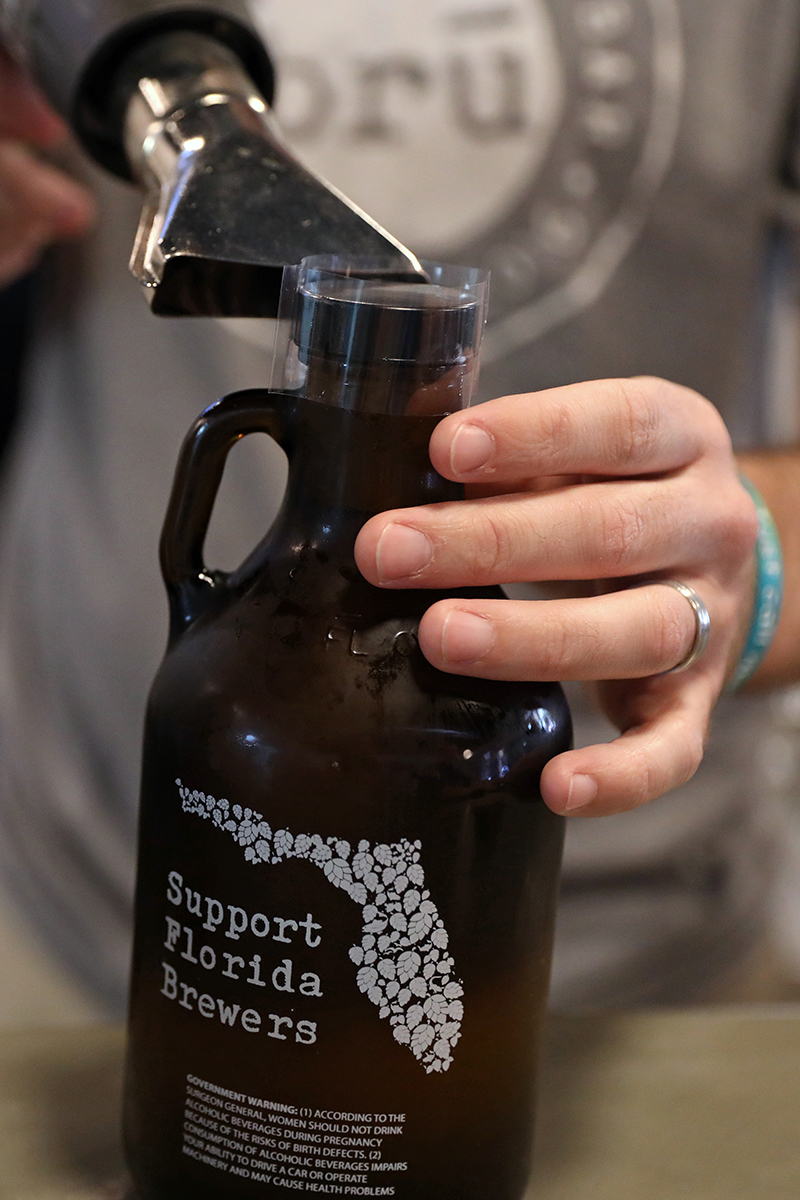 Their entire lineup of 16 taps changes out weekly, and they only buy one keg of each product. That way, customers always get a fresh pour and can expect new options each visit.

Jillian, Christian and their three employees regularly taste the products and read up on the breweries so they can help customers pick out the right drink.

Their approach encourages growler filling: If you really love a beer and know it won’t be there next week, you’re more likely to take a jug home.

They’ve also found a way to still showcase beer that they can’t legally sell: New Brew Tuesday. If they find a brewery that doesn’t have the right distribution license or doesn’t distribute at all, Bru Florida buys a few growlers worth and gives out free four-ounce samples to patrons.

And Bru doesn’t just sell Florida-made products of the liquid variety. The bar features a rotating stock of other locally made goods, from hot sauce to popcorn to pickled okra — yum.

As Bru approaches its one year anniversary, the Brugals are looking ahead.

When they drew up a business plan back in 2016, they made sure to include ideas for the future to ensure business would always be booming.

They crafted a loyalty program that says, “Yes! You CAN buy friendship!” It comes with perks, free monthly growler fills, discounts and lots of swag.

Bru’s owners are also thinking about hiring a social media expert and website designer so they can reach a wider audience beyond those who see the A-frame sign on the road.

Although, if you’ve seen Jillian’s “Weekend Drinking Forecasts” on Instagram, you might agree that they’re doing something right. The videos feature Jillian in a different getup every week, with past homages including Bob Ross and Mr. Rogers.

Overall, the road for Bru hasn’t been the easiest, but the Brugals have loved every second of it.

“We work our butts off, and I haven’t had a day off in years — and my under-eye circles show that,” says Jillian. “But we’re getting there… and on our bad days, we have beer.”

Kaitlyn Blount is a staff writer at The Penny Hoarder. Did you know that peanut butter and jelly beer exists? She didn’t either, until she took a trip to Bru.