Updated November 11, 2017
An empty shopping cart stands next to an old sign for the Kmart Garden Shop at the Crystal River Mall in Crystal River, Fla. Christine Capra worked at this Kmart location until she was laid off when the store closed. Tina Russell/The Penny Hoarder

Many days, Christine Capra gets up, gets dressed and heads to her local library. She’ll stay there from about 9 a.m. to 4 p.m., just as if she’s working a shift at a job.

But for Capra, searching for work has become her full-time job.

Since being laid off from her food management position at Kmart in Crystal River, Florida, back in March, Capra spends countless hours on the public library’s computers or her smartphone, searching for work and filling out job applications.

She says she applies for about 25 jobs per week.

“I have had several interviews with a great resume and some [of the responses] I get is that I am overqualified,” she says. “What is that?”

When a Good Thing Comes to An End

Capra, 51, moved to Florida from Connecticut in late 2007 to help her mother after her father died.

She started working at Kmart in 2011 as a cashier. When the department store opened a Nathan’s restaurant inside, Capra, who has over 30 years of restaurant experience, asked to switch roles.

After a year, Capra was promoted to a management role. She worked at the Kmart for a little over five years total.

But in January, store employees were informed their location would be closing permanently. The closure is one of over 200 Kmart announced as of Oct. 2017, as plunging sales have resulted in its parent company making drastic cuts.

“I felt like someone ripped the carpet right out from under me,” Capra says.

Then, Capra’s unemployment benefits, which were less than half her former salary, ran out in mid-August.

To adjust, Capra had to make some lifestyle changes: no weekly lunches with her best friend, no trips to the movies, no cable.

She’s already tapped into savings. Her brother helps out with expenses for her two dogs.

How is Capra planning to cover expenses without unemployment benefits? “Pray.”

If you’ve been following business news recently, you know that Kmart’s financial woes are not unique in the retail industry.

Sears Holding Company, which owns Kmart, also announced the closure of about 82 Sears department stores this year. J.C. Penney is shutting down up to 140 stores, and Macy’s will be closing 68 stores in 2017.

Large department stores aren’t the only ones shutting down locations: Smaller retailers like Payless ShoeSource and RadioShack announced hundreds of closures this year.

Some retailers aren’t just downsizing — they’re closing up shop altogether. This year, Wet Seal decided to close all 171 of its remaining stores. The Limited shuttered all 250 of its stores, accounting for about 4,000 workers being laid off.

As major anchor stores shut down, shopping malls across the country sit vacant, becoming sad shells where commerce and activity once thrived. While some malls have revamped themselves to keep up with changing times, others struggle to find money-making tenants.

The retail apocalypse isn’t hyperbole when you put the industry’s importance to U.S. jobs in context.

As of September 2017, 15.2 million people work in brick-and-mortar retail in the U.S. That’s nearly 10% of the American workforce.

One factor contributing to the massive loss of jobs is the glut of retail space. There’s enough retail space to fit every human in the U.S. with room to spare — 24 square feet per person.

In Canada, that number is 16, and Germany has roughly two square feet of leasable retail space for every person, according to International Council of Shopping Center data. 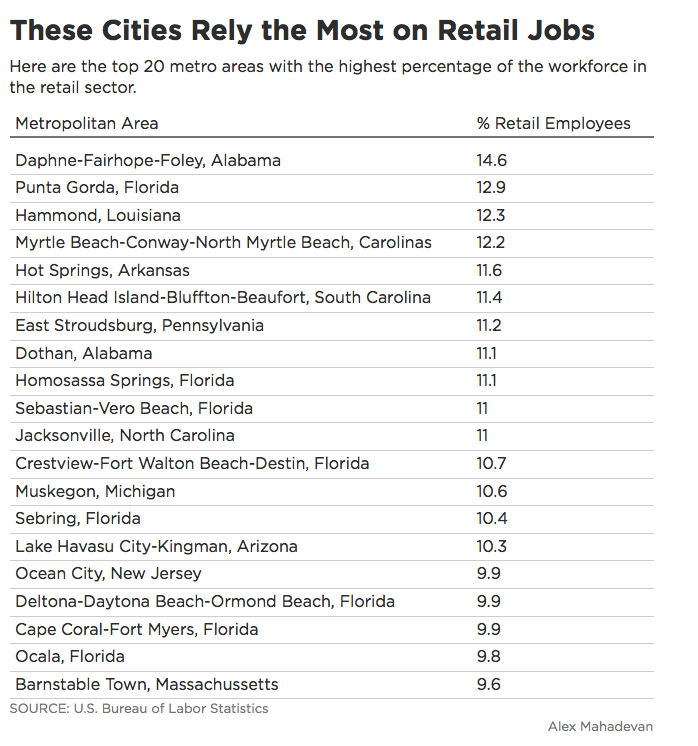 “It’s going to happen fast,” Green says. “It’s going to be across the board. It’s going to be department stores, big-box stores, it’ll be some of the inline mall space — it might be even the supermarket anchored stores as that industry changes.”

Not even our grocery stores are safe.

Yet another factor is the rise of online shopping.

Since 2001, e-commerce has consistently eaten up a larger share of retail sales, from 0.6% in 1999 to 8.5% in the first quarter of this year, according to data from the Federal Reserve Bank of St. Louis.

And e-commerce is becoming even easier to use. This year, for example, the $135-billion company Amazon introduced Alexa, which allows you to order a product just by saying its name out loud.

Now, people go into home goods and clothing stores to try something on, but they buy it on their phones.

“They’re not walking out of the store with it,” Green says. While it may be a sale for the company as a whole, it won’t help pay for the merchandise and massive rental fees a physical store likely pays. “It’s still not a brick-and-mortar purchase.”

The Times Are Changing

Julie Rice, of Hernando Beach, Florida, began her career in retail in 1973. She retired in October 2016, and over the course of her 43-year career, she’s seen the effect the internet has had on traditional retail.

Rice was a merchandise buyer for Dillard’s in the early 2000s when retail stores first launched websites, and then online shopping.

Around that time, she noticed a bunch of consolidation throughout the company and a decline in the numbers of buyers employed.

In 2011, Rice started working in a management position at the Dillard’s at Gulf View Square in Port Richey, Florida. While working at that mall, she watched the J.C. Penney’s anchor close, and then Macy’s.

“There was a lot of stress in the store,” Rice says. “We had another pool of employees to pull from when the other stores closed, and that put a stress on the hourly people in our own store.”

She says she thinks the future of retail is online shopping. But, Rice says, fewer in-store shoppers means a reduced need for staff, and it also means more woes for workers.

Internet shoppers, she says, buy “six or eight of something, especially if they want to try it on. They buy it on the internet, and then they return all but the one they keep to [local stores]. It floods them with unwanted inventory. It makes it very difficult for those stores to make a profit.”

Getting Back to Work — in Another Industry

Though it’s undeniable that the retail industry is undergoing some drastic changes, that doesn’t mean retail jobs are completely gone.

He says at any given time, there are about 3,000 retail positions open in the Tampa Bay market.

Still, for people laid-off from a retail job (or any job), a place like CareerSource is a good resource. Peachey says they assist job seekers with their resumes, soft skills and online job searches.

Individuals can come in and meet with staff members who’ll assess their specific needs — whether that means simply finding new opportunities to apply to or receiving training or education in order to change careers.

Similar career resources can be found in communities across the country. The U.S. Department of Labor’s Employment and Training Administration also provides useful information to assist those laid off from a job.

Whether workers stick with retail or adapt to new careers, they will need to adjust to some change.

Green, the retail analyst, says you’ll see a lot of redevelopment to add bowling alleys, movie theaters and sit-down restaurants for shopping centers to weather the retail apocalypse. And the centers will need to add residential components, apartments or townhomes.

But if a struggling mall redevelops the skeleton of a former Sears or Dillard’s into apartments, what does it mean for the retail workers who once stocked shelves in the department stores?

Will the skills picked up in retail easily transfer over to that of a movie ticket-taker or waiter?

And then there’s this statistic: Since 2010, jobs in the warehousing and storage industry have grown 50%. Amazon may be disrupting the retail industry, but it is also adding jobs in other sectors thanks to its distribution centers.

You can fold a cashmere sweater, but can you drive a forklift?

“There will be a lot of people whose job isn’t terribly relevant anymore,” Green says.

The retail industry might be tumultuous for some, but for others, it’s where their future lies.

After working about 30 years in retail, Mike Bagley, of Tampa, decided to try something new.

In September, he got a job working at a local call center but didn’t find that to be the right fit.

“After a while, I just felt a bit frustrated with it all,” says Bagley, 53.

By the beginning of November, Bagley found himself heading back for the retail industry — and back to a familiar role supervising a shop at the Tampa International Airport.

He’d worked as a retail supervisor in newsstands at the airport from 2009 until he was laid off in April. Construction inside the airport had deterred shoppers from entering stores, Bagley says, and business went south.

After he left the airport but before he landed at the call center, Bagley snagged a part-time job with Target that lasted about a month. It was there he realized working for big-box retailers wasn’t exactly for him.

“All you do all day is just stock, stock, stock, stock, stock,” Bagley says. “I just got to a point where I said, ‘You know, this really isn’t that fun.’ I don’t mind working. I love working, don’t get me wrong. But you also want to have a little fun at what you’re doing.”

Bagley looks forward to the new role at the airport because he’ll be supervising a store selling sports memorabilia instead of working at one of the shops selling newspapers, magazines and refreshments. He’s a sports fan — with a passion for soccer in particular.

He says he has no reservations about going back to retail because he’s accustomed to that line of work. Plus, he says there’s a chance he could branch out to working at a retail shop at one of the local sports arenas.

“There are other opportunities than just working at the store at the airport,” Bagley says. “I’m just looking forward to it.”