Starting a Blog? Buy Your Domain Name -- Before the Trolls Do
see more from Side Gigs Advertiser Disclosure

Updated March 22, 2016
Some of the links in this post are from our sponsors. We provide you with accurate, reliable information. Learn more about how we make money and select our advertising partners.

Disclosure: You wouldn’t believe how much coffee The Penny Hoarder team goes through. This post contains affiliate links for GoDaddy.com so we can keep the grinds stocked!

It is surprisingly common to find politicians who don’t own their name online.

Are you imagining the possibilities?

Come on. A domain costs 10 bucks. Trolls don’t even have to try anymore.

And you’ve had those times when you type a celebrity’s name into your browser and landed on some weirdo’s blog.

They’re just sitting on the URL, as if we’re not all definitely looking for their famous counterpart instead of their sentimental waxing about toe socks and Queen Bey.

Seriously, some famous people need to step up their game.

But in the meantime, I guess the public can enjoy the mishaps that result from their oversights…

Opponents Could Use Your Name Against You

So many politicians do not own their FirstNameLastName.com.

How is this possible? Political positions have enemies built in!

Those clever opponents see an open domain name as an opportunity, and seize it.

CarlyFiorina.org Tells You How Many People She Laid Off at HP

While carlyfiorina.com smartly redirects to the former Republican candidate’s 2016 campaign website, her dot org was left open to an obvious hater. 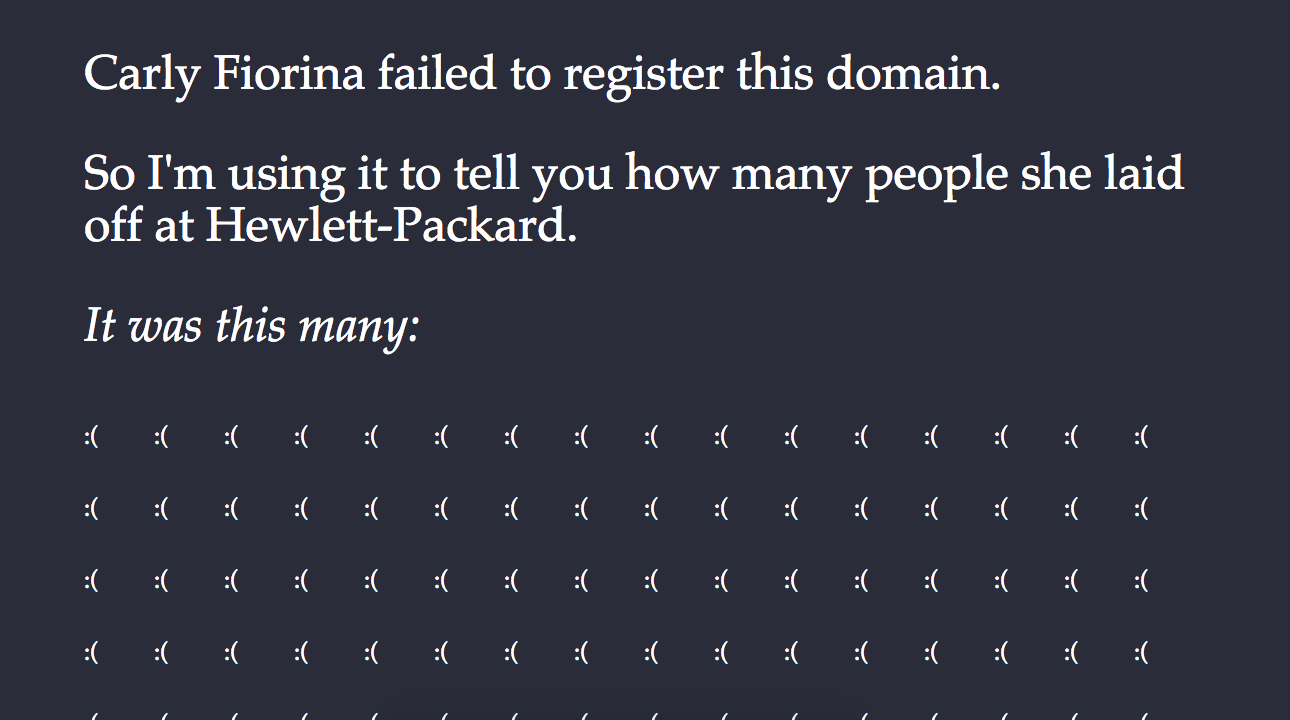 That’s a lot of sad faces.

Though the Republican candidate is an outspoken critic of Barack Obama’s very existence as President, his namesake domain would suggest a different stance.

You’ve been destined to be in the public eye pretty much since birth, but nobody told you to grab your domain name?

Instead of resting in the hands of its rightful owner, JebBush.com now goes the way of your lunch money.

To the biggest bully in the schoolyard.

PETA.org Was Once Home to a Group Called People Eating Tasty Animals

Purchased in 1995, peta.org was famously home to “a resource for those who enjoy eating meat, wearing fur and leather, hunting, and the fruits of scientific research (and more!).”

In 2001, People for the Ethical Treatment of Animals finally sued the other PETA for control of the domain.

Your Domain Name Might Cost a Ton of Money Someday

You may not believe your name is worth much now.

But it could be, one day!

Your Vine could blow up any minute, and fans will want to know more about you.

Buying your name now prevents cybersquatters from swooping in on your 15 minutes of fame and holding it for ransom.

The former Republican candidate (there just seems to be a party trend here…) reportedly had to dish out $100,000 for his domain.

He bought it just before announcing his candidacy, rather than leaving it open to trolls like his opponents did.

To put it into perspective, the Paul campaign only spent $5.9 million. The domain name accounted for 2% of spending for the entire campaign.

And Rand isn’t even a common name.

We’re not sure it’s even a name, really.

Tom Cruise, Celine Dion and Kevin Spacey Had to Fight for Their Names in Court

In the late 90s and early aughts, notorious domain squatter Jeff Burgar beat a bunch of celebrities to the virtual punch — by buying their domain namesakes.

To win control of their names without handing over a ransom, Tom Cruise, Celine Dion, Kevin Spacey, Michael Crichton and other celebrities sued Burgar and won.

You might be the only one with your name in your high school, your social circle or your town.

But the Internet’s a pretty big place.

Chances are, your handle’s doppelganger is out there somewhere.

If you think you’ll amount to anything in this world, get to your domain before they do, so you don’t end up a victim to domain confusion like these:

SteveJobs.com Is This Weird Blog

Apparently since at least 2013 (by which time its design was already sorely outdated), SteveJobs.com has been home to an unintelligible assortment of blog posts.

Readers curious about Apple’s late founder can instead learn about everything from stock trading to fitness to Alzheimer’s care.

James Bond fans will be disappointed to land on the blog of this English teacher in South Korea, who’s fortunate enough to also be named Daniel Craig. 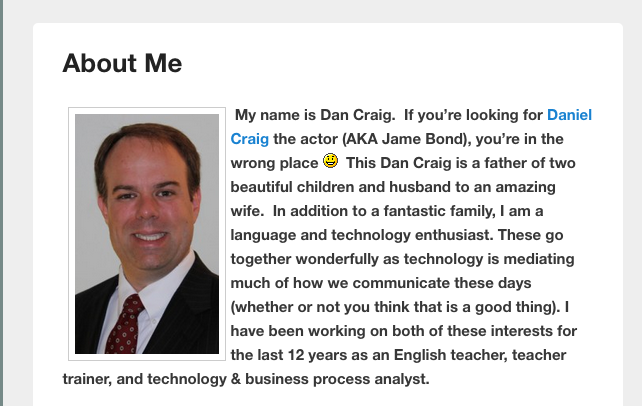 And Just for Fun: The Chris Christie Diet

As dot coms are filled and new uses for the Internet continue to emerge, new domain extensions emerge.

And they’re getting strange… er, delicious.

If you’re bored with .COM, you might consider registering your .PIZZA domain. Or .COFFEE? Are you ready to ‘fess up and just go with .VODKA?

Just like your .COM, your namesake could work against you in these odd cases, too.

Former Republican presidential candidate (yes, another one) Chris Christie has unfortunately left his food domains untouched, and someone has taken the opportunity to create ChrisChristie.diet.

The site pokes fun at the Governor’s infamous weight problem. 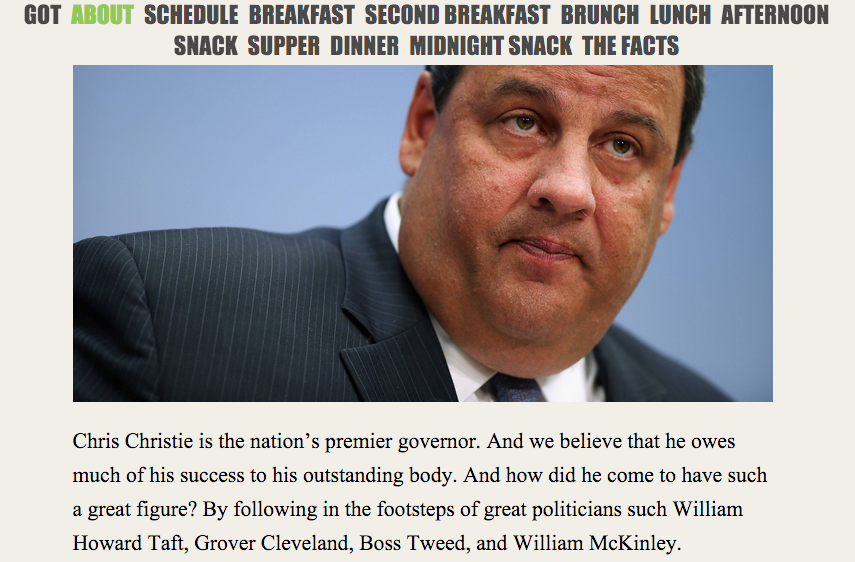 Take Control of Your Name Online

Even if you’re not famous or running for office, owning your personal dot com is a smart (and affordable) move.

You can use your domain name to point to your online resume or redirect anywhere you want.

It’ll also give you some control over what people find when they Google you.

Grab your domain to make sure it’s actually you people find when they search for you.

Don’t doom the world to discovering some disappointing weirdo in your name.

Your Turn: Have you seen any unfortunate domain coincidences? Share your favorites in the comments!

Dana Sitar (@danasitar) is a staff writer at The Penny Hoarder. She also writes about writing, life, comedy and love for blogs and books and sometimes things people care about, like Huffington Post and that one time she had an article published in the Onion.