Smokin’-Hot Growth, Good Salaries and Cheap Rent: These Cities Have it All

It’s no secret that population growth can be a huge economic driver for U.S. cities.

Whether people are moving in from other cities, states or counties or births are outpacing deaths, it means a local economy is growing.

You see an influx of jobs and new businesses. But it could also mean great school systems are attracting new students, parks departments are luring young families or new construction is bringing more buyers to the region.

Today, the U.S. Census Bureau released the latest data that show which major metropolitan areas are booming — and the ones that might be headed for a bust.

In 2017,  Dallas added more than 140,000 residents, with Houston and Atlanta behind it in the rankings. And when you look at net migration, a better indicator of economic growth, Dallas remains on top.

But, we’re The Penny Hoarder, right? So we wanted to dig in and find the cities where people are moving in droves that are at least sort of affordable. That way, if you want to follow the in-crowd on a budget, you have a road map.

But before we get to the list, a few caveats: We used only the 50 most populous metro areas. We also excluded cities with a median age greater than the U.S. average. (We ended up with mostly Florida retiree-heavy cities in our first attempt.)

To find your new budget boomtown, we included the median rent for a two-bedroom apartment and median home prices courtesy of Zillow, as well as the cost of goods and services, courtesy of the U.S. Bureau of Economic Research. We even added the annual cost of living for a couple using the Economic Policy Institute’s Family Budget Calculator and household income from the U.S. Census Bureau.

Here are 10 booming cities where prices won’t leave your pockets empty at the end of the month:

You already know everything is bigger in Texas, and apparently that’s also true when it comes to Dallas. It notched the largest overall population growth along with greatest amount of migration.

And in Big Tex, Dallas has the tallest cowboy in the state to greet all those newcomers.

The temperature may climb to 115 degrees on a hot summer day, but you definitely won’t have to deal with snowstorms like the Northeast is experiencing now. Sounds like a fair trade to me.

They don’t call it “Hotlanta” for nothing. With wages growing at some of the fastest rates in the country, and as a hotspot for work-from-home jobs, Atlanta is a Penny Hoarder favorite for sure.

Plus, if you want to fly there to check it out, it’s likely the cheapest place to visit in 2018.

And, if you’re looking for a career in the tech industry, buddy, Charlotte has a burgeoning tech scene, as well. 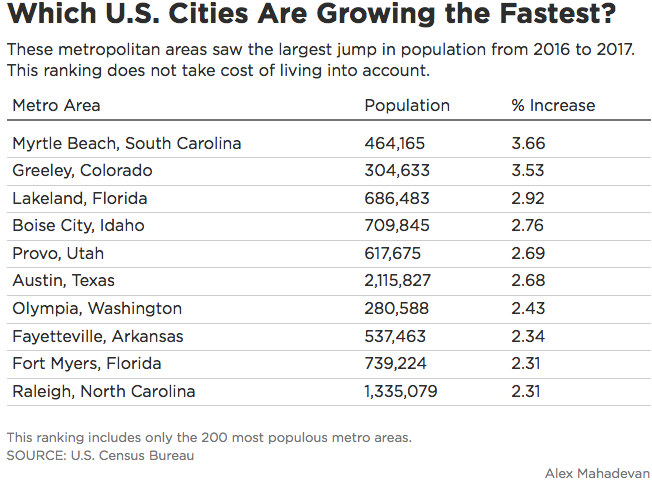 Well, actually, there’s a lot more to the Orlando metropolitan area than you might think. If you lived here, you’d have access to beaches, lakes, breweries and quaint small towns along with the plethora of theme parks.

And if you are ever looking for ways to work from home in Orlando (to pay for those Walt Disney World and Universal Studios Florida tickets), we’ve got you covered.

San Antonio makes another Texas city in the top 10, but there would have been a lot more if we included retiree-heavy towns.

San Antonio may be best known for the Alamo, but it also has killer Tex-Mex cuisine and its River Walk.

If you move to Nashville, you’ll join thousands of transplants in search of a bumping live-music scene as well as that famous hot chicken. (Are you seeing a trend with me and food?)

And even better than that, incomes here are among the fastest-growing in the U.S.

Columbus is one of those sleeper cities that has cropped up on nearly every list we’ve done on best places to live.

It came in close to the top of our list of most affordable cities for millennials, has lots of open jobs while remaining cheap and is a great place to buy your first home.

The big cities in Ohio remain pretty cheap, despite a flourishing economy there.

Despite having net migration on the low end for this list, Cincinnati made up for it with its super-cheap cost of living. Given the data, a couple could conceivably save nearly $30,000 a year in this city.

Las Vegas is on fire  — and that’s not just the sidewalks in the middle of summer.

Since the Great Recession, more people have been flocking to Sin City city each year, with net migration in 2017 hitting an eight-year high. Alas, as one of the hardest-hit areas when the housing market tumbled, this might be a troubling omen as it heats up yet again.

To be sure, these may not be the fastest-growing or most affordable cities, but when you look at the two factors together, they just might be your best bet for boomtowns on a budget.

Methodology: We used a statistical method to compare the regional costs of goods, services and housing through the U.S. Bureau of Economic Analysis and the latest net migration numbers from the U.S. Census Bureau.

We didn’t include natural population growth to ensure we picked only high-performing cities that were attracting new transplants. We excluded metropolitan study areas with less than 733,954 residents and a median age of more than 37.89.