Need a Cell Phone for Kids? This FreedomPop Smartphone’s Only $50
see more from Save Money

Does Your Kid Want a Smartphone for Christmas? This $50 Phone Comes With a Free Monthly Plan

There were few things I wanted more in high school than a cell phone.

When it became clear neither of those things were in my future, I latched on to the idea of a cell phone. Imagine all the friends I could call! Think about how sweet I would look when I flipped it open after class! (Yes, flipped.)

But alas, my parents were not on board. Though it pains me to think about how much cooler I would’ve been with a cell phone, I do not envy today’s kids (or parents).

Because nowadays, that cell phone angst is even worse. Every kid wants one, and at younger and younger ages. According to them, anyone without one is a social pariah.

Which puts parents in a tough position. On one hand, you don’t want your kid to be a social outcast; on the other, you don’t know if you’re ready for them to have their own cell phone.

For one, cell phones are expensive. With the holidays coming up, you can’t afford to splurge on some fancy phone your kid is going to lose or drop in the first week. And that’s not even taking into account the service plan or dreaded overage charges.

Then there’s the whole hooked-on-mobile-devices thing. Once you give your child a cell phone, will they ever look up from the screen again?

While we can’t help with the phone addiction, we did recently learn about an offer that brings down the cost of a starter cell phone. Way down.

The phone costs $49.99, and the accompanying plan is free. That’s right; we said FREE.

Here’s how it works…

The $49.99 Cell Phone That Comes With Free Calls, Texts and Data

It sounds too good to be true, doesn’t it? We were skeptical, too. But we checked it out, and this company is actually legit.

Right now, FreedomPop is offering a special deal just for Penny Hoarder readers: 75% off a Motorola Moto E LTE phone, along with a free service plan.

Here’s what you get with this deal: 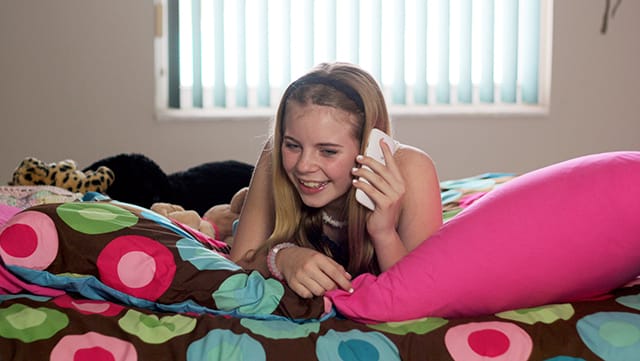 The Moto E may not be the fanciest of phones, but at $49.99 plus taxes (which vary by state), its price is hard to beat.

The phone is pre-owned but has gone through rigorous testing to make sure it’s up to par. It features a 5MP camera (equivalent to an iPhone 4) and 8GB of internal storage — as well as Corning Gorilla Glass and a water-resistant splash guard, making it somewhat kid-proof!

With your phone purchase, you’ll receive one free month of FreedomPop’s unlimited talk, text and 1GB data plan. That normally costs $19.99 per month.

But you don’t necessarily have to start paying $19.99/month once your free month is over. You can switch anytime to FreedomPop’s totally free plan, which features 500 texts, 200 voice minutes and 500MB of data per month.

Or, if you want unlimited talk and text, but you don’t need more than 500MB of data, there’s also a middle-of-the-road option for $10.99 per month.

With WiFi available in so many locations, your child should be able to get by with this plan — if they’re a big texter! — or the free one.

Is This a Good Starter Phone for Kids?

Though it’s obviously up to you to decide when your child is ready for a cell phone, we thought this deal might appeal to parents for a few reasons:

1. This Phone is Cheap to Replace

The Moto E costs just $49.99 to buy or replace, far less than other smartphones. Though FreedomPop does offer an insurance policy for $6 a month, it’s probably not worth it — unless you think your child is going to lose or break the phone within a year.

For parents, this may be the most attractive option of the FreedomPop plan. Once your child reaches their monthly limit of calls and texts, their ability to make more is shut off until the next monthly cycle begins.

As for data, you can set it to shut off once your child is within 100MB of their limit. That way, there won’t be any surprises when your monthly statement arrives!

As you can see in the photos above, this phone is pretty sleek. It’s not some ancient flip phone your child will be embarrassed to use.

4. The Phone Will Arrive by Christmas

If you order by Monday, December 14, your child’s new phone will arrive in time to wrap and put under the tree!

The one downside? FreedomPop runs on the Sprint network, which doesn’t have full coverage in all parts of the country.

You’ll still be able to make calls and texts as long as you’re connected to WiFi, but we recommend checking the coverage map to make sure your area has service. If you and your family travel frequently, or live outside a major service area, then this might not be the best deal for you.

But if your area is serviced by Sprint, and you want a way to appease your child’s cell phone envy and your wallet, then this offer might be worth checking out.

Your Turn: Do you plan to give your child a cell phone for Christmas?

Sponsorship Disclosure: A huge thanks to FreedomPop for working with us to bring you this content. It’s rare that we have the opportunity to share something so awesome and get paid for it!