Gender Transition Comes at a High Cost, but It’s Priceless for Many People

Updated December 13, 2017
Kyle Hollingsworth, who is a transgender male, gets his testosterone shot in his leg by Elizabeth Singh at Two Spirit Health Services in Orlando, Fla., on August 14, 2017. "This is the life I want," Kyle said. "I'm so close to being happy." Tina Russell/The Penny Hoarder

What I need to take:

Kyle Hollingsworth stares at the whiteboard. His eyes scan the words he scribbled in a hurry, then turn toward the rest of his room.

It’s July 25, a Tuesday. He’s been renting the room in the quiet house in suburban Orlando, Florida, since January 2016, when he relocated from South Florida alone.

The room costs him $450 a month, a steal compared with other local monthly rentals. But even that’s holding him back from his most pressing financial goal: saving enough money for the first surgery that will help him transition from female to male on Nov. 16.

He did the math; moving out of this house and into a free room at a friend’s house will help him save the additional $4,225 he needs. If he doesn’t save enough, he will have to pay for his surgery with a credit card.

Only a few boxes from Staples sit near his closet, but they’re empty. He swears his list, be it short, contains everything he will need.

“It’s crazy,” says Kyle. “I did not think it would ever come down to this. But honestly, this is a game-changer.”

Kyle started a GoFundMe campaign in April to raise money for his upcoming “top surgery,” in which a surgeon will remove his breasts and contour a male chest. It will be his first gender reassignment surgery.

Kyle was less than a year into hormone therapy when he made the video, but already, a dark beard lined his jaw line. Wearing a light blue Tommy Hilfiger polo, hair pulled back into a tight bun, he explained why he needs the surgery.

“When your outsides don’t match your insides, it can be brutal,” Kyle said in the video. “It can seriously be brutal.”

The campaign raised $1,845 in just two months, both from friends and anonymous donors.

But on this day in July, his campaign is stalled —  it’s been nearly 17 days since anyone has contributed.

The American Society of Plastic Surgeons reports that 3,256 gender reassignment surgeries ranging from chest, face and genital transitions took place in 2016, a 19% increase from the year prior.

Some insurance companies consider sex reassignment surgeries, also known as gender confirmation surgeries, to be cosmetic, meaning they don’t cover the costs. This often leaves patients like Kyle to fund their transitions out of pocket. With hospital and surgeon fees combined, his top surgery will cost $8,125.

But for Kyle, these costs are small prices to pay.

“I feel very blessed,” says Kyle. “I don’t know how I lucked out to be in the situation I’m in with the people I’m with.”

Growing up, Kyle would wish he was a boy, but he wasn’t. He felt betrayed by himself, his female body, even by God — all things he didn’t understand, having never been exposed to a transgender man.

He was 28 when he saw Aydian Dowling, a bodybuilder, activist and vlogger, compete to be the first transgender man on the cover of Men’s Health magazine.

Until then, he had no idea transitioning from female to male was possible.

“I feel like, only recently in the last two to three years, female to male trans people have been visible,” says Kyle. “Before, it was all male to female — that was all you saw.”

His feelings finally made sense — he was born the wrong gender. About a month after his realization, his then-wife asked for a divorce for unrelated reasons.

The costs of physically transitioning go beyond surgery.

Some transgender people choose to take hormones and remain on them for life. Recently, Kyle’s health insurance company started covering most of his hormone therapy, so his copay could soon be as low as $5 per vial. Depending on the type of hormones and the method of using them (injections, pills or gel), hormones can cost up to $1,500 a year.

Just to obtain hormones, Kyle needed a letter from a psychiatrist, who required four sessions at $70 each before she would write a letter stating he had received the appropriate clinical treatment.

Then, she charged him an additional $70 to write the letter.

What Happens When You Can’t Afford to Physically Transition?

Kyle knows his situation is ideal. He has a steady job and friends willing to offer him assistance.

But the enormous costs of transitioning leads many people to seek cheaper alternatives.

Oftentimes, these alternatives are illegal and can put lives at risk.

When Tia Milan, now 33, purchased her hormones illegally as a teen, she knew she may not be ingesting what was advertised. But at the time, medical care wasn’t widely available for those seeking to transition.

“There’s a risk with everything you do in your life,” she says. “But you have to live. And I wanted to live the way I was feeling inside, so I was willing to risk anything.”

Tia didn’t experience any dangerous side effects from the illegal hormones, but she didn’t know she should have been taking testosterone blockers, as well. As a result, her emotions were heightened; she often found herself crying at stoplights or even while watching Budweiser commercials.

Tia finally got insurance through the Affordable Care Act, aka “Obamacare,” and is now able to legally get the health care she needs, including hormones.

For those seeking affordable body alterations, such as surgery, there’s even more at stake.

Taliyah Cassadine, a 35-year-old trans woman from Atlanta, has performed as a female impersonator for most of her adult life. She entered pageants, but she always finished as first runner-up. It put an enormous amount of pressure on her to transition so she could win.

She scheduled consultations with multiple plastic surgeons for top surgery beginning in 2006; the moment they found out she was transgender, they instantly raised their prices by thousands of dollars, she says. Sometimes, they just wouldn’t call her back.

So she went to an illegitimate provider known as a “pump doctor” for silicone injections. Compared with the thousands she would have spend for a real doctor, she paid only $300 per session for about five sessions. 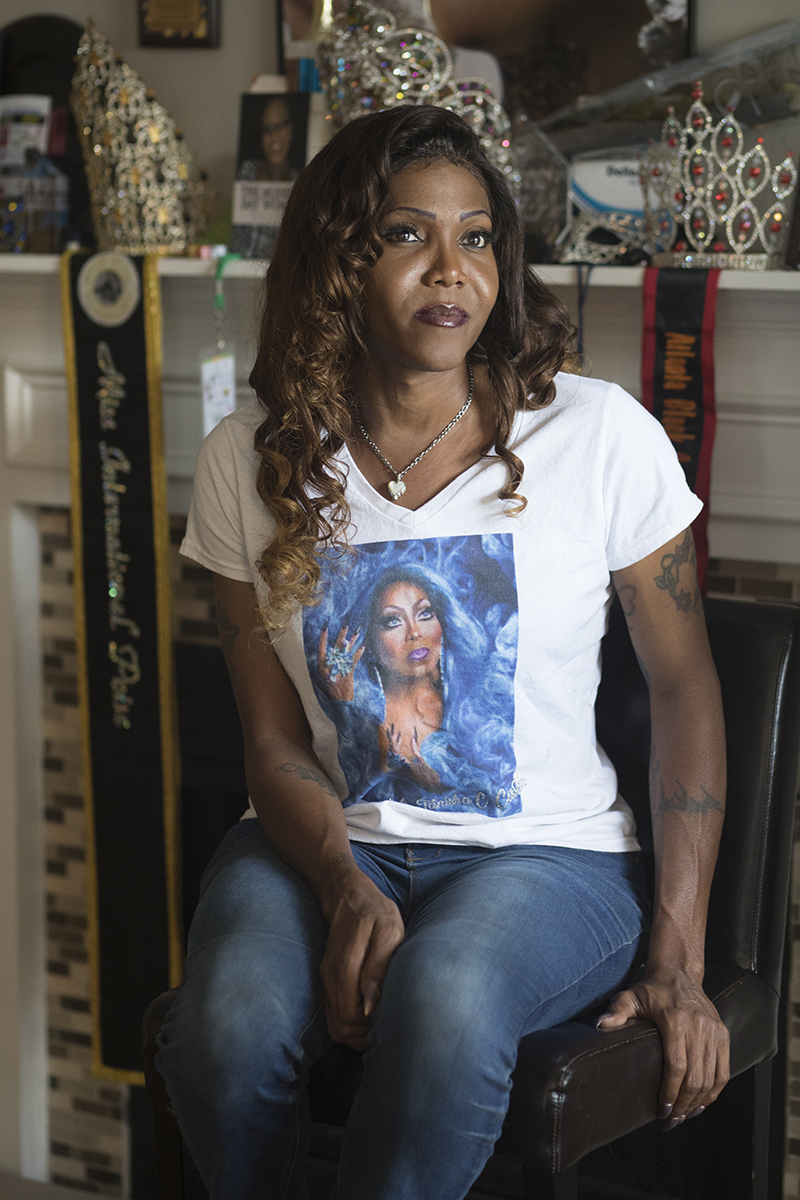 Taliyah Cassadine of Atlanta underwent a double mastectomy after she went to an illegal provider known as a pump doctor for silicone injections. She works six days a week, sometimes even seven, to save up money to have the last bit of silicone removed.

The thing about pump doctors, though, is that the injections they offer are usually only part silicone. According to LiveScience, common additions to the mixture include cement, tire sealant and mineral oils. While the silicone is dangerous enough, these other ingredients can go straight to internal organs and begin to shut them down.

Taliyah started feeling sick. She could no longer walk long distances due to chronic fatigue and started performing poorly at work. Sometimes her temperature would rise to life-threatening levels of around 103 to 104 degrees. Between 2008 and 2015, she was admitted to the hospital at least once a year, but doctors couldn’t figure out what was wrong with her, even though she was upfront about seeing a pump doctor.

Finally, a CT scan finally revealed that her injections were putting her life at risk.

She quickly found a surgeon in Fort Lauderdale, Florida, and had a double mastectomy. It cost her $9,000.

Taliyah was Miss Black Trans International 2016. She is an advocate for healthy and safe transitioning. Her campaign, “Say NO 2 Silicone Injections,” aimed to raise awareness of the dangers of these injections. She created a grant for her campaign to help transgender women transition in healthy and safe ways.

“I learned the hard way that all of our issues have a reason,” says Taliyah. “If you don’t turn an issue into something positive, you’ve wasted an opportunity.”

Kyle’s new room is cluttered with his belongings — clothes are draped over his bedframe. An overflowing laundry basket sits between his dresser and bed. His new room is much smaller than the one he lived in just a few weeks ago, and he still isn’t completely done putting away his things.

Sitting on a sofa in the living room, he scrolls through his GoFundMe campaign and smiles. Over the weekend, an anonymous source donated $885. That, combined with the money he’s saved on his own, puts him on pace to exceed his goal for his surgeon fees. With that donation, he believes he’ll be able to cover the hospital fees on his own.

His family still hasn’t donated, but he hopes they will before his campaign closes. He thinks his family’s “weird money habits” are what’s holding them back from donating. With a few exceptions, his family has been supportive throughout his transition.

After his top surgery, he hopes to use the money habits he’s acquired on this journey — like opening a savings account and refusing to touch it, no matter what — to start saving for a home of his own.

After that, he hopes to start saving for bottom surgery, though he knows it’ll take longer due to the high cost.

For now, though, he’s just excited his appearance will soon be more in line with how he wants to look. With the money aspect taken care of, his biggest obstacle now is losing 11 pounds for his surgery — something he knows he’ll be able to do.

As he walks outside to the driveway, he asks what the date is. He pulls his phone from his back pocket. It’s Aug. 11.

He stares at the countdown app on his phone, then adjusts his glasses.

Kelly Anne Smith is a junior writer and engagement specialist at The Penny Hoarder. Catch her on Twitter at @keywordkelly.