June 8, 2018
Jodie Collins styles hair for clients booked through StyleBee in a San Francisco gym on March 23, 2018. Max Whittaker for The Penny Hoarder

There’s a photo of Jodie Collins at 3 years old.

It’s yellowed and grainy, a product of the early ’90s. Still, the young girl clearly peers into the camera, her mother’s blush brush gripped in her hand. Even at 3, she’s poised to apply the tint with a perfect technique. Collins’ short blonde curls frame her rosy cheeks, which pair well with her painted-on pink lips. Her spotless white sundress indicates she works with precision, not smudging or smearing the makeup. 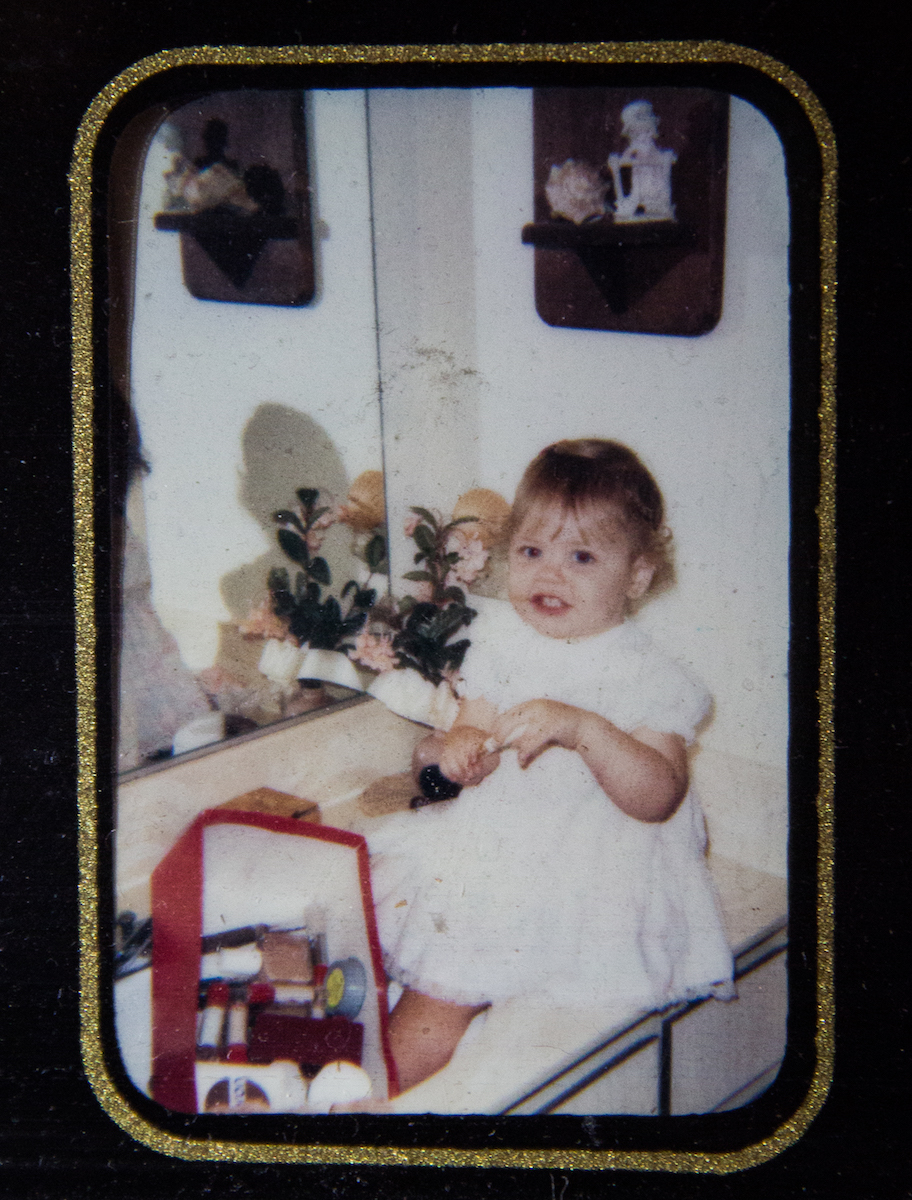 Jodie Collins at age 3 with her mom's makeup brush in hand. Copy photo by Max Whittaker for The Penny Hoarder

It’s been 28 years since her mom captured that moment, but Collins keeps the photo on hand. She’s now 31 and makes a living, in part, as a professional hair and makeup artist. She jokes that she’s going to feature the vintage photo on her business card.

Collins might seem like one of the lucky few who ventured down a clear-cut career path — from applying blush at 3 to doing hair and makeup at New York Fashion Week at 31 — but that’s not the case. She’s faced a number of setbacks that prevented her from barrelling forward.

Even so, she’s managed to overcome these challenges, thanks to her mom’s persistent encouragement, her own will to succeed — and an app called StyleBee.

The Roots of Collins’ Passion for Hair and Makeup

Collins, who lives in Sacramento, says she started deliberately doing her own hair and makeup around the age of 7.

It stemmed from necessity. She was a dancer, even dancing with the Sacramento Ballet for five years. Her mom worked a full-time state job and cared for three children, including a son born with cerebral palsy; she wasn’t able to devote her time and attention to the young girl before recitals.

As a result, Collins took hair and makeup into her own little hands, mimicking her mother’s pre-work ritual, one she’d so diligently studied in the mirror each morning.

This routine continued for about six years, and all the signs pointed Collins toward a career in dance. She was excited about that — dancing was her passion.

But at 13, Collins was diagnosed with Osgood-Schlatter. She describes the disease simply: “when your bones grow faster than your muscles.” She says it typically strikes in your preteen years, when your body is busy growing.

Doctors told her it was time to give up dance.

Collins grieved, but she soon replaced dance with music and eventually joined a traveling music group for eight years. In the summers and winters, when the group hit the road, she settled back into the familiar role of the unofficial hair and makeup artist, even offering haircuts to members.

She was being groomed to become a professional musician — but she knew that’s not what she wanted.

Collins thought of her mom, who’d dreamed of becoming a cosmetologist but whose parents shooed her toward stable state work. As a consequence of her regrets, Collins’ mom always urged her child to “just make it happen” — whatever it was, whatever she wanted to do. For that, Collins is forever thankful.

“That’s been the motto from day one,” Collins says. “I just made that conscious decision and have gone after it ever since.”

Pursuing a Profession Without a Formal Education

Collins is mostly self taught.

After high school, she attended Sacramento City College for a few years where she studied fashion history and apparel. But, three and a half years in, Collins’ mom was diagnosed with breast cancer. The same week her mom underwent a double mastectomy, her brother had emergency brain surgery.

“It just became way too hard to do school and a full-time job and all of that,” she says.

After leaving college, Collins says she channeled her quick-witted Gemini traits and started studying hair and makeup on her own. She has a pile of books she’s collected over the years and says she favors Kevyn Aucoin’s books because the famous makeup artist always took risks.

She studied different styles and techniques — and practiced. From doing her own hair at 7, to doing her friends’ hair for prom, to working at a photo studio and taking on commissioned events, Collins built up her experience and her portfolio.

Eventually, at 27, when Collins had saved enough money, she attended a Paul Mitchell school in Sacramento, where she became a fully certified cosmetologist.

A few years ago, Collins’ set up a salon in a San Francisco co-working space.

There, she was exposed to a number of budding startups and apps, including Venmo. “It was the time of my life,” Collins says.

At that point, she was living in San Francisco three days a week, paying $1,500 a month for her box-sized apartment in the Tenderloin. That’s where the work — and income — was.

Then, she spent four days a week two hours away in Sacramento, where she helped care for Jeffery, her 38-year-old brother who’s a spastic quadriplegic and is completely bedridden.

Financially, this setup wasn’t working. She was making great money in San Francisco, but it wasn’t worth the back-and-forth — and high rent. “I had to cut somewhere,” Collins says. “I had to do something.”

About that time, one of her clients over at the co-working space mentioned an app he was working on called StyleBee. He’d described it as an on-demand beauty app.

StyleBee partners can earn up to $120 an hour doing hair, makeup, nails or even massages. If it’s a big event, stylists can easily make $300, according to Chantelle Hartshorne, a founding member of the platform.

Right now, the platform is live and bookable in Los Angeles, the San Francisco Bay Area and Las Vegas. It operates nationwide when it comes to weddings and larger events, and Hartshorne says it’ll be fully national within the year.

Collins decided to look into StyleBee. It worked similarly to other service-sharing apps, like Lyft, for example. You sign up as an independent contractor, then set your availability. It’s flexible.

Clients then log in and schedule an appointment within the designated times. StyleBee partners meet clients anywhere — at their homes, hotel rooms, office buildings, wedding venues or even backstage at runway shows.

“We can work wherever there’s an outlet,” Collins says.

She met the requirements: She had at least three years of experience, possessed a license to practice, owned a smartphone (mostly needed for the app and to communicate through texts), was older than 18, and possessed communication and people skills. Check, check, check!

She also needed a headshot and at least five portfolio photos.

It wasn’t long before Collins’ was onboarding and heading out to her first gig. After about a year, she became a lead pro artist at StyleBee.

StyleBee proved to be the perfect financial fix for Collins.

She could ditch her pricy lease in San Francisco and make the two-hour drive into the city only on the weekends, when she was available.

Otherwise, Collins lives full time in Sacramento, where she helps care for her brother, who lives with their mom. As her mother grows older, Collins fills in, doing what she can to take over the responsibilities.

“He is just completely bedridden,” she explains. “It’s diaper changing, hand-feeding and medication on the daily. We just go through roller coasters.”

Her family affectionately calls him an amazing ox. “He’s gone through so much, and he has survived, you know?” Collins says.

Collins also cares for her dad, who has congenital heart failure and must adhere to a strict diet.

Because of these responsibilities, Collins says StyleBee has been a huge game-changer for her.

“It’s a win-win situation for somebody like me because I can load myself up on the days where I know I’m not going to have a responsibility with my brother or my mom or my dad or anybody I take care of in my life,” she says.

Looking forward, Collins plans to continue to pursue her dreams through StyleBee.

“I have big dreams,” she says. “I’m just building my empire right now, and it never hurts to make amazing friends and build really strong bridges along the way.”

Carson Kohler (@CarsonKohler) is a staff writer at The Penny Hoarder. There’s a photo of her at 3 standing in her dad’s steel-toe work boots with her mom’s lipstick smeared across her face. She was a mess. Still is, really.